The 4 best, most effective mouthwashes for bad breath (according to published research).

– Several literature reviews have evaluated the findings of studies that have investigated the effectiveness of oral rinses in the treatment of halitosis. Here’s what they’ve concluded about which formulations make the best, most-effective choices.

Which rinses
are the most
effective?

How to use
mouthwash
correctly.

Which are the most effective oral rinses for bad breath?

What has research shown?

If opposed to just relying on advertising claims you’ve instead chosen to research your selection of which mouthwash makes the best choice for treating your breath odors, then that’s commendable. And this page does present the findings of several different literature reviews that have investigated this exact subject.

But as a heads up, if you’re under the impression that there’s a large amount of conclusive scientific evidence about which mouthwash product is the best, most effective one for treating halitosis, you’re soon going to find yourself disillusioned.

Bad breath research – What is the state of affairs?

There’s no shortage of low-quality information.

While yes, there has been a substantial amount of research performed that has attempted to investigate the effectiveness of oral rinses in the treatment of halitosis, much of it is lacking. And most frequently, simply in the way the study was designed in the first place.

An example of what we mean.

We’ll use the findings of the Cochrane Collaboration’s review of mouth rinses for halitosis conducted by Fedorowicz (2008) as a way of demonstrating the quality of research that exists.

For those who don’t know, the papers published by this organization …

For their oral rinses in the treatment of halitosis report …

Whether or not the design shortfalls associated with most of the rejected studies were purposeful (so to create a bias for a manufacturer’s product) is open to conjecture.

But bottom line, and despite what mouthwash advertising claims about which is best, the findings of most studies on this subject can conservatively be stated as being “quite open to debate.”

It bears mentioning that when following the same guidelines for inclusion as the Fedorowicz/Cochrane review discussed above, a more recent literature review involving treatments for bad breath conducted by Slot (2015) encountered the same general difficulty.

Out of 1054 studies identified and evaluated, only 12 met the set standards for inclusion.

Questions to ask yourself about the advertising you see.

For us, it seems that there are two broad questions that the above discussion about a lack of research evidence tends to bring out: 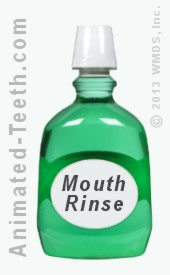 What does research suggest are the best oral rinses for bad breath (in terms of proven effectiveness)?

Based primarily on the findings of the Fedorowicz and Slot literature reviews cited above, the following products and formulations seem to be the ones most convincingly demonstrated by studies to be the most effective in treating halitosis.

a) Which types of rinses stood out?

Both literature reviews concluded that the most compelling evidence (based on a study by Roldan 2003) supported the use of a mouthwash that contained the ingredients:

(Blom [2012] who also authored a review of this subject came to the same conclusion.)

The study determined that after 2 weeks of use this formulation reduced VSC levels, and improved breath odor, but had no real effect on the amount of tongue coating that existed.

Our conjecture: Just imagine what the addition of effective tongue cleaning The real cure. should be able to do for these cases.

What product is this?

Our search of the web only identified a single rinse that had this formulation, Halita®. It’s manufactured by Dentaid, headquartered in Spain.
On their website, we could not identify a USA distributor (there is one in Mexico but not in Canada). We easily found an online source that evidently ships this product from Europe.

We should note that chlorhexidine products characteristically cause tooth staining, tongue discoloration and altered taste. Chlorhexidine side effects.

At 0.05% (about 1/2 the most common prescription formulation in the US which is 0.12%) and with just short-term use (2 weeks in the Roldan study), this might be somewhat less of a concern. But it only makes sense to use this product with your dentist’s supervision.

b) What other rinses were found to be effective?

FYI: The mechanism by which these compounds fight bad breath:

This study found that …

In direct contrast to the Borden study, this one determined that …

This older study confirmed that …

If you need more information about these compounds, read this page: 6 mouthwash ingredients research has shown are effective in treating bad breath. Ingredients to look for.

Conclusions about which is the best mouthwash based on the findings of the above studies.

The above research seems to suggest these points:

a) Look for a multi-ingredient formulation.

The best products typically contain a combination of ingredients rather than relying on the performance of just one.

(Use the links above if you don’t understand the role that each of these approaches plays in curing bad breath.)

b) Even the best research evidence isn’t that overwhelming.

It’s important to state however that all three of the literature reviews cited above only considered this evidence of effectiveness to be “very low to moderate” (Blom) or “weak” (Fedorowicz, Slot). Keep in mind, this is the level of evidence for the best bad breath mouthwash.

We’ll also remind you that this “best” rinse had no significant effect on the amount of coating found on subjects’ tongues. (This is usually the primary harbor of bad breath-causing bacteria in a person’s mouth.)

To us, this is a clear indication that the use of a mouthwash alone (without proper oral home care) is unlikely to provide a complete cure.

Related page: The [simple] 3-pronged approach that it really takes to cure bad breath. The steps.

c) A general ranking of products.

From the above studies, it seems you could reasonably conclude that there’s no overwhelming evidence that favors the use of chlorine dioxide + zinc mouthwashes (like Oxygene®, TriOral®, SmartMouth®) over cetylpyridinium chloride + zinc ones (Breath Rx®).

Additionally, all of the above products and formulations seem to have been proven to be more effective than the use of essential oil preparations (Listerine® and antiseptic mouthwash generic equivalents).

How effective is using a mouthwash, even one of the best ones?

We think the discussion on this page makes it clear that even the best products for treating bad breath probably aren’t as effective as you might have expected or hoped (or promised by advertising claims).

Their use can have a place, and serve a purpose. But mouthwash best used only in conjunction with thorough mechanical mouth cleaning. (Mechanical cleansing means tooth brushing and flossing How to., and tongue scraping or brushing How to..)

So, is it necessary to use mouthwash?

No. Curing halitosis has to do with reducing the number of bacteria living in your mouth that produce VSC’s. And the most effective and efficient way to do that is via mechanical removal (tongue cleaning and also brushing and flossing your teeth).

Then, as an additional step, using a mouth rinse can further assist in killing bacteria that remain or neutralizing the smelly compounds they have created. The same can be said for adjunct products like mints, lozenges, gum, toothpaste, etc… What to look for.

But despite whatever advertising claims you see, don’t expect any type of mouthwash or breath aid to be an effective cure just on its own. That simply isn’t realistic. Rinsing, with any type of compound, can’t remotely compete with the outcome achieved via mechanical debridement.

How to use mouthwash so you get the most benefit from it.

1) When should you rinse?

As a general rule, you’ll get the most out of using an oral rinse if you use it after you have already brushed and flossed your teeth, and cleaned your tongue. Here’s why.

By rinsing after you have already cleansed your mouth, the plaque that still remains will at least potentially have been disrupted and exposed. As a result, it will be more easily penetrated by, and therefore more vulnerable to the actions of, the compounds found in the rinse you are using.

Why you need to gargle as far back as possible so to get at the bacteria that cause bad breath.

When you use a rinse, it’s best to gargle it.
When a person gargles, they should make an “aaahhh” sound. This extends their tongue outward and allows the mouthwash to contact a greater percentage of its posterior region (the area Picture. that usually harbors the greatest number of odor-producing bacteria.)

Note: You should spit out mouth rinse after gargling. Children should not be given mouthwash because of the possibility that they may swallow it.

Besides just focusing on your tongue, you should also swish mouthwash around in your mouth (especially in between your teeth), so its components can create an effect in those locations too.

If you haven’t been there already, don’t overlook our page that describes how the various compounds that fight halitosis work. Ingredients to look for.

Or our page describing how other products other than just mouthwash Mints, lozenges, gum, toothpaste. can be used as a delivery system for compounds shown to be effective against bad breath.