The smiles of people who clench and grind their teeth typically develop a characteristic look. It’s one where their teeth are worn flat across, as if they’ve been ground down using a file.

The pictures on this page provide examples of this wear pattern. Each comes from our group of virtual smile makeovers that features before-and-after picture sets illustrating (and explaining) how the damage caused by tooth grinding might be fixed.

When looking at the smile shown here, any dentist would quickly conclude that this person has a bruxing habit.

A classic look of someone who grinds their teeth.

View the full-size makeover animation for this case.

The word “brux” is the term that dentists use to refer to a patient’s habit of tooth clenching and grinding.

This activity may be something that they do: 1) Subconsciously during their waking hours, 2) While they sleep, or 3) Both.

To fully understand the type of damage that has taken place in the picture above, one needs to know what the teeth of a normal smile usually look like. 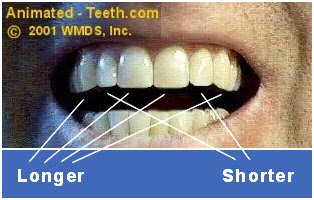 The look of a normal (non-worn) smile.

When looking at a person’s 6 upper front teeth:

b) The smiles of bruxers.

When teeth have been worn down from a habit of tooth clenching and grinding: 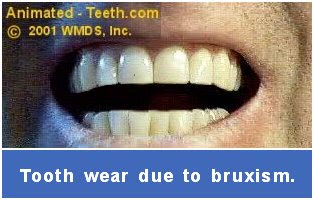 The even look of teeth worn down by bruxism.

FYI –This same general wear pattern tends to occur naturally as we age. And often by the time a person has reached their “senior” years it has become quite noticeable.

That’s why the smile of a bruxer looks aged. Restoring the person’s teeth back closer to their original shape returns “youthfulness” to their smile.

a) Restoring the relative lengths of the teeth.

The “after” picture for this makeover case (the “normal” picture above) shows how a dentist might rebuild this person’s teeth by way of placing dental crowns.

The goal would be to return the teeth to a similar length pattern as existed before. (Central incisors and canines about the same, with the lateral incisors just a little bit shorter.)

A compromise may be necessary.

The precise length that’s possible for the restored teeth may not be their original one. And, in fact, with most cases it probably won’t be. (Read the ‘takeaways’ box below for more details.)

However, the exact length that’s re-established for the teeth isn’t as important as the pattern that’s created. Recreating a “normal” pattern (like the one illustrated in our “normal” picture above) is what returns a smile to a more customary and youthful appearance.

FYI –As mentioned above, the length that’s possible for a person’s restored teeth may not be the same one that existed before their wear took place. The degree of change that’s possible will be dictated by their bite, as it is now at this point in their life.

While the damage caused by grinding is frequently most obvious on a person’s front teeth, it’s likely that their back teeth have worn down too (it just depends on the position their jaw is held in when they grind).

And while these changes (both front and back) have been slowly taking place, the person’s jaw joint will have gradually adapted to this new configuration too.

That means that when making a fix the dentist can only make changes for the front teeth to a degree that they:

All of this means that, while some degree of modification can be made, the teeth likely can’t be returned to the same (full) size they were before the damage took place. This would be especially true with cases where extreme amounts of wear have taken place.

When formulating a plan for fixing the damage caused by bruxism, the treating dentist will have concerns about which types of dental restorations might make a suitable choice for the repair.

A primary concern will be that the new restorations must be able to withstand extreme forces generated during episodes of clenching and grinding. (Even in cases where a person’s bruxism is “controlled,” a dentist must anticipate that at least some such episodes may continue.)

In a majority of cases, dental crowns will likely make the most durable, longest-lasting choice (as opposed to porcelain veneers or dental bonding).

Because of the great strength characteristics that they offer, porcelain-fused-to-metal dental crowns (PFM’s) are often utilized. They’re known for being durable and lasting restorations.

As a drawback, the ceramic surface of these crowns can be abrasive to teeth that bite against them.

As a solution, and as long as doing so doesn’t unduly compromise the restoration’s aesthetics, it may be possible for these tooth-contact surfaces to be metal (which is kinder to the opposing teeth).

The prudence of choosing all-ceramic crowns for a bruxer simply depends on the type of “porcelain” from which they’re made.

Some types of ceramics are fairly fragile and not capable of withstanding great forces. Others (like the compound zirconia) have substantial strength characteristics.

The trade-off encountered when using stronger types of ceramics is one of a greater risk of wear of the opposing teeth and a slightly less natural-looking appearance.

Gold crowns make one of the best choices for restoring bruxism cases.

Gold has a wear coefficient that’s similar to enamel, which means it won’t cause excessive damage to opposing teeth. And since it’s a metal, crowns made out of it are unlikely to fracture.

Of course, the big disadvantage of this type of restoration is its appearance. It can make an excellent choice for back teeth but few people want gold upfront.

Obviously, choosing the right type of crown is a complex issue and you’ll require the advice of your dentist.

Historically porcelain veneers have had the reputation of being brittle, thus making them a poor choice for applications where they are subjected to heavy clenching and grinding forces.

(This page provides background information about the differences between dental crowns and porcelain veneers and can give you an idea of when each is typically used. One primary advantage of veneers is that less tooth structure is trimmed away when they are placed.)

At this point in time, there are synthetic “porcelains” that can be used to fabricate veneers. And some of these materials are several times stronger than their predecessors. (Two brand names are IPS e.max® and BruxZir®.) However, one trade-off is that these materials aren’t as aesthetically pleasing (life-like, natural-looking) as traditional materials can be.

Since considering the placement of porcelain veneers for bruxers lies contrary to traditional conventional wisdom, be sure to quiz your dentist. Ask…

The bruxism must be controlled.

!! This is probably the most important section of this whole page.

It’s imperative for the patient to understand that whether or not they have repair work performed, if their teeth-grinding habit continues some type of dental damage will continue to occur.

The consequences of not controlling grinding activity.

As mentioned above, if a person’s grinding habit isn’t brought under control some type of ill effects will continue to occur.

The patient must understand that by choosing to proceed with the repair and restoration of their teeth they are only treating a symptom of their condition, not the condition itself. 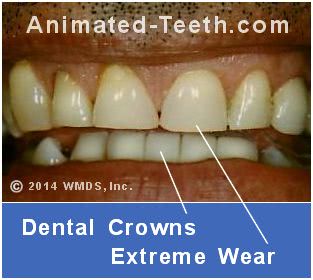 FYI –Any porcelain restoration whose surface has been ‘adjusted’ (trimmed on) and afterward isn’t properly polished or glazed can be quite abrasive to the teeth that bite against it. (Unfortunately, this situation isn’t terribly uncommon. Our picture above shows an example.)

The result can be one where the restorations placed to fix the damage caused by tooth grinding can actually cause more of it to occur, likely at a faster pace.

This is not only a concern for opposing natural teeth but also those supporting any type of dental work.

Even placing dental restorations that meet the highest standards can’t create a situation where your teeth and their supporting structures are immune to the effects of continued bruxism.

Tooth grinding is a harmful parafunctional habit that must either be controlled or at least minimized (typically by wearing a protective appliance).

The classic appearance of a person who grinds their teeth.

View the full-size makeover animation for this case.

Just as above, any dentist looking at this picture would immediately come to the conclusion that this person has a serious tooth-grinding habit.
It’s a simple equation: Prolonged periods of tooth-to-tooth contact = Tooth wear.

With this example, it looks like most of the upper front teeth have portions that have simply been ground off. (And, in effect, they have.)

You can actually see how the flat, worn biting edges of the lower teeth mirror the flat, worn surfaces of the upper teeth. (When this person does their grinding, it’s apparent that they hold their lower jaw just slightly to their left.)

FYI –The dark coloration of the upper left tooth is frequently a sign that it is either in need of or has already had root canal treatment.

This is a separate dental issue and not necessarily related to this person’s tooth grinding habit.

Other classic signs of tooth grinding.

Not all cases of bruxism involve a situation where all of the teeth have been worn down flat. 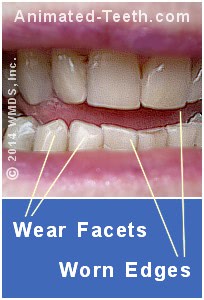 Depending upon the alignment of the person’s teeth, one or more of them may cause or receive the bulk of the damage.
As an example, picture “A” shows a case where: 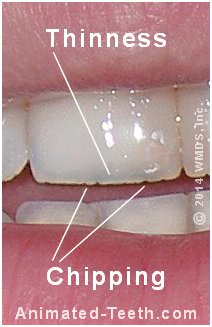 Another phenomenon that’s often seen with teeth that have worn down due to tooth grinding is chipping.
Enamel is a strong dental tissue but it’s also brittle. If it’s worn down to a very thin, sharp edge, tiny fragile bits of it will tend to chip off.
In cases where a large portion of the biting edge has been worn thin, larger sections of tooth structure may break away.

FYI –In picture “B”, the faint band of grey running across the biting edge of the upper tooth indicates that this area has worn fairly thin.

The grey color is due to the fact that much of the light that strikes this portion of the tooth passes right through it (it’s translucent).

In contrast, higher up where the tooth is thicker, light isn’t able to pass through but is instead reflected off and back out of the tooth. This gives it its expected white coloration.