It’s not uncommon that a person’s teeth will show the effects of wear over time. This digital smile makeover shows an example of this phenomenon.

As you look at this case’s “before” picture …

Notice how the two center upper teeth have lost their original rounded contours and are now straight across.

Also, notice how the upper left lateral incisor has worn down significantly, to the point of being noticeably short.

When teeth have worn like this, a smile loses “youthfulness.”

This type of wear is characteristic of people who brux their teeth. “Bruxing” is a term dentists use to refer to tooth clenching and grinding.

It’s common for people to brux during their waking hours (often in response to stress) and/or when they sleep. Finding a way for this patient to control the effects of their bruxism, most likely by way of wearing some type of mouthguard, would be an important aspect of any treatment that is provided for this patient. 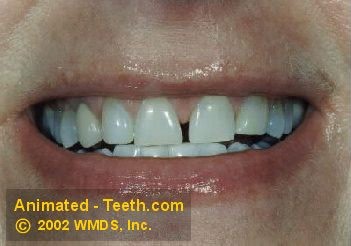 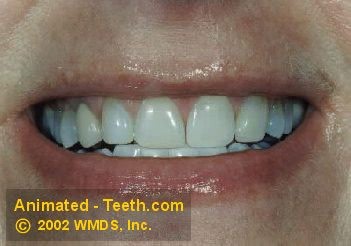 The changes we’ve illustrated in our “after” picture could be accomplished by placing dental crowns on the three teeth that have the greatest amount of wear.

Dental crowns (especially porcelain-fused-to-metal ones) are very strong restorations and would probably make an excellent choice for this case.

The idea would be to use the crowns to restore the length and contours of the teeth to proportions somewhat similar to those that existed before they wore down.

The “before” picture shows that this person has a gap between her center two teeth. Dentists use the term “diastema” to refer to this type of spacing.

Undoubtedly, this diastema has always existed (ever since the two teeth framing it initially came into place at around age six). Its presence is totally unrelated to the tooth wear that we discussed earlier.

From a dental aspect, it is of no consequence and does no harm.

In our “after” picture, we’ve illustrated how this person would look if each crown were made slightly oversized in width so the diastema is filled in.

Whether her diastema is closed, left open, or just partially closed is simply a matter of personal preference.