Replacement of a failed dental bridge with a new one. 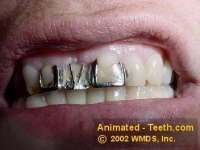 This digital smile makeover illustrates the replacement of a damaged dental bridge with a new one.

1) This person is missing his center right tooth (the right central incisor). At some point in time, it had been replaced by way of placing a porcelain/gold dental bridge.

The replacement tooth was likely all porcelain. When the bridge was seated over its supporting teeth (the “abutment” teeth), the bridge likely gave the appearance that these teeth were outlined with a border of gold.

2) As you can see in the “before” picture, the condition of the bridge has since deteriorated.

The porcelain has come off the replacement tooth. (What you see now is the metal framework that was originally covered over by the missing porcelain.)

The abutment teeth (the one’s originally outlined by gold) have sustained damage. Most notably, the central incisor seems to have some type of repair made by placing dental bonding.

3) The teeth that lie to either side of the bridge have problems too.

The tooth on the left side has a cavity in the area where it touches the damaged bridge.

The eyetooth that lies on the right side seems to have a chip out of its biting edge. 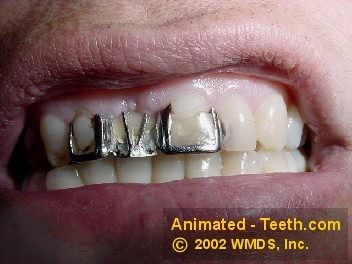 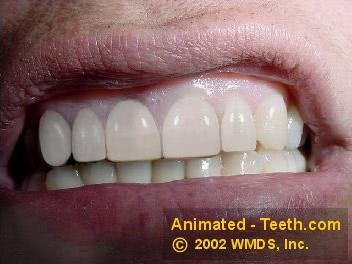 1) Replace the damaged bridge with a new one. –

Clearly this person’s bridge needs to be replaced. The only question is with what type.

Showing gold edging around teeth is fine if that’s your taste. But as an alternative, the bridge could just show porcelain (which is what we’ve demonstrated in our “after” picture.)

(We must admit that we’ve probably taken some liberties when creating our “after” illustration. It’s common that over time some jawbone recession will occur in the area of a missing tooth. If it has here, when a new bridge is placed the gum tissue may not fill in between the individual teeth as fully as we’ve shown.)

The needed repairs for the other two teeth, the decayed tooth and the eyetooth with the chip, could probably both be made by placing dental bonding (white fillings).

In our “after” picture, however, we’ve chosen to illustrate the repair of the chipped tooth with a dental crown. This way greater shape changes can be made.