Uses for tooth implants in a smile makeover. 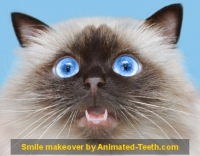 Sure, we were bored when we happened to run across this picture. But if Fluffy here was a human, this could be an example of a case where dental implants could be used, in various ways.

This poor kitten’s smile has a number of problems, when all combined, makes her look old beyond her 7 years.

On top, we really don’t think this kitty has any teeth at all.

On the bottom, it seems she’s missing her back teeth.

Her very long lower canines (eyeteeth) give her a wild, unruly look. 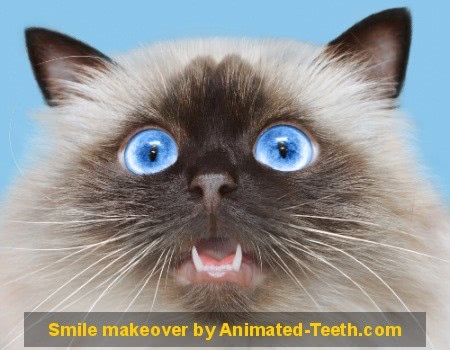 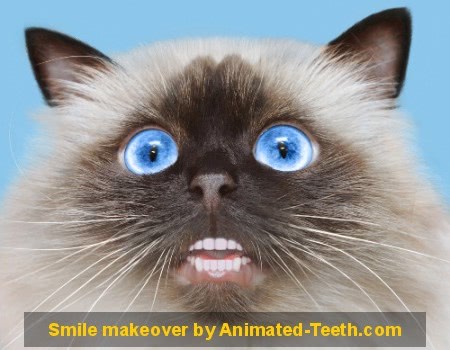 On the top, probably the most cost-effective solution for replacing teeth would be a complete upper denture. This could be a traditional one or else one supported (held in place) by dental implants.

In most cases (ones where adequate jawbone shape exists), a traditional denture should suffice. The advantage an implant supported one would be the stability of the appliance. Rather than being held in place by suction, the denture would be anchored to implants imbedded in the jaw bone.

Since no suction is need, the denture could have an open palate. That means that the roof of the patient’s mouth wouldn’t be covered with plastic. (A feature most patients appreciate.)

Only the treating dentist and patient, together, could choose between these two approaches. The cosmetic end result of either method, however, would be the same and very similar to what we show in this makeover’s “after” picture.