When you first look at this case’s “before” picture, you might think that this person has simply chipped a tooth.

On closer inspection, however, it can be determined that this damage has actually been caused by the tooth below. We know this because this person had the foresight to send in multiple pictures of her smile, one of which shows how her teeth align when they are fully closed.

From her pictures, we know the following:

The notch in the upper right central incisor is due to wear created by contact with the lower right one. (This person probably clenches her teeth.) For the most part, these two teeth bite edge-to-edge.

When her teeth are fully closed, this person’s upper left central incisor positions itself behind her lower teeth (the tooth is in crossbite). However, from her picture it’s hard to know if the comparative shortness of this tooth is due to wear, or the fact that her malocclusion has kept it from fully erupting.

In general, the crux of the problem here is that the lower incisors have a positioning that’s too far forward, although the degree of this misalignment is slight and fairly difficult to visualize. 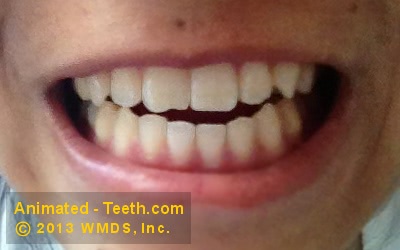 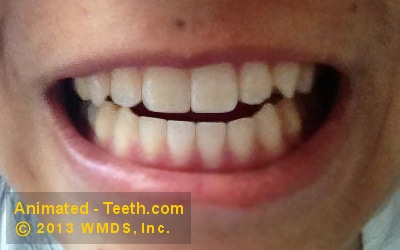 The type of wear that has taken place with this case will continue unless this person’s “bite” issues are resolved.

We’ll also state that without making some type of changes with her bite, it would be impossible to just place dental restoration to repair the damage that has occurred.

New restorations would interfere with the way her teeth come together. And they would be under such strain that they would ultimately either break, or break or wear opposing teeth.

Ideal treatment for this case would involve some type of orthodontic treatment. It might be “complete,” meaning the positioning all of her teeth, both upper and lower, is perfected. Or it might be some type of “partial” treatment, making just enough change that repairs can be made.

With this case, it might be possible that the treating dentist could use some type of removable orthodontic appliance(s), like Invisalign, to make relative minor changes with the alignment of the lower front teeth so the upper teeth could be fixed.

The graphic below illustrates how the sides of selected teeth are sometimes shaved, so they can be repositioned back a little into a narrower space. (For more details, see this page.)

Once this person’s “bite” issues have been dispensed with, restoring the upper teeth like we’ve shown in our “after” picture becomes quite straight forward. Porcelain veneers would likely make a good choice. As a less expensive, although possibly less durable option, dental bonding might suffice. This person’s dentist would have to make a recommendation.

In our “after” picture, the lower teeth look taller than they were initially. It would be expected that tipping these teeth backward into alignment could result in this type of change. Their worn biting edges could then be trimmed to give a more even alignment (like we’ve shown).

We’ll admit that the treatment plan above really is a bit involved. And in that light, this person could consider asking their dentist about the possibility of simply trimming their longer tooth slightly shorter, so to match it’s mate.

The initial look of this approach would probably be reasonable enough. Of course, the biggest problem is that it does nothing to address the issues that caused the wear in the first place (which will likely continue).

To help slow down the rate of any future wear, the treating dentist might make this person a mouth guard. These appliances are especially helpful for people who grind their teeth in their sleep.