This person submitted their picture for a makeover simulation, stating that they had had the white filling placed on their right central incisor about 10 years ago. As you can see in the “before” picture, the bonding has since deteriorated and stained.

The primary question on this person’s mind was what might make the best choice for repairing or replacing it. The possible options being dental bonding, veneer or crown.

They gave us a fair amount of information about their tooth:

As mentioned above, the filling was originally placed about 10 years ago.

They stated that about 1/2 of the tooth was broken off in an accident.

They also said that the tooth is alive (as in it hasn’t or doesn’t need root canal treatment).

Beyond their primary concern, there were some other issues we noticed with their smile.

We’re guessing that their other central incisor has some bonding placed on it too. It seems to have a notch right at the gum line. It’s surface seems less smooth than the other natural teeth.

The alignment of their teeth isn’t perfectly ideal. Although as we explain below, aspects of this work in this person’s favor.

Possibly there’s a color mismatch between the central incisors and the other teeth. Although, this might just be the way things look in this picture. 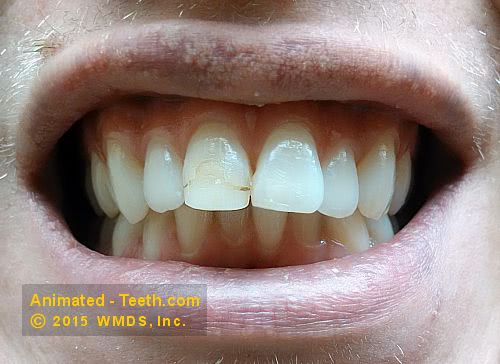 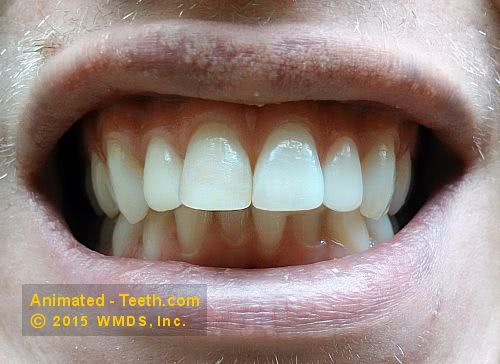 One thing we found interesting about this case is how long the existing filling lasted. It deteriorated and stained over the last 10 years. But evidently has never broken off or fallen out. It’s overall shape is still pretty reasonable.

One possible explanation for this may have to do with the alignment of the teeth. They display a bit of overjet (the upper teeth are a fair amount forward of the lower ones). This helps to minimize the amount pressure, as well as wear and tear, the upper central incisors are exposed to.

This person seems to have gotten reasonable service from of their original filling. So, if they felt their experience was satisfactory, the old bonding could be replaced with new.

Actually, at least in theory, all of the old bonding doesn’t even have to be removed. Just that portion that has deteriorated and needs renewing. New white filling material bonds perfectly well to old (existing).

The patient should expect the new filling to eventually deteriorate in a similar fashion as the original one. And need replacement at a similar interval.

b) Place a porcelain veneer.

Another alternative would be to create a porcelain surface for the tooth by way of placing a veneer. This would generally resist staining and deterioration better than the bonding did, and therefore tend to make a more permanent solution.

One awkwardness is that existing tooth bonding doesn’t make the best foundation (supporting structure) for veneers. But nowadays, some designs for veneers are much more encompassing than before (rebuild a greater portion of the tooth), so possibly a veneer could still be placed after the bonding was removed. Only the treating dentist could decide if placing one was appropriate.

The general advantage of placing a veneer (as opposed to a crown, our next suggestion) is that the tooth is trimmed less.

Another way to provide a porcelain surface for a tooth is to place a dental crown on it. And, for a tooth that is 1/2 broken, this is the traditional way a repair is made.

With this case however, it’s already been demonstrated that great strength (a hallmark characteristic of a dental crown) isn’t really needed. So, that’s where the issue of the suitability of a porcelain veneer (less strong) vs. crown (strongest) comes into question.

The primary disadvantage of placing a crown is that the tooth will need to be trimmed more extensively. There’s nothing wrong with doing that, it’s just that dentists generally try to preserve tooth structure rather than remove it.

Even the porcelain solutions discussed above will need to be replaced sooner or later, although, typically less frequently than dental bonding. Here’s general information about the longevity of crowns and veneers, as well as fee estimates.

In our “after” picture, we went ahead and illustrated other changes that might be made with this smile. Just to make it look more perfect.

We’ll leave it up to this person’s dentist to discuss with them what steps would be required to make them.