Improving the outcome of a case via the use of crown lengthening / gum sculpting.

The “before” picture for this virtual makeover is actually the “after” picture of a previous case we completed.

The first version of this makeover.

With that case, we illustrated how placing dental crowns on selected teeth could provide a somewhat passable substitute for having orthodontic treatment. But, as you can see when looking at the “before” picture here, the smile still has some noticeable problems. It seems to slant toward this person’s left.

The angled look of this smile is simply due to the fact that the gum line on each of the front teeth lies at a different level. On the right side it’s up way high (to the point that it really can’t be seen). And then on the the other side (the left central and lateral incisors), much less tooth length shows. Here’s why.

The left central incisor – In the original makeover, we illustrated placing a dental crown on this tooth. But in terms of appearance, this case gives an example of one prime awkwardness that often exists when one is placed.

Crowns give the dentist a large amount of control over the general shape of the tooth. But they don’t offer a way to make changes with the configuration of the tooth’s gum line. To do that, a separate procedure, termed “crown lengthening,” is needed (see below for an explanation).

The left lateral incisor – We didn’t illustrate any changes for this tooth in the original makeover. So, once again, if any change is made with the gum line, an additional procedure must be performed. In this type of situation, it’s referred to as “gum sculpting” (see below for an explanation). 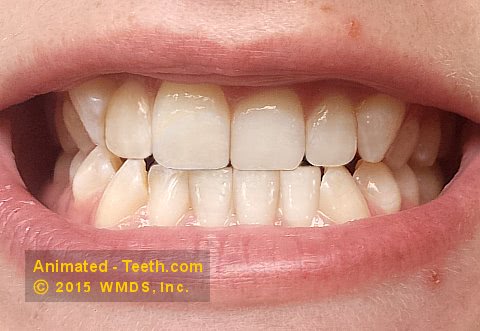 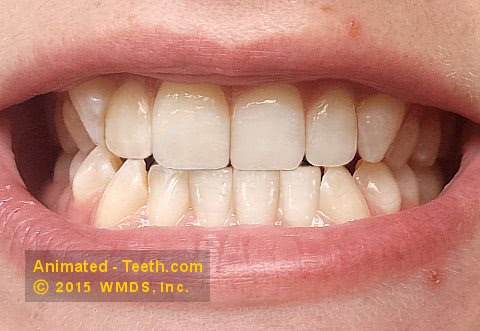 Our “after” picture shows how this case could be improved if before placing the new dental work, a minor surgical procedure was used to even out the gum line first.

Details about the gum work.

The procedure for both teeth would be performed as one surgery. The surgery itself could be expected to be on the same order as having a tooth extracted. Just local anesthetic (dental “shots”) would be needed. Some stitches would be placed afterward.

After the procedure had been completed, a healing time frame on the order of 6 weeks would be needed before the impression for the new dental work should be taken.