This smile makeover simulation involves a case where the person reports that their two center upper teeth were broken in an accident at around age 10.

Beyond just seeing how their teeth might be rebuilt and improved, they also wanted us to show how they might look if they were whiter.

This person’s upper right front tooth was one of those broken. Evidently it has had root canal treatment, and then a crown placed.

The upper left central incisor was apparently broken at the same time, however not as extensively. As a repair, dental bonding was placed.

As compared to a dental crown, a repair made using bonding typically won’t last as long (which seems to be the case here). And characteristically it will tend to pick up staining, which would explain the color mismatch that’s evident in this “before” picture.

It could be stated that this person’s upper lateral incisors are a little bit shorter than ideal. Although, deciding to make a change with them would simply depend on personal preference.

As stated above, this person feels that the color of their teeth is too dark. Once again, that’s simply a point of personal preference. 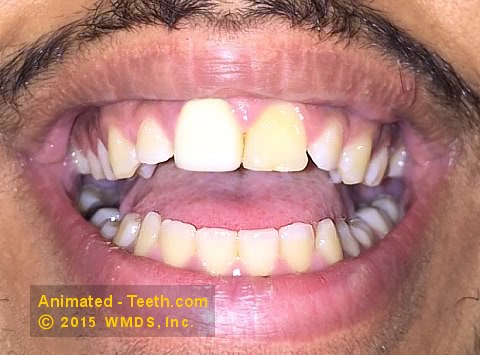 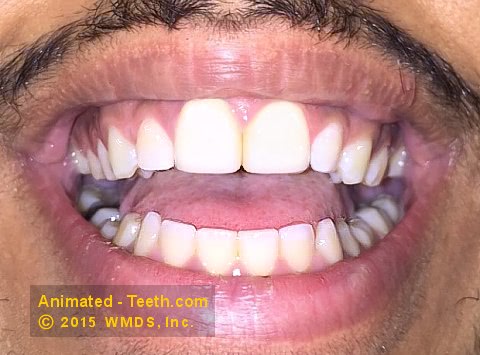 Our “after” picture simulates how this person might look after having dental crowns placed on their upper center two teeth.

a) The upper right central incisor.

The quality of this case’s “before” picture leaves some to be desired. In it, this tooth looks quite bright and out of place. If that’s an accurate representation, then the only way to make a correction would be to replace the crown. If not and its appearance is acceptable, then a new one isn’t needed.

(Our “after” picture, however, illustrates replacing it with a slightly less bright and longer one.)

b) The upper left central incisor.

Our simulation illustrates placing a dental crown on this tooth.

One point that should be noticed is the shape of its gum line. As you can see, it’s not a mirror image of the gums on the same tooth on the other side.

Crown placement can make substantial changes with a tooth’s size and shape. But making changes with its gum line is a separate issue. If the discrepancy shown in our “after” picture is an important issue to this person, they must discuss this matter with their dentist before their work is begun. Here’s an example of how this situation can be addressed.

Our makeover simulation shows how lengthening this person’s upper lateral incisors helps to create a more uniform look. Either crown placement or porcelain veneers might be used to make this change. It’s the treating dentist who would need to decide which of the two makes the better choice.

We’ve illustrated how this person would look with a whiter smile. If this look appeals to them, then their teeth need to be whitened before any of the work discussed above is begun. Depending on the method used (at-home vs. in-office), this may involve some weeks of treatment. Once again, this is a matter that needs to be discussed with their dentist.

We’ve illustrated how the lower front teeth might look if whitened, and their biting edges buffed down so to make them more even.