It seems ever increasing that our virtual smile makeovers involve simulating the outcome of orthodontic treatment. With this case, it’s the use of braces to resolve severe crowding of both the patient’s upper and lower teeth.

When looking at this case’s “before” picture, it’s easy enough to imagine what the underlying problem is.

The collective width of this person’s teeth is substantially wider than the amount of jawbone space that’s available. As a result, as some of the teeth have come in they’ve had to do so way forward (upper lateral incisors) or backward (upper and lower eyeteeth) from their expected (normal) location.

Another issue that’s noticeable in this “before” picture is one of tooth size.

With most smiles, the person’s upper central incisors (upper center teeth) are both wider and longer than their neighboring lateral incisors. With this smile, it seems both types of teeth are the same length.

While we only have a picture to examine, we’d anticipate that the crown portion (the enamel-covered part of teeth that typically lies above the gum line) of these centrals is substantially larger (longer) than what it seems. It’s as if the teeth have not been able to fully erupt out of the gums. 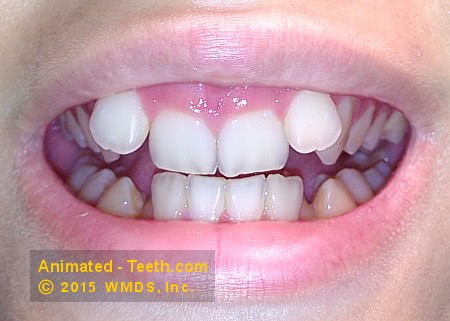 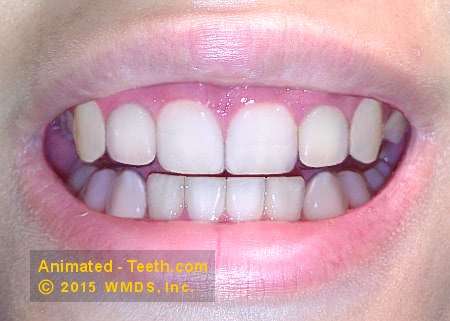 Our “after” picture is our attempt at showing the type of changes that having orthodontic treatment could make.

In a nutshell, what the treating orthodontist must do is find enough jaw space that they are able to realign the teeth. They’ll likely have several plans of attack in accomplishing this goal.

a) The gum line issue.

As mentioned above, we anticipate that this person’s upper central incisors are larger than they appear in the “before” image. Our “after” picture suggests the size we think they actually are.

It’s not uncommon that the act of moving teeth tends to resolve gum issues such as these. If not, and if it is a concern, “gum sculpting” can be performed. Either way, this is simply a topic that needs to be discussed with the treating dentist.

b) Straightening off the edges of the teeth.

When teeth are crooked, it’s not uncommon that the edges of some of them don’t get worn down straight the way they naturally would. And then others get worn more so than normal.

It’s very common that a dentist will straighten off irregular edges of teeth by buffing them slightly with a dental drill. That’s the look we’ve tried to simulate in our “after” picture.

c) What orthodontic method should be used?

A decision about what type of orthodontic system should be used to treat this case can only be made by this person and their orthodontist. Having said that, removable aligner systems often have difficulty treating complex cases (like this one). For that reason, some type of traditional (wire and brackets) system would probably make the most predictable choice.