When this person submitted photos for consideration for a smile makeover simulation, they explained that they had already sought opinions about their situation from their dentist and an orthodontist.

And of the options that had been discussed, the treatment plan that they were most curious about was one where:

The small single upper front tooth (the right lateral incisor) would be extracted.

Next some degree of orthodontic work would be performed so to improve the alignment of both the upper and lower teeth.

And then additionally for the upper teeth, place dental crowns on them that help to mask the fact that both the right and left lateral incisors are missing.

Much of what can be said about the difficulties of this case are fairly self-evident in the “before” picture. There are however, two factors we will point out.

a) Can a normal-looking result be created?

One of the biggest problems with this case is that of the missing lateral incisors.

Each of a person’s six front teeth have a characteristic size and shape in relation to each other. And when that configuration is not present, even if a smile looks uniform, it may not look entirely “right.”

Something that will tend to help out with the above difficulty is that this person seems to have a low lip line. From the look of their grimace in the picture, it seems as though this person’s upper lip covers over a large percentage of their upper teeth. If so, that will help to mask any irregularities that actually exist. 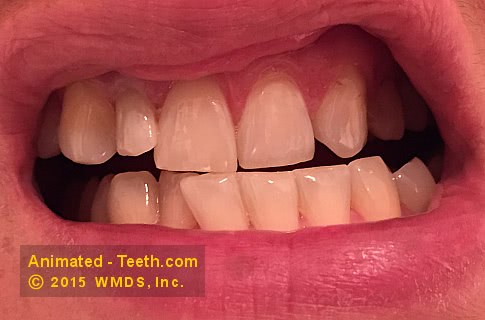 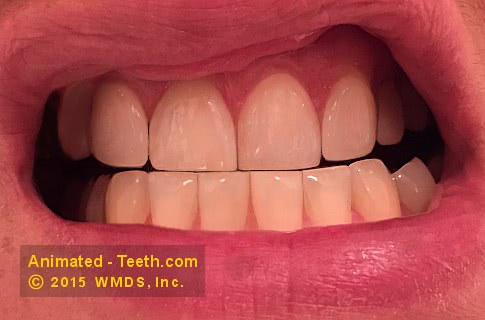 Our “after” picture illustrates our interpretation of the treatment plan being considered. However, creating a simulation like this clearly does have its limitations.

Smile uniformity is the goal.

As we explained above, with front teeth missing, the goal of this person’s treatment can’t be creating the “perfect” smile. The plan must instead be one of creating a harmonious, symmetrical-looking end result that to most people will pass as perfect. Toward that goal, here’s what we’ve illustrated.

a) The bottom teeth.

In their email, this person made mention of plans for their lower teeth. It consisted of removing one lower incisor and then making use of that space to realign the remaining teeth.

That approach is sometimes used. The disadvantage is one where on close inspection the irregularity of having only three incisors might be noticed. However, this approach does fall in line with a plan above of creating uniformity rather than perfect normality.

Actually, we first attempted to simulate that outcome but it didn’t work out for us. Once again, we were unsure of how much tooth movement would actually be performed. Also, trying to simulate some types of changes within an existing photo can present problems.

Instead, we illustrated how each of the four incisors might be “stripped” (narrowed) and then realigned. And yes, we know the midline is way off. We would expect that in real life it could be centered up with the upper teeth.

b) The upper teeth.

With the upper teeth we made the assumption that even with some tooth realignment, due to the missing two lateral incisors there will still be some extra space on the upper arch that needs to be filled in.

With that in mind, we’ve illustrated the placement of dental crowns: