Improving a smile that has a mesiodens (supernumerary tooth). 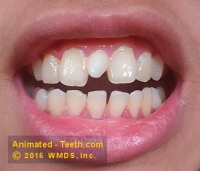 This digital smile makeover features a case where the person has an extra upper tooth.

Extra teeth in general are termed “supernumerary” teeth. When the extra tooth lies between a person’s center teeth (the upper ones in this case, which is the most common situation) it’s referred to as a “mesiodens.”

Having a supernumerary tooth is relatively rare (less than 4% of the general population has one). Having a mesiodens is even rarer (less than 2% of people have them). And only about 25% of them erupt (come through the gums), which is the case we have here.

[This page gives more background information about having a medsiodens.]

The fact that this person’s extra tooth has erupted creates an obvious cosmetic dilemma.

Even if the tooth hadn’t come through the gums its still would have most likely kept the upper central incisors (the teeth on each side) from aligning properly. They probably would have had a sizable gap between them.

The bottom teeth have some alignment issues too. Also, the biting edges of some of them have chipped or worn. 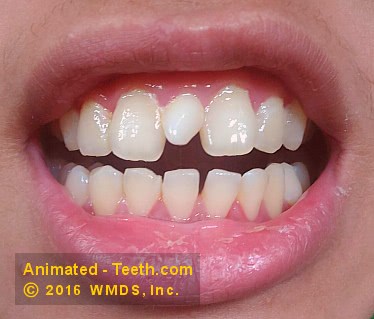 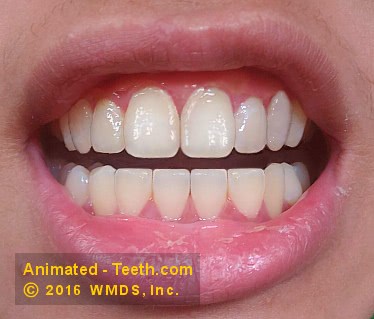 When we look at a person, we expect to see a smile that is bilaterally symmetrical, meaning it’s left and right sides are mirror images of each other.

With this case, creating that symmetry won’t be possible unless the mesiodens (extra tooth) is extracted.

Here’s the usual way this type of case would be treated:

The wear and chipping that’s evident on the lower teeth could be resolved by placing tooth bonding (white fillings).