– How likely is it that you’ll have trouble speaking? How long will the difficulty persist?- Statistics from research. | How to overcome the problems you encounter.

A) How likely is Invisalign® to interfere with speaking?

Wearing any type of dental appliance has the potential to affect the way that a person speaks. In most cases this has to do with the extra amount of thickness the appliance adds to the roof of their mouth (the anterior palate), or the backside of their upper front teeth.

In comparison to other types of dental appliances, removable orthodontic aligners are made out of very thin plastic that only covers over tooth surfaces, and they fit very snugly on the teeth.

Due to these characteristics, very little actual thickness is added. And for that reason, most people don’t encounter any significant speech problems when wearing their aligners. Admittedly however, for those that do it can be one of the tip-offs that they are wearing invisible braces. Additional signs.

Probably everyone notices at least some difference or awkwardness in the way they talk when they put in their first set of aligners for the first time.

More about the Invisalign® experience.

A study by Nedwed polled Invisalign® patients and determined that 93% of them experienced no speech impairment during the first 3 to 6 months of their treatment.
(This period, the initial portion of a patient’s treatment, is when speech problems would be expected to be most noticeable.)

This finding does imply that 7% did have some level of difficulty, which isn’t necessarily a small percentage.

b) How long will the speech difficulties persist?

Probably for most people, the issue that’s most important to them is if they do experience problems talking, how long will they last?

As an answer, Nedwed reported that 46% of Invisalign® patients had no lasting difficulty with speaking.

Extrapolating from the two findings we’ve reported from this same study, it seems that possibly 3% or so of all Invisalign® patients will experience a persistent speech impairment associated with wearing their aligners.

B) How to cure Invisalign® speech problems.

If you do detect a change in the way you speak when you wear your aligners, the question then becomes one of how quickly can you adapt to and overcome it before anyone else notices. 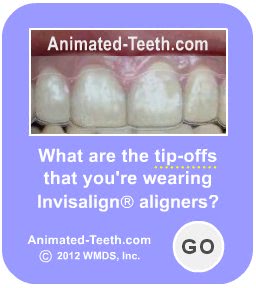 A change in the way you speak can be a tip-off that you’re wearing Invisalign®.

a) In most cases the problem will resolve quickly.

The Nedwed study mentioned above found that in those cases where some type of speech impediment was noticed, the person typically adapted quickly. Their ability to talk normally returned within a short period of time, usually no longer than just a few days.
It’s even possible for a person’s adaptation to take as little as just a few hours.

b) The remedy for an Invisalign® lisp is practice.

The solution for overcoming aligner speech problems is to simply practice your enunciation of words. And of course, especially those that you have the most difficulty with.

That means you just need to do a lot of rehearsing. And the more that you do, the quicker you’ll adapt.

For example, read aloud to yourself. Or have extended conversations with a sympathetic friend. After doing so, and hopefully before you know it, the way you talk will have returned to normal.

c) You may feel that your lisp is still there.

Per the Nedwed study mentioned above, some relatively small percentage of patients will probably experience persistent speech problems. And if that’s the case for you, keep in mind that for very special occasions (like a talk, speech or toast) you do have the option that you can just take your aligners out.

Don’t overlook that what you think is especially horrendous may not really be all that noticeable at all. Our perception of things isn’t always accurate. So, ask a friend that you trust about the way you talk when your aligners are in place, and believe them if they say everything sounds fine.

d) Switching to a new set of aligners shouldn’t pose a problem.

Since each Invisalign® aligner is so similar in shape and thickness to the one worn immediately before it, the new one’s potential to trigger speech problems should be essentially nonexistent.

The exception might be the point when Invisalign® attachments Details. | Pictures. are first utilized with your case (they’re not always required). These lumps of dental composite (white filling material) are placed so to help your aligners direct their forces more effectively.

The usual application is one where the attachments are placed on the side of your teeth that show (their facial/buccal surface). And if that’s the situation with your case, any effect that they have on the way that you speak should just be minor and transient.

Our affiliate links can be used to shop  Invisalign accessories  on  Amazon.com  or  Walmart.com

Innovative devices and solutions for the issues Invisalign® wearers encounter.