Factors and situations that make it more likely that you’ll get a dry socket. | Blood clot loss. | A previous history of dry sockets. | Difficult or surgical extractions.

This page explains various factors that can play a role in increasing your risk of developing alveolar osteitis (a dry socket). Issues discussed are:

a) Not following your dentist’s postoperative instructions –

Possible consequences of failing to do so include dislodging the blood clot that’s formed in your tooth’s socket. Or inadvisably participating in activities or habits that may otherwise lead to its demise.

b) Having a history of previously experiencing dry sockets –

Understanding why you’ve been at risk before may help you to avoid this complication with future extractions.

c) Having undergone a difficult or surgical extraction –

Studies indicate that the higher the level of tissue trauma created during the extraction process, the greater the chances of dry socket formation. And while this may seem a risk factor beyond your control, we explain why it isn’t entirely.

(Our second page of this series discusses details about why smoking, birth control pills, age and tooth location Jump to page. are also contributing factors for alveolar osteitis.)

What’s to be gained by knowing about risk factors?

A) Not following your dentist’s post-op instructions.

The blood clot that forms in your tooth’s socket following its removal plays an important role in the healing process to come, with its loss (complete or partial) being a major causative factor in the formation of dry sockets. Here’s why.

As a preventive measure, many of the items listed as do’s and don’ts in your dentist’s post-extraction instructions have to do with limiting activities and behaviors that may be detrimental to this goal. Here’s an example of some of the issues frequently addressed:

1) The rolled or folded up gauze is placed directly over the extraction site.

2) Enough gauze is placed that when the patient closes they apply firm pressure to it.

Dentists typically advise their patients that after having a tooth pulled they should …
Doing so will help to ensure that a proper blood clot has a chance to form in their tooth’s empty socket.

2) Protecting the clot from physical loss.

Once a clot has formed, a patient must be careful not to disrupt it. In aiding with this goal, during the first 24 hours after their surgery they should …

Each of the factors above could place the blood clot at an increased risk of being dislodged and physically lost, and for that reason should be avoided.

How much of an issue is patient clot disruption?

Unlike other dry socket risk factors we discuss on our pages, there isn’t much scientific literature that supports the theory that patient activity resulting in the loss of the clot is a major contributory factor to dry socket formation.

In response, we will state that …

Don’t forget, your dentist’s instructions include other directions too.

Beyond the abbreviated do’s and don’ts we’ve outlined above related to controlling bleeding and blood clot protection, your dentist should also provide you with a comprehensive list of additional postoperative directions.

They should include instructions for both the first 24 hours, and then the days beyond. As an example of what they will include, we begin our discussion of common post-extraction instructions here. See the list.

Note: A separate risk factor covered in post-op instructions that you control (and therefore can be used as a preventive measure) is smoking avoidance. Why it’s important.

B) Having a previous history of experiencing dry sockets.

If you’ve had one before, you must consider yourself at elevated risk for developing a dry socket with other extractions.

A study by Reekie (2006) followed 302 patients who had routine extractions performed by general dentists. 16 of these subjects had a history of experiencing a dry socket before.

The unanswered question with the above study would simply be whether the major risk issues involved were primarily patient-related (systemic/medical issues, at-risk behaviors) and therefore likely to continue to exist. Or more so factors associated with the procedure itself (initial conditions, the way in which the procedure was performed, etc…) which might vary between surgeries.

Either way, as a patient, the factors you control the most are those associated with your dentist’s list of postoperative instructions. So especially when a previous history of experiencing dry sockets exists, strictly adhering to proper post-extraction protocol should always be considered of paramount importance and your best chance of lowering your risks.

Studies have generally confirmed that surgical trauma/difficulty of surgery plays a primary role in the risk of developing alveolar osteitis.

Why the greater risk?

Several theories have been suggested as an explanation of this relationship. They include:

Will your dentist know what level of surgical trauma will be involved?

Yes, they should have some relative expectations. And in fact, developing an opinion is an important part of their planning your extraction. That’s because their ability to correctly interpret the challenge that a tooth will pose beforehand will influence the way its removal is initially approached.

For example, attempting to remove a tooth conventionally when a surgical approach is really needed only serves to increase the level of trauma associated with the procedure, and thus the patient’s potential for developing a dry socket.

Examples of the level of surgical trauma that an extraction might pose.

A correlation exists between extraction difficulty and risk of dry socket formation. 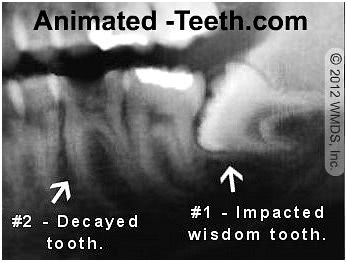 Both of these extractions offer challenges due to the tooth’s condition or positioning.

Example #1 – Some impacted wisdom teeth (like tooth #1 in our picture) are substantially encased in bone. And with this type of situation the dentist will need to:

Of these steps, creating the tissue flap and trimming bone are events that create a higher level of surgical trauma than that associated with routine extractions.

And because of their need, this surgical site can be expected to be at a relatively greater risk for developing a dry socket.

Example #2 – In comparison, when the decayed tooth (tooth #2 in our picture) is removed, there’s a good chance that far less tissue manipulation will be required. The dentist already has direct access to the tooth, so it’s likely that no gum or bone trimming will be required.

That means when compared to our first example, extracting this second tooth should result in less surgical trauma. And that means that the patient’s risk for dry socket formation in this location would be expected to be less too.

Example #3 – For this example, we’ll continue our discussion about removing tooth #2 in the picture above, and how an unexpected traumatic extraction might come about.

The scenario might be one where the extent of the decay is greater than anticipated. And as a result, the tooth breaks, leaving behind a root fragment that simply can’t be retrieved conventionally.

What will be needed is some type of surgical intervention, in the sense that now some bone will need to be removed (so the broken portion can be accessed), and maybe even a flap laid (to aid with accessing and removing bone).

If that’s what’s needed, fine. But the question at hand would be, did the two-phase procedure (failed and then successful attempts at removal) collectively create more procedure trauma, and therefore create a greater risk of dry socket formation, than if a surgical extraction was performed at the start? (This is an issue we’ll continue discussing below.)

As a patient, you might think that there’s little you can do to reduce the levels of difficulty of an extraction. On the contrary however, there’s a great deal you can do. It’s referred to as patient cooperation.

Make it your goal to be as good of a patient for your dentist as possible so they can focus their attention on performing their tasks, rather than managing you.

That difference might mean that they can remove a difficult tooth comparatively less traumatically. And as a result, help to set the conditions where it is less likely that you’ll have a dry socket.

b) Operator experience is important.

This risk factor is why we included Example #3 above (the situation where what was thought would be a simple extraction turned into a surgical one). We were trying to point out how having a less-experienced/less-skilled dentist remove your tooth may place you at greater risk of having a dry socket.

This phenomenon is generally considered confirmed by research (Kolokythas, Cardoso) [linked above]. As an example:

Choosing between a dentist vs. an oral surgeon.

In general, this risk factor means that you should ask your dentist questions. It’s their obligation to be forthright with you about their ability to perform a procedure in a fashion that reasonably approaches the level of skill and competence as other practitioners in your area, including specialists. If they can’t, a referral might be indicated.

Our next page discusses additional risk factors and prevention methods. ►

Kolokythas A, et al. Alveolar Osteitis: A Comprehensive Review of Concepts and Controversies

Noroozi AR, et al. Modern concepts in understanding and management of the “dry socket” syndrome: comprehensive review of the literature.

Torres-Largares D, et al. Update on dry socket: a review of the literature.