– What are they? / How do you use them? / Advantages and Disadvantages / Effectiveness / Common side effects. / Safety concerns.

The technique itself utilizes the same types of peroxide compounds as other at-home systems. What makes it different is simply the method by which the bleaching agent is delivered to the surface of the teeth being treated.

The whitener delivery system, or really the lack of one, is what makes this technique unique.

For any type of tooth-whitening process to be effective, the bleaching agent must remain in contact with the surface of the teeth being treated. With some methods, this contact is facilitated by the use of bleaching trays or plastic strips.

In the case of brush-on products, no treatment device is involved. Instead:

As we outline below, the simplistic nature of this technique has a big impact on both its effectiveness and the applications it’s best suited for.

2) How are whitening pens used? How long is the whitener left on your teeth?

It’s easy enough to provide you with general answers to these questions. But specific details will vary with each individual product, so be sure to read your instructions for the best results.

This technique offers some unique features that other at-home systems can’t easily match. 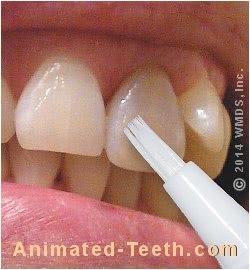 An advantage of using a pen is that the whitener can be applied to individually darkened teeth.

a) It can be used to whiten individual teeth.

Some people may have a situation where they only need to lighten one, or just a few, teeth.
Different from other at-home methods, brush-on technique is easy to use in this fashion. It’s a simple matter to limit the application of the bleaching gel to just selected teeth.
That’s not to say that using this type of product will be especially effective (we have much more to say about that below). But with diligence, a person may be able to get satisfactory results, or at least make some degree of improvement, for the tooth that needs it.

b) It’s a “trayless” technique.

For some people, the distinct advantage of using this method over other at-home systems is the simple fact that it doesn’t require the use of any type of delivery appliance, such as a bleaching tray or plastic strip.

For example, having to use these items can be cumbersome, hard to keep in place, a cause of gum irritation, or trigger excessive salivation.

And for all of these reasons, just using a whitening pen may offer the opportunity for a person to perform treatments whereas otherwise they would not.

As compared to tray-based or whitening-strip systems, direct application products are usually the least expensive way to get introduced to at-home whitening.

While you may not be able to achieve the same level of results as with other methods (see below), the results you do get may motivate you to investigate and pursue other options.

a) The film is easily dislodged.

A basic criticism of brush-on products is that they may wash away or get rubbed off fairly easily, possibly before they’ve been in place long enough to create much of a whitening effect.

Whitening teeth with peroxide compounds is a simple case of cause and effect. To achieve tooth lightening, the whitener must be in contact with the tooth’s surface for an effective amount of time.

If it’s not, the whitening results will either be minimal, uneven or take an extended number of treatments to achieve.

This method as compared to other at-home systems.

With other types of at-home products (strips, trays), the delivery apparatus that’s involved:

As opposed to these methods, a system where the bleaching agent is just applied directly does not afford the same degree of protection for it. And this fact tends to inhibit its effectiveness (discussed below).

b) The whitener can be difficult to place properly.

Another criticism of having to use a pen or brush applicator when performing treatments is ease of use.

The actual act of applying the whitener, while seemingly easy, can instead be awkward. Ensuring full coverage over the entire surface of each tooth (including portions you can’t see but others can) can be more of a challenge than you might expect.

(Note: This section compares the effectiveness of using pens to other whitening methods. If you’re looking for general information about when the process of teeth whitening will work (any method), use this page: Types of tooth staining and their treatment solutions.)

A publication by Strassler (2006) reviewed the findings of studies that had evaluated the comparative effectiveness of paint-on tooth whiteners.

As listed below, it didn’t have a lot of positive things to report for this technique.

a) Vs. whitening toothpaste.

A comparison of a brush-on product and a whitening toothpaste were found to produce the same (minimal) lightening effect.

b) Vs. tray-based teeth whitening.

Our conclusions about effectiveness.

There can be features of brush-on or whitening pen technique that may seem to make it a reasonable choice for you. And if so, it may be able to deliver a level of results that you find acceptable.

But in terms of creating dramatic results or treating stubborn types of staining, a tray-based system, whitening strips or treatments in your dentist’s office make the more effective choice.

Note –The way these types of products are applied pretty much explains why they have difficulty creating results on par with other types of systems. They have no protective device (tray or strip) that acts as a protective barrier that helps to keep the whitener from:

As solutions for these shortcomings:

Due to these issues, this technique has difficulty creating the same level of effectiveness as competing methods.

As mentioned above, most paint or pen products are founded on standard peroxide-based tooth bleaching. And that means that the types of side effects that one can expect are the same as typically experienced with other at-home methods.

The most common ones are gum irritation and tooth sensitivity. For most people, however, these are only mild in nature and do not require attention from a dental professional.

We discuss common side effects of peroxide-based whiteners and methods that can be used to manage them on this page.

7) What type of whitener is used?

Peroxide-based pen and brush-on products are typically formulated with one of the following compounds.

Colgate’s Simply White was the first brush-on product brought to the marketplace (2002). And as any dentist might guess, it was formulated with carbamide peroxide (at a concentration of 18%, which is equivalent to 6.3% hydrogen peroxide).

The reason this might be expected is because this compound has been utilized the most with tray-based systems (the technique that ultimately led to the explosion of over-the-counter at-home products you see in stores today).

No doubt Colgate was influenced by the abundance of research documenting its effectiveness and safety.

It’s our impression that current products tend to lean toward the use of hydrogen peroxide. Examples include:

Confirming the exact formulation of a company’s product isn’t always possible. It’s our impression that a hydrogen peroxide concentration between 6 and 9% is common.

FYI –We’ve become aware of a pen product that dispenses a high-concentration carbamide peroxide formula (over 40%) whose hydrogen peroxide equivalent would be on the order of around 15%.

The use of this type of high-concentration product would give us some concerns. Here’s why:

Due to these concerns, it seems to us that to get better whitening results the best solution would be to change to a more effective technique (see above), not to choose a more concentrated pen product.

8) Are whitening pen and brush-on whiteners harmful to teeth or dental work?

Since most direct application products create their bleaching effect via the use of peroxide-based whiteners, we’ll refer you to our safety information page that discusses this issue in detail.

As a point of reference:

We did find two studies that specifically evaluated the effect of brush-on products on teeth and dental restorations.

b) A major issue about existing dental work.

Possibly the most important thing to know about peroxide whiteners and their effect on dental work is that while a person’s teeth can be expected to lighten, the dental restorations on them generally will not.

This non-whitening effect means that after the bleaching process has been completed existing dental work will need to be replaced, so to match the new color of the person’s teeth. Depending on the specifics of the situation, this might require a considerable amount of treatment time and expense.

For this reason, it’s always a good idea to have your dentist check your situation out and advise you of any concerns before you initiate any type of whitening treatments.

Do you need to maintain a “white” diet during your treatment process?

It’s well documented that chromogenic agents, like cola, coffee, tea, and red wine, tend to cause tooth discoloration over time. However, research hasn’t shown that an exposure to these agents during the period when performing your whitening treatments (days, weeks) will diminish the outcome you get.

We explain on this page: Is it necessary to maintain a “white” diet during your course of whitening treatments?