Can you recement your porcelain veneer back on with super glue?

Porcelain veneer emergencies will always happen. And, in fact, we have an entire page that explains the kinds of things that can go wrong with veneers and why, and another that explains what options dentists can offer for fixing damaged veneers.

But beyond those general types of issues, from time to time we’re asked specifically if it’s OK for a person to recement their porcelain veneer that came off back on their tooth with super glue (cyanoacrylate, Krazy Glue®). This page address the various issues associated with that subject.

Using super glue to put your veneer back on is a bad idea.

The basic goal of this page is to try to convince you that reattaching a lost veneer with super glue makes a poor choice. And while that notion may not surprise you entirely, the primary reasons we give to support that stance are probably different than the ones you may have expected.

What we were expecting to find …

When doing the research for this page, we thought that it would be a simple matter to search through dental literature and find sources that stated that using super glue directly on tooth surfaces harms them. On the contrary, however, we didn’t (we discuss this issue below).

So, we’re not making the case against using cyanoacrylate products to reattach a lost veneer based on that argument.

Where the larger concern seems to lie …

Instead, and as outlined on this page, in almost all cases a do-it-yourself job is almost certainly going to be deficient in several ways, due to both the DIY nature of your work and the properties of the material used (the cyanoacrylate).

And that means, despite having accomplished what you think looks like a great job, in reality, and unknown to you, it will have some serious shortcomings.

Here’s an explanation of those points …

1) The presence of voids under the veneer.

One of the biggest concerns with a do-it-yourself job is that when you recement the veneer, the super glue won’t fully fill in 100% of the space between your tooth and restoration.

Besides not being cemented as securely as it could be, if a void exists, several other potentially serious problems can occur.

a) Bacteria will find a home.

If an accessible nook or cranny exists in the mouth, like a minute void that opens at the edge of a porcelain veneer, it will be colonized by bacteria.

And since the space cannot be cleansed (which would be the case with this type of situation), that persistent accumulation of plaque will place the tooth and its associated gum tissue at increased risk for the formation of tooth decay and gum disease.

b) Voids may affect the appearance of your veneer.

Background – The color of a veneer, especially a porcelain one that’s been designed with a lot of translucency (an important feature in helping it to look lifelike), is heavily influenced by the color of the cement that’s used to bond it into place.

The internal surface of a debonded veneer. 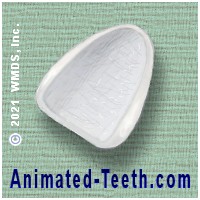 Notice the consistent (no voids) layering of the previous cement (bonding).

How does a dentist prevent voids?

When bonding a veneer on, a dentist first overfills its inside surface with cement. And then, as they press it into place on its tooth, the excess expresses out, thus ensuring that no voids form.

Can’t you use this same method with super glue?

You could, and doing so would help to prevent voids from forming. But with a do-it-yourself approach, doing so poses another set of problems. We discuss them next.

2) What happens if excess super glue is left around the edges of a veneer?

Background – When a dentist bonds a veneer into place, they always use an excess of cement (so to prevent void formation). And then, in all cases, they trim away any extra that expressed out. (See animation below.)

That’s a cardinal rule because any hardened excess that remains will interfere with being able to cleanse the tooth properly (especially flossing), which of course can lead to an increased risk for tooth decay and gum disease.

How a dentist trims cement.

The excess cement that expresses out is cured and then trimmed.

How does a dentist remove excess cement from around a veneer?

Excess cement is usually removed via a combination of scraping (using hand tools, like those that might be used to clean tartar off your teeth) and/or trimming it away with a dental drill.

Couldn’t you do the same with excess super glue?

Well, it’s pretty unlikely that someone doing dentistry at-home on their own will have a dental drill to use.
But granted, someone might have acquired a dental tool or two somewhere along the line that might be used. Of course, access and visibility would be issues to contend with.

The bigger problem is this issue.

So hand scraping is possible, a dentist will first only “partially cure” the bonding material they’ve used to place a veneer. (Using that “blue” light you’ve probably noticed.)

That way, the cement is set enough that it will break away cleanly rather than rip or tear as it’s scraped off. But it’s still weak enough that it can be removed using just hand tools instead of requiring the use of a drill.

With super glue, you won’t have that option. It will either be too soft or runny (depending on the consistency of the type of cyanoacrylate product you use, liquid or gel), or else already set, with essentially no in-between time.

What happens if you leave an excess of super glue around a veneer?

As already mentioned above, anything that keeps a person from cleaning their tooth properly places it at greater risk for the formation of tooth decay and gum disease. And clearly, globs of set cement will prevent you from cleaning your veneer and its tooth effectively.

A consequence you may not realize.

For those who don’t know, it’s important to point out that persistent gum inflammation (gum irritation, gum disease) often leads to the occurrence of gum recession.

And since veneers are only placed on teeth that show prominently, the effects of gum recession, especially when only experienced by a single tooth in a person’s smile, makes it difficult to create an even and pleasing appearance for the patient.

3) What about reattaching a veneer using super glue as a temporary solution?

Even this possibility has complications associated with it. The main one being, how much of a mess will you create for your dentist when they’re called on to make a permanent repair? 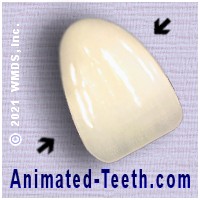 Your dentist should be able to reattach it. Don’t mess things up for them.

Scenario #1 – Your porcelain veneer has come off fully intact.

If you veneer has come off and remains full intact, your dentist can probably reattach it. But if you’ve already super glued it back on, you’ll dash your chances for that.

Scenario #2 – Only a portion of your porcelain veneer has broken off.

With this situation, the question would simply be, how much of a mess will you make for your dentist when a permanent repair is made?

Won’t a dentist just cement your veneer back on with super glue?

There really aren’t any dental applications for cementing restorations onto a tooth using cyanoacrylate cement.

We found plenty of references, some stemming back several decades, where this method had been evaluated. But, as an example, one such paper (Herod) states that “these (applications) have not met with much success. Newer techniques and materials seem superior in this aspect of dentistry.”

Additionally, we couldn’t help but notice that a paper by Griffith expressed concerns about:

Will applying super glue to your tooth harm it?

We won’t provide a specific answer to this question (there are too many variables involved) but we will mention two research studies whose conclusions seem to suggest that it doesn’t.

As examples, here are two dental applications for cyanoacrylate that may exist and an explanation of what they seem to imply.

A paper by Javid discusses the successful application of cyanoacrylate directly to the root surface of teeth to help to decrease the level of “root sensitivity” that the patient experiences.

Usually, all surfaces under the veneer are (only) enamel.

Roots are composed of the hard dental tissue called dentin and it has a close association with a tooth’s nerve. In comparison, the type of tooth tissue that a veneer is bonded onto is enamel, which has much less of an association. (See picture.)
So, to extrapolate from this paper’s findings, even if, perchance, some dentin showed through and was exposed on the tooth’s surface under the veneer, one wouldn’t expect it to be adversely affected/irritated by exposure to cyanoacrylate (at least the type of product used in the study).

When doing a filling, a dentist’s work will sometimes come very close to the tooth’s nerve tissue. And if so, they will look for a way to help to influence its response (a process termed “pulp capping”).

A study by Aljandan evaluated the use of cyanoacrylate as a pulp capping material. It stated that the authors found the material to be “biocompatible and suggested to (it) be studied further on human teeth.”

The bottom line, however …

Despite these last positive points, it still seems to us that attempting to reattach your lost veneer with super glue still makes a poor choice and we can’t imagine that your dentist would recommend it.

Aljandan B, et al. The effectiveness of using different pulp-capping agents on the healing response of the pulp. Indian J Dent Res. 2012

Javid B, et al. Cyanoacrylate—a new treatment for hypersensitive dentin and cementum. The Journal of the American Dental Association. 1987