– What is a rubber dam / dental dam? | What purpose does it serve? | How important is it to use one? | How is a dam placed? | What’s it like to wear one? | Managing problems: Latex allergy, breathing difficulty.

What is a rubber dam?

When used in conjunction with endodontic procedures …

Our picture below shows one being used in real life.

How a dental dam works.

Our diagram below (a cross-sectional view of a patient’s jaw and teeth) should make the basic premise of using a rubber dam clear. 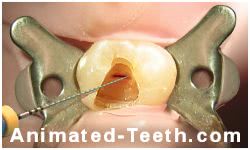 A tooth with a rubber dam in place and ready for its root canal treatment.

A tooth with a dental dam in place.

What purposes does a rubber dam serve during root canal treatment?

a) One involves benefits it can provide for your dentist as they perform your tooth’s work.

b) The other has to do with the protection and advantages it provides for you, the root canal patient.

a) Benefits for your dentist and procedure.

A dam aids in maintaining an aseptic operating field.

One of the main goals of root canal therapy is cleaning the interior of the tooth. Why? | How?

Placing a dam helps to ensure that contaminants from the mouth (saliva, debris, bacteria) aren’t allowed to enter the tooth as the dentist proceeds with this work. 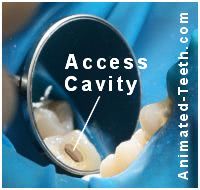 In our picture, it’s easy enough to imagine that if a dental dam wasn’t in place it would be a simple matter for oral fluids to enter into the tooth via the access cavity that’s been created for its work.

The tooth isolation that a rubber dam provides creates some procedural advantages for the dentist.

b) Benefits for the patient.

Performing the root canal procedure involves the use of a number of small instruments (such as root canal files) and several types of medicaments (like the solutions used to periodically flush out the interior of the tooth Why? | How?).

Without a dental dam in place, if any of these are lost in the patient’s mouth, the episode that follows may result in tissue irritation, harm or even damage. This is especially true if the item is aspirated (inhaled) or swallowed.

Of the two, complications involving liquids are the more common. Admittedly, even when a dam is not placed, aspiration or ingestion of root canal instruments is a very rare event.

Benefits associated with the COVID-19 pandemic.

An issue that’s become a major concern since we originally created this page is the fact that the use of a rubber dam during a person’s root canal procedure is a major aid in helping to prevent the spread of airborne pathogens (like the COVID-19 virus) from infected patients. It does so by keeping patient oral fluids (saliva) from being included in the aerosol (mist, splatter) that’s created as their treatment is performed.

And while the use of a rubber dam can be implemented with a variety of other dental procedures too, the fact that its use is unequivocally considered to be the standard of care required when non-surgical (conventional) root canal treatment is performed (see next section) means that having endodontic therapy may arguably be the least likely dental procedure to spread the virus.

How important is the use of a dental dam during endodontic therapy?

There is no question that in regard to: 1) The opinion of the dental community as a whole and 2) The training your dentist received in dental school … that the importance of using a rubber dam while performing root canal treatment is paramount.

X-ray Diagnosis
The Procedure
Rubber Dams
Does it hurt?
How long does it take?
How many visits?
Pregnancy issues.
Post-op aftercare.

a) How dental dam use affects root canal success.

Previously on this page, we outlined some of the procedural advantages that a rubber dam provides. And one might assume that these benefits should translate into an improved success rate for teeth treated with one in place.
Research documenting this effect has been scarce, primarily because of the ethical dilemma that the design of such a study would create. (Performing endodontic therapy for patients without the use of a rubber dam, which is a breach of the standard of care that a dentist is expected to provide.)
None the less, researchers have found ways to document the beneficial effect of dental dam usage:

This study evaluated a database of over 1/2 million teeth that had received root canal therapy (the work was initial treatment, no retreatment cases were included).

Over this short duration, the survival probability (the probability of not being extracted) for the teeth whose root canal procedure was performed using a rubber dam was 90.3%. The survival of teeth treated without the benefit of a dam was 88.8%.

While seemingly a small difference, statistical analysis of the data determined that dam usage provided a significantly greater survival probability for teeth.

This study evaluated 612 teeth whose initial root canal treatment had failed and were then retreated. It was determined that treatment success was significantly better for those cases where isolation with rubber dam was used.

(This is a historic study to which we do not have access. Our reporting is based on a citation found in a 2009 paper by Ahmad.)

This investigation evaluated 100 patients to determine what factors were most associated with continued pain after the initiation of root canal treatment.

“Lack of use of rubber dam” was the number one factor, and was observed in 87% of patients.

(This is a historic study to which we do not have access. Our reporting is based on a citation found in a 2009 paper by Ahmad.)

Other effects on treatment outcome.

As mentioned above, when a dam is not used during treatment the solutions used to flush (irrigate) the interior of the tooth might be spilled into the mouth and/or swallowed, resulting in irritation or harm.

Studies have shown that dentists who do not place a dental dam tend to use less effective irrigating solutions (which is likely to affect case success) as a way of minimizing immediate complications if an accident occurs.

b) Our comments about dentists who do not utilize a dental dam.

On average, it seems well justified to state that not using a rubber dam during root canal therapy compromises treatment outcome. However, for any one tooth’s procedure, it’s possible to make the case that establishing tooth isolation via another method (like placing cotton rolls aside the tooth) could prove effective.

We think that any patient who assumes that their tooth’s procedure is an exception to a well-established guideline, and also accepts the premise that the alternative method of isolation used for their procedure is as predictable as the use of a rubber dam, is naive at best.

It seems more likely that the dentist who is providing their treatment has simply fallen into bad habits (we might add, completely contrary to the way they were trained in dental school). If your dentist doesn’t use a rubber dam during your root canal procedure, you should be asking questions.

Even accepting the case that effective tooth isolation might be maintained without the placement of a dam, a patient should note that this approach disregards concerns for their safety during their procedure.

As discussed above, the placement of a rubber dam prevents the possibility of swallowing or inhaling objects or medicaments used during the patient’s procedure. No other method of tooth isolation can provide this same level of insurance.

How does a dentist place a dental dam?

Placing a rubber dam on a tooth for its root canal procedure is a simple enough process, although getting everything set exactly right can prove to be a bit of a wrestling match for the dentist (hence one of the reasons why some don’t place them). 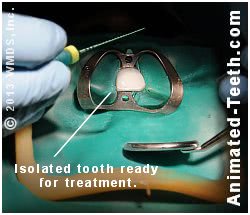 A rubber dam clamp and frame in use. 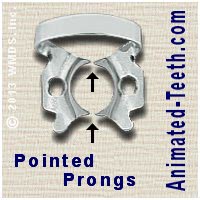 What is a rubber dam clamp?

A rubber dam clamp is in reality a metal spring.

Your dentist will have an assortment of dam clamps, each having a unique design specially created for a specific type of tooth. (Our picture above shows a clamp designed for use with lower molars. Other photos on this page show clamps in use with other types of teeth.)

Note: The local anesthetics used in dentistry typically aren’t effective in conking out the sensation of pressure. For that reason, despite being numb you may feel the pressure of the clamp grasping your tooth.

What if you’re allergic to latex?

Despite the name “rubber dam,” the sheet of elastic material actually used is usually latex.

Some people have an allergy to latex. If so, a sheet of some other material (nitrile, polyisoprene, polyethylene or polyvinyl chloride) can be used.

Additionally, all types of dam materials can be purchased in “powder free” form, if that agent (usually corn starch) is an allergen for you.

How uncomfortable is wearing a dental dam?

We’re under the impression that patients generally find the use of a rubber dam at least tolerable, if not the preferred experience.

In regard to the use of a rubber dam during root canal appointments, papers by Madarati and Ahmad both state that reporting from surveys has shown that patients have no objection to the use of a dental dam, and respond with a preference for its use with future visits.

What if wearing a dental dam interferes with your breathing?

A rubber dam usually covers all of a person’s mouth. And for those people who have trouble breathing through their nose (and therefore need to breathe through their mouth) this can present a problem.

Fortunately, there’s a easy solution. Your dentist can simply cut a hole through the dam in an out-of-the-way (off to the side) location. That way the benefits and advantages of using a dam are retained, and you’ll still be able to breathe through your mouth as needed.

Madarati A. Why dentists don’t use rubber dam during endodontics and how to promote its usage?