Peroxide tooth whiteners: What are the safety concerns?

– Toxicity / Cancer / Does it cause damage to teeth, soft tissues or dental work? | The science of carbamide and hydrogen peroxide whiteners.

Tray-based technique utilizing a 10% carbamide peroxide whitening gel (the basic system dispensed by dentists and the one we discuss on our pages) was first introduced in 1989. Since then, numerous studies have documented that, while it does have the potential to create side effects, it is safe to use.

That’s why tray-based technique has gained such widespread acceptance by the dental community as a whole. The vast majority of dentists in this country offer it as a service because they know it has been time-tested.

How do peroxide whiteners work?

With whitening gels, it’s their peroxide component that’s the active ingredient in creating their tooth-bleaching effect, via a chemical process referred to as a re-dox (oxidation-reduction) reaction.

The specific compound that breaks down to release free radicals is hydrogen peroxide.

Then why is carbamide peroxide used?

Carbamide peroxide can be used in whitener formulations because when it’s exposed to water it breaks down into hydrogen peroxide (and urea), which then breaks down and creates the whitening effect as described above.

Carbamide peroxide is used because it’s a comparatively stable compound. This helps the manufacturer to ensure product quality and consistency at the consumer’s end. We discuss these issues in detail below.

What are the safety concerns of peroxide whiteners?

As a point of reference, the safety issues discussed here are with the use of a 10% carbamide peroxide bleaching agent in mind (like that used with the entry-level tray-whitening kits dispensed by most dentists). It delivers a hydrogen peroxide equivalent of about 3.5%.

[In comparison, professional/in-office bleaching systems typically use products that have a hydrogen peroxide content (HPC) of possibly 35% or more. Whitening strips, usually have a 9 to 14% HPC.]

A) Can it cause cancer?

It’s been postulated that the use of whitening gels might cause cancer of the soft tissues of the mouth. These concerns are based on the fact that they release molecules known as “free radicals,” which might damage a cell’s DNA.

Studies have not identified a risk. The following facts might help to put any concerns you have at ease. 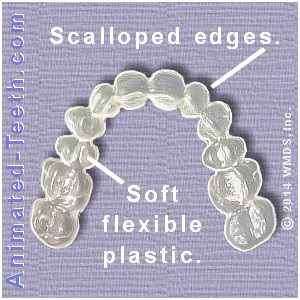 FYI –Although peroxides and the free radical molecules they release have the potential to cause harm, levels high enough to cause concern about carcinogenicity are not reached during whitening treatments.

From studies with lab animals, researchers have calculated what is considered to be the human threshold of toxicity for peroxides.

As a general practice, this value is then divided by 100 to come up with a dosing level that contains a significant security factor in ensuring a safe level of exposure.

Is whitener safe to use?

Surprisingly, the everyday dosing of 10% carbamide peroxide whitener (3.6% hydrogen peroxide equivalent) used with tray technique comes close to the security limit for adults. (This would assume that 100% of the dosing was swallowed.)

Without question, quantities of any type of whitening product should always be stored securely and out of the reach of children and pets.

FYI –
To us, this issue is yet another reason why we think that a 10% carbamide peroxide whitener makes a better choice than a more concentrated one.

Also, there’s no reason to use a lot of product for each session. Just small dabs in the tray are adequate.

C) Does it damage soft tissues?

The free radicals released by the breakdown of peroxide compounds are known to interact with lipids and proteins and result in cellular damage. 10% hydrogen peroxide (or greater) is potentially corrosive to mucous membranes (like the linings of the mouth and throat).
While soft tissue irritation is a common side effect of at-home whitening, long term studies evaluating the use of 10% carbamide peroxide whitening gels (they produce a 3.5% hydrogen peroxide yield) have shown no long-term ill effects.
▲ Section references – ADA

D) Does it damage tooth enamel?

Some dental researchers have reported significant changes in tooth enamel samples exposed to peroxide whiteners, others only minor to none. The types of changes found include: increased surface roughness, increased porosity and loss of microhardness.

These conflicting reports mean that one can’t just assume carte blanche that performing elective whitening treatments are totally without consequence. However, the 25-year history of the use of clinical use of tray whitening by the general population as a whole has not demonstrated a major concern.

High concentration and acidic whiteners are more likely to cause damage. Whiteners that contain fluoride (a compound that promotes enamel repair) may help to minimize these effects.

There are two cases documented in dental literature where the use of an over-the-counter product did adversely affect tooth enamel.

These cases involved: a whitener that had a high peroxide content, the use of an acidic pre-rinse, or a whitener that itself was acidic. (None of these conditions are a part of tray whitening as we describe on our pages.)

These products were used without the oversight of a dentist (overuse might have been involved). The tooth damage they caused was irreversible and the dental treatment needed to repair it involved significant effort and cost.

FYI –
Anything that’s beyond what’s stated in your product’s instructions should be considered overuse, as should long-term continued / repeated use.

High-quality products (like those dispensed by a dentist, see below) will have a neutral pH (neutral acidity) and quite possibly fluoride.

E) Will it harm a tooth’s nerve tissue?

While peroxide bleaching agents are able to penetrate tooth enamel and dentin and reach a tooth’s nerve tissue in as little as 5 to 15 minutes after application, research has shown that the quantity involved is too low to cause permanent tissue damage.

Studies evaluating 10% carbamide peroxide whiteners have not identified a long-term problem with their use. One study’s findings were that no one in their 4.5 and 7-year follow-up groups reported requiring root canal treatment for any tooth that had received whitening treatments. The clinical observations of the dental community as a whole over the last twenty-plus years seem to confirm these conclusions as well.

Lab studies suggest that some dental materials are affected by bleaching gels. But roughly 25 years of clinical use of tray technique with a 10% carbamide peroxide whitener has not revealed any significant problems or concerns related to this issue. We discuss this topic in greater detail here: “Effects of peroxide whiteners on existing dental work.”

Note: The main difficulty encountered with existing dental work is that it will not lighten during the whitening process (with some exceptions, see the link above). This means that pre-existing dental work will usually have to be replaced so to match the person’s new, post-bleaching tooth shade.

G) Is it safe for pregnant women?

Due to the lack of research evidence on this subject, the American Dental Association’s (ADA) guidelines recommend against performing whitening treatments during pregnancy or while nursing.

H) Is it safe for children and adolescents?

Once again, due to a lack of research evidence, the ADA’s recommendation is that bleaching treatments be delayed until the eruption of permanent teeth. And that a dentist-dispensed system should be used, with both the dentist’s and parent’s close supervision (so to prevent adverse effects and overuse).

An article by Haywood on the subject of teeth bleaching suggests a minimum age of 10 years for tray whitening.

The whitening gels used with tray-based technique are formulated with either carbamide or hydrogen peroxide (see below).

We think it’s a good idea to use a 10% carbamide peroxide product (and only discuss the use of it on our pages) because it’s the most studied.

Most manufacturers make more than one whitening gel product, each of which has its own specific concentration. We’ve seen carbamide peroxide whiteners that range between 10 and 44%.

A gel needs to be thick enough to stay in the bleaching tray but it also needs to be runny enough that it spreads out and covers over the teeth being treated. Emulsifying (thickening) agents are added to get just the right consistency.

Some manufacturers include a desensitizing agent in the formulation of their product in the belief that it helps to minimize the user’s potential for experiencing tooth sensitivity.

Here’s a list of some brands that we found that do contain a desensitizing agent. In most cases, the compound that’s been added is either potassium nitrate or fluoride.

Many gel formulations include a flavoring agent. This is especially common with gels that contain a relatively high concentration of peroxide.

Here’s a list of some brands that contain flavoring.

By nature, peroxides are relatively reactive compounds. And because of this, they’ll tend to degrade over time, thus compromising their effectiveness.

As a way of increasing shelf life, most whiteners contain a stabilizer. You can expect that most carbamide peroxide-based gels have an intended shelf life of at least one year. The cool, dark environment of a refrigerator makes a good place to store whitening products.

The pH (measured acidity) of a whitening product should be as close to neutral as possible (pH 7.0). Whiteners that have a relatively high acidity are more likely to create bleaching-induced tooth sensitivity and, in extreme cases, even tooth damage (see above).

It’s generally considered that a pH range of 5.5 to 8.0 is acceptable. As a way of achieving this measure, most whitening gels include buffering agents.

When each has been formulated to deliver a similar number of free radicals (see above), both hydrogen and carbamide peroxide whiteners can be considered to be equivalent products.

There are, however, subtle differences that might make one a slightly better choice for you than the other.

The difficulty with hydrogen peroxide.

As compared to carbamide peroxide, hydrogen peroxide is more reactive and this characteristic creates a difficulty.

The advantage of carbamide peroxide.

When a carbamide peroxide gel is dispensed, a two-step process begins.

Because this transformation takes time, it means that free radicals are produced over a longer time span, and at a more sustained rate.

What does this difference mean for you?

The type of peroxide a whitener has been formulated with influences the way it’s best used.

(As evidence of the above, take a look at our lists below. Two of the carbamide brands have the word “night” right in their name. In a similar fashion, two of the brand names of hydrogen peroxide products contain the word “day.”)

Here’s a list of gels sold directly to dentists for use with their patients. As you can see, both hydrogen and carbamide peroxide products are readily available.

a) Examples of carbamide peroxide products.

b) Examples of hydrogen peroxide products.

Which makes the right choice for you?

As we stated previously, both types of gels can be formulated to be essentially equivalent products. And, as evidenced by their availability, both types seem to have been accepted by the dental community as a whole.

We lean toward the use of a 10% carbamide peroxide gel.

Sulieman AM. An overview of tooth-bleaching techniques: chemistry, safety and efficacy.