– Raising gum tissue flaps to access the jawbone. / Creating the pilot hole for the implant. / What kind of anesthesia is used?

This page outlines and illustrates the series of steps that a dentist follows when placing a dental implant. In most cases, a person’s procedure can be performed right in their dentist’s office.

The steps of the dental implant procedure. –

Part 1 of our overview (this page) covers the beginning of the process through the completion of the pilot hole for the implant. The remainder of the procedure is outlined in Part 2.

Having an implant placed is a surgical procedure. And for that reason, a local anesthetic (and possibly also sedation or a general anesthetic) is used. We discuss this issue at the bottom of this page.

The gum tissue is flapped back to reveal the bone at the implant site.

As an initial surgical step, the dentist will need to access the bone in the region where the implant will be placed. To do so:

Once the gum tissue flaps have been raised, the dentist will evaluate the shape of the bone that’s been exposed.

Ideally, this portion of the jaw should be relatively flat and smooth on top. If the dentist finds differently, they will use their dental drill and reshape it so it meets the needed conditions.

Steps of the implant procedure.

Treatment variation – A less invasive way to access the jawbone.

In those instances where:
There’s a chance that the dentist can access the jawbone through a small circular incision rather than by raising tissue flaps.

The advantage of using this process is that it reduces the amount of surgical trauma that’s created during the procedure.

Step 3 – Identifying the position for the implant.

Once the bone has been accessed, the dentist will use a series of drills, each of increasing diameter, to prepare a hole into which the dental implant will ultimately be placed.

As a starting point for this process, the dentist will first use a small round bur (bur = dental drill bit) to make a divot in the bone.

Initial penetration of the pilot drill.

This divot, which penetrates the bone’s hard outermost layer, helps to ensure that the positioning of the pilot drill (the first drill bit used deep inside the jawbone) is easily centered in the implant site.

Step 4 – Creating the pilot hole for the implant.

The initial drill that’s used when making the hole for a dental implant is called a pilot drill.

This is simply a small diameter drill bit which, as its name implies, is used to create a hole that serves as a guide for other drills used later on.

A guide for the drill.

When using the pilot drill, the dentist may make use of a plastic jig. This is a device that they’ve created ahead of time using plaster casts of the patient’s mouth. When it’s used: 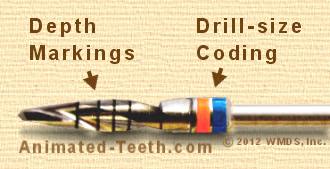 A bone drill used during the implant procedure.

During this initial phase of drilling, the pilot is just used to create a hole about one-third to one-half the total length needed for the dental implant.

Checking the orientation of the pilot hole.

Step 5 – Evaluating the initial orientation of the pilot hole.

Once the initial portion of the pilot hole has been created, the dentist will insert an alignment pin into it.
The idea is that the pin gives the dentist an opportunity to double-check the orientation of the hole that’s being created.

If its alignment seems off-target (such as tipped too far in one direction), since the hole is only a partly as deep and wide as it will need to be, its orientation can still be corrected.

After making any needed adjustments, the dentist will resume their drilling.
They will now extend the pilot hole far enough to accommodate the full length of the dental implant they will be placing. Measurement markings located on the drill itself help the dentist to gauge this depth.

The bone must be treated with care.

It’s essential that the dentist does not overheat the bone during the drilling process.

Overheating can result in bone cell death which, in turn, will prevent successful osseointegration (bone to implant fusion).

So to avoid this complication, the dentist will ensure that the drills they use are sharp and not used with excessive drilling speed or pressure.

During the drilling process, they’ll continuously flush the tooth implant site with water or saline solution as a way of minimizing the amount of bone-damaging heat that’s generated.

Evaluating the depth and orientation of the completed pilot hole.

Step 7 – The final check of the implant’s pilot hole.

The dentist will now reinsert the alignment pin into the completed pilot hole. This allows them an opportunity to confirm that its overall alignment and positioning is suitable.
The measurement markings on the pin also allow the dentist to confirm that the depth of the hole is sufficient to accommodate the length of the planned implant.

An x-ray may be needed.

In some cases, the positioning of a dental implant may be close to important
anatomical structures (nerves, blood vessels, neighboring teeth).

If so, the dentist may need to take an x-ray of the implant site while the alignment pin is in position so they can evaluate its relationship to them.

Skip directly to Part 2 of the implant procedure. >>

What types of anesthesia are used for dental implant surgery? 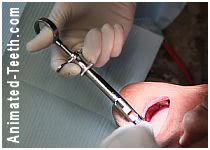 A local anesthetic (Novocaine, more likely lidocaine) is usually all that’s needed for a person’s implant procedure.
“Locals” are administered by way of giving an injection (a “shot”). This is the same technique that’s used to numb teeth for extractions and fillings.

Sedation is an option.

For patients who have anxiety about their proposed surgery, a decision might be made to use some type of conscious sedation technique during their procedure so they are more relaxed. (The use of a local anesthetic is still required.) Here’s more information: Conscious Sedation.

Some implant cases may benefit from the use of general anesthesia. With this technique, medication is used that places the patient in a state of deep sleep. (One where the patient is unable to react to stimuli.)

c) What type of anesthesia should be used for your surgery?

A decision about anesthesia typically hinges on factors such as case difficulty and expected treatment time. Here are some examples:

How soon after extraction do they need to be placed to stop tooth movement (in prep for future potential implant)? An oral surgeon is doing the procedure, not a prosthodontist, do I need to go to two offices in a day?

It seems that you plan to have a tooth extracted. And you’re curious about when some type of replacement tooth needs to be placed, so to keep the neighboring teeth from shifting (especially to the extent that would interfere with implant placement later on).

Historically, edentulous spaces (a location without a tooth) have been left unrestored for a period of 6 months to even a year before finally being filled in via implant placement (a new completed artificial tooth).

And while there probably is some degree of tooth shifting that takes place during this type of time frame, it’s typically minimal enough that it’s not problematic. Your dentist’s thoughts would be the definitive opinion on this.

To shorten how long the space goes without a completed tooth, nowadays:
1) Implants are sometimes placed immediately following a tooth’s extraction (same visit). Then 4 to 6 months of healing are allowed before the artificial tooth is placed on the implant.
2) In cases where an implant is placed immediately following the tooth’s extraction, it may be possible to “load” the implant then too (its artificial tooth placed on it immediately).

In your case, it’s not so clear that you’ve yet consulted about having your tooth replaced. Nor is it clear that your oral surgeon knows you plan to have an implant placed. Having made plans prior to your extraction may make one of the two options above possible (they both involve special considerations), thus shortening the period you have to go without a tooth.

In the case of #2 above, yes, you would typically have an appointment with your dentist (to have the tooth put on the implant that the oral surgeon placed) within 48 hours of the implant’s placement.

I had 11 teeth, all with fillings, removed. Cheaper than replacing fillings. Can’t afford implants now. How long before I need graft?

It is this person who should direct your reconstruction activities. If expertise beyond their level is needed for some aspect of your treatment (like performing grafting and placing your implants), they will then consult with the dentist they or you have chosen for that work. After all needed information has been collected, a decision can then be made.

The timing for the grafting procedure will be affected by whether or not implants will be placed at the same time.

In the case where these two steps are separate procedures, this paper suggests (in the “ridge preservation” section) that waiting 6 to 8 weeks for grafting is common. But this issue is for your dental professionals to decide.

If you haven’t already seen our page, here’s where we discuss the “sinus lift” grafting procedure.