–   a) The Oral-B Smartphone app.     b) The wireless Smartguide unit.   c) Brushing & quadrant timers.     d) Brushing pressure indicators.   |   How these features work and which ones are important to have.   |   Battery charging. / Battery replacement.

This page explains various features and capabilities of the Oral-B rechargeable toothbrush line (use this link to determine specifically which brushes have which features).

Oral-b features explained on this page.

What does having Bluetooth connectivity do?

The Oral-B Bluetooth feature provides a means by which your toothbrush can communicate with the Oral-B app when installed on your smartphone (iPhone or Android). The app, in turn, can give you feedback about your current brushing session and past history. The app is free and can be downloaded from the usual places (iTunes, Google Play).

Oral-B would suggest that the phone app helps to motivate your brushing habits, as well as improve your session’s effectiveness and safety.

What type of details does the app report?

The information shown on your phone can include (depending on model):  a) The brushing timer.   b) Quadrant indicator and timer.   c) Toothbrush mode setting.   d) Excessive pressure warning.   e) Brush position detection (mouth mapping).

Note: A lot of this information is a duplication (albeit in a nicer visual form) of what your toothbrush already indicates to you via LED’s, sound, flashing lights, or vibration.

Which models have which app capability?

Generally speaking, the level of sophistication of the app experience you get increases as you rise up within the Oral-B lineup. (Model price is a pretty good indication of this.)

We make note of the differences in app capability between models on our All Oral-B toothbrushes page.

Is the Smartphone app a valuable feature to have?

We see the brushing app strictly as a motivational tool. Nothing about it makes your toothbrush function better. Instead, it helps you, the brusher, function more optimally. There is no question that you can brush just as effectively with or without the app, if you will.

On the other side of the coin, if you need motivation or instruction when performing your brushing efforts, or if monitoring your (or possibly your child’s) brushing performance over time is important to you, then having the app may make a significant improvement in your brushing outcome. And if that’s the case, it’s wonderful that such an option exists and you should seek a model that features it.

Our affiliate links can be used to shop for  Oral-b electric toothbrushes  on  Amazon.com

Tip:  If you think the smartphone app is important to have and use, you can find it on Pro 5000 and above.

The Oral-B SmartGuide is a stand-alone unit that communicates wirelessly with your toothbrush. It’s not a control or a touch screen, it simply reports information to you via an LCD display.

Fewer and fewer models now come with this feature. For all practical purposes, it’s been replaced by the functionality of the Bluetooth connectivity/Smartphone app feature discussed above. 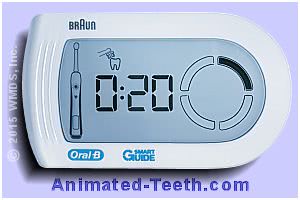 Is the Smartguide an important feature to have?

It’s easy enough to dismiss a true “need” for having the SmartGuide unit. That’s because so much of the information it relays is already signaled to you by your toothbrush via various sounds, lights, or vibrations.

Having said that, some users may find that having this information relayed to them visually is beneficial.

As described above, some Oral-b models have Bluetooth/wireless capability so a connection can be made with other devices (smartphone/Smartguide unit).
Airlines have varying restrictions on the use of wireless devices on flights. Some of them ban their use, others place restrictions on the type of device that’s permitted and/or when such units can be used.

The Smartring is a flashing LED indicator light. With more recent toothbrush lines, Oral-B has begun referring to this feature simply as the “Light Ring.”

The “360” reference to this light refers to the fact that it encircles the entire circumference of the brush handle (it’s found right below where the brush head attaches), and therefore can be visualized from all angles.

What does it do?

The Smartring is used to signal the following functions:

The default color of the Smartring can be personalized to any one of 12 different options. Choosing to do so is just decorative in nature.

All of the toothbrushes making up our all-models list come with a brushing timer.

How to use the quadrant timer.

Customizing the quadrant timer with the Bluetooth/Smartphone app.

The brushing/quadrant timer of toothbrush models that feature the Bluetooth/Smartphone app can be extended (see above).

Mid and higher-end Oral-B electric toothbrushes feature an excessive brushing pressure indicator. While the specific design of this feature varies by model, in general, when your brush detects that excessive pressure is being used:

This is Oral-B’s most sophisticated pressure detection system and it comes as a feature on their iO Series toothbrushes. It differs from the systems found on other models by way of the fact that it notifies you not only when you are using too much brushing pressure but also too little or just the right amount.

The system’s primary mode of communication is via the LED Light Ring located at the top of the brush’s handle (right at the base of the installed brush head).

This light shines white when you use too little pressure, red when excessive pressure is detected, or green if you’re using the proper amount of brushing force. (We explain more about this feature on the iO Series brushes here.)

Is having a pressure sensor necessary?

Brushing with excessive pressure can cause tooth wear, gum tissue abrasions, and theoretically even gum recession. It will also tend to wear out brush heads prematurely.

In regard to gum recession, studies have shown that the use of either Sonicare (McCracken) or Oral-b (Rosema) powered brushes do not place the user at risk of damage. And for that reason, we don’t favor one brand over the other, despite the fact that many Sonicare products do not offer this same type of warning system.

As a best practice, when you brush with an electric toothbrush just hold it in contact with your teeth and let it do all of the work. There’s no need to press hard or scrub.

Oral-B rechargeable toothbrushes charge by way of induction. This means you simply set them on their charging stand, no direct connection is made (like plugging in a wire).

All Oral-B’s feature a battery charge indicator, although its design (level of sophistication) varies by model.

Oral-B states that you can help to ensure that your toothbrush’s battery will maintain maximum recharging capacity by using it straight through (multiple sessions, no charging in between) until it’s fully discharged. They suggest doing this at least once every six months.

Note: Many models are 120 volts only.

It bears mentioning that the charging unit that comes with mid-range to low-end Oral-B toothbrushes is typically one that’s just been designed to be used with the type of electrical system that predominates in the country/area in which it was originally sold.

That means that USA/Canada models are intended for use only with 110-120 volt systems. Units bought in other countries (such as those in Europe) are typically designed just for 220 – 240-volt systems. (In comparison, most Sonicare products feature multi-voltage charging units.)

Some high-end Oral-B models come with a multi-voltage (110-240 volt) charging unit. In most cases, the needed transformer has been integrated into a power cord that has come packaged with the brush. The cord is then plugged into either the toothbrush’s standard charging base or else its charging-capable travel case, depending on which you intend to use.

The specific voltage system your toothbrush charger has been designed to work with should be printed on its base.

The design chosen by Oral-B for their rechargeable toothbrushes is one where the batteries housed inside aren’t intended to be replaced by the consumer (at least not in a simple, straightforward way). That means battery failure generally correlates with unit death.

(Note: Oral-B does sell “battery operated” toothbrushes, meaning models that run on replaceable off-the-shelf disposable batteries. Our website doesn’t recommend the use of these types of units because the brushing action they create is subpar compared to that of Oral-B’s rechargeables.)

We have run across some websites and eBay stores that appear to offer replacement rechargeable batteries for various Oral-B models. While we have no first-hand experience in dealing with them, what they offer seems to fall into one of the following two categories.

It seems to us that if the route of battery replacement is chosen, afterward it’s unlikely that your brush will retain its original level of resistance to moisture (factory seals have been broken). Taking extra precautions in that regard should help to extend the lifespan of your repair.

Our affiliate links can be used to shop for  Oral-b electric toothbrushes  on  Amazon.com

Tip:  The higher-end Oral-b’s offer more of the features discussed on this page. Further on down the lineup are their more value-oriented models, although it’s difficult to suggest purchasing any one below the Pro 3000.