While as a group sonic toothbrushes represent a very effective and technologically advanced form of powered toothbrush design, there’s another group, the “rotary” brushes (e.g. Braun Oral-B, Interplak, Rotat-dent), that also offer some unique benefits and, in some cases, advanced technology too. In fact, some of these models now even feature “sonic” capabilities.

What are “rotary” toothbrushes?

Although this category encompasses a wide range of individual designs, “rotary” electric toothbrushes are all similar in the fact that they have a set of rotating bristles.

Their configuration can either be:

Overall, you’ll find that rotary brushes make up a large percentage of all powered toothbrushes available, both high and low-end models.

With some rotaries, you’ll brush just one tooth at a time.

Rotary toothbrushes often have a comparatively small-sized brush head, as compared to the usual manual or typical sonic toothbrush.

Rotary brush heads tend to be smaller than a conventional toothbrush. 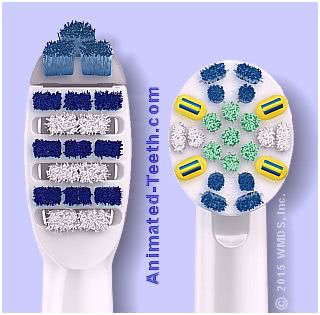 They tend to lend themselves to cleaning just one tooth at a time.

These smaller heads are usually intended to be used to clean one tooth at a time, as opposed to brushing multiple teeth simultaneously (like you do with a regular toothbrush).
Some people may find that this method of brushing does not appeal to them.

How fast do rotary brushes spin?

The units we describe on this page generate brushing actions ranging from just 1,300 up to 8,800 oscillations (or rotations, depending on brush type) per minute.

One manufacturer, Braun Oral-B, has added a high-frequency pulsating motion to some of its models to enhance their cleaning action (see below).

How do these brushes remove plaque?

Modern rotational brushes are frequently shown to have greater effectiveness than earlier models. This is likely due to advancements in both brushing action and brush head design.

There’s no shortage of research studies that seem to claim that they’ve documented that using (most all types of) powered rotary brushes is more effective/efficient than using a manual one.

But that’s not to say you can’t do a good job with either. (We discuss the topic “Why choose an electric toothbrush?” here.) But generally, if the idea of using a powered rotary brush appeals to you, there’s no reason not to buy one. They can be good, effective tools.

That means they offer both contact and non-contact cleaning.

Rotary electrics that create both an “oscillating and pulsing” brush head motion, like the Oral-b models that feature their “3D” brushing action, can be considered to be the pinnacle of rotary toothbrush design.

A brush head vibrating in the range of 40,000 pulses per minute can generate a “non-contact” brushing effect, just like sonic toothbrushes do (e.g. Sonicare).

What is non-contact brushing?

Non-contact brushing is a phenomenon where a powered brush is able to dislodge dental plaque beyond where its bristles actually touch, due to the way it agitates the fluids that surround the teeth. (Use the link above for more information.)

And although this cleaning action is only of secondary importance (as compared to the direct scrubbing action of the brush’s bristles directly against teeth), having it is considered a plus. And thus makes a reason to seriously consider getting a high-frequency oscillating-pulsating model, rather than just a conventional one.

Our affiliate links can be used to shop for  rotary-style toothbrushes,  like Oral-b, on  Amazon.com

Since both sonic and high-frequency oscillating-pulsating powered toothbrushes create a non-contact brushing effect, you might wonder which one makes the better choice.

What does research say?

We did find two research studies that compared both types of brushes.

We think it’s important to notice that the statements quoted from both studies each contain the word “slightly.”

Beyond the typical Oral-B design discussed above, there are other types of rotary electric toothbrushes.

Rota-dents have a unique design among rotary brushes.

How you use the brush.

Brush heads come in either pointed or cup-shaped (hollow) form. The cup-shaped ones splay out over tooth surfaces, while the pointed ones are designed for use in between teeth or along the gum line.

A Rota-dent is generally used on, or around, one tooth at a time, not unlike the way during professional cleanings each tooth is polished individually. (Any single user might or might not find this method of brushing especially appealing.)

Due to the shape of its brush head and the length of its bristles, it’s easy to imagine how a Rota-dent could excel in cleaning in between teeth and other difficult to reach areas (such as underneath bridgework). And in this regard, there is no other type of powered brush like it.

Interplak electrics fall under the category of “counter-rotational” toothbrushes. This is the only brand of brush that we’re aware of that uses this design.

This brush is relatively older powered toothbrush technology, whose heyday was in the late 1980s and on into the early 1990s.

During that time frame, this brush was frequently included in research studies and its effectiveness was generally found to be superior to previous generations of electric toothbrushes.

Since then, this brush seems to have been eclipsed by newer (although more expensive) toothbrush designs. The last published research we could find that included it in its study was dated 2001. Purchasing an Interplak isn’t necessarily a bad choice, just a dated one.

Our affiliate links can be used to shop for  rotary-style toothbrushes,  like Oral-b, on  Amazon.com

Tip:  Oral-b is unquestionably the dominant player in the field of rotary brushes. And for most people’s application, probably the best choice (due to their 3D motion/40,000 pulses-per-minute brushing action).