– What are they? Pictures. | Why do they form? | Incidence statistics. | What problems can they cause? | Diagnosis and treatment.

What is a mesiodens?

By definition, this is an extra tooth that lies between a person’s central incisors (their center two teeth). If more than one is present (which occurs in 20% of cases), the plural “mesiodentes” is used.

It’s easy enough to state that any mesiodens has come from a tooth bud because all teeth do. (Tooth buds start to form in the fetus as early as 6 weeks.) But beyond that fact, there’s less consensus about exactly why they form.

The predominant theory is that the person’s body has simply created more buds than is normal (referred to as hyperactivity of the dental lamina). But it also may be that during tooth formation, a single bud has split to create two teeth.

Predisposing factors for a mesiodens.

Whatever the precise cause, there are several factors that seem to correlate with individuals that have these extra teeth.

Having a mesiodens tends to correlate with family history. Twins, siblings and multiple generations of a family line frequently share this trait. Males are twice as likely as females to have one.

The presence of a mesiodens is frequently associated with certain medical conditions and syndromes. This includes: craniofacial anomalies, such as cleft lip or palate, Gardner’s syndrome and cleidocranial dysostosis.

But clearly, having one of these extra teeth is not an indication that you have one of these conditions. A mesiodens can simply be an abnormality experienced by an otherwise normal individual.

How often do mesiodentes form?

The white shadow approximates the size and shape of its root.

Mesiodens are categorized according to their variation in size and shape.

This designation simply means that the extra tooth has a relatively normal appearance. (It just looks like having an extra front tooth.)

This term applies when the tooth is abnormal in size and/or shape.

What kinds of problems can having a mesiodens cause?

Several different types of complications can arise when one of these extra teeth is present.

a) Interference with the eruption of neighboring teeth.

The presence of a mesiodens is the most common reason for the delay, or even total failure, of a person’s central incisors (their two center teeth) to come in. This complication occurs in 26 to 52% of cases.

A mesiodens, erupted or not, will frequently cause the adjacent central incisors to become displaced, rotated or have a gap between them (a diastema). Studies suggest that the incident rate for these types of complications occurs in 28 to 63% of cases.

The root formation of a person’s central incisors may be affected by the presence of a mesiodens.

Root dilaceration (extreme root curvature) is one possible outcome. Root resorption (the presence of one tooth causing the root of another to dissolve away) is possible, although rare.

Research suggests that cyst formation in association with a mesiodens occurs in 4 to 11% of cases.

Rather than coming through the gums in normal fashion, a mesiodens may erupt ectopically (in an abnormal location or position).

This can include the patient’s palate, or even their nasal cavity (the case where the tooth is oriented in entirely the wrong direction).

The management of mesiodentes typically involves the situation where the tooth still lies embedded within the jawbone (eruption, full or partial, only occurs in about 20 to 25% of cases).

The treatment approach chosen will depend on the person’s stage of dental development.

Unerupted mesiodentes discovered in very young children are typically left alone for the time being. A part of the concern is that the surgical process that would be needed to remove them could damage the adjacent developing permanent incisors.

Once a child has first entered the mixed dentition stage (a point where their first permanent teeth should have started to come in), a dentist may recommend that the extra tooth should be extracted.

However, there is a risk that extracting the mesiodens during this stage will result in damage to the forming roots of the developing central incisors.

In cases where the mesiodens has been identified early on (like via x-ray examination), a decision may be made to just keep the child’s situation under observation.

The dentist may plan to only observe the child’s situation until that point when more complete root formation (2/3rds to 3/4ths, as determined by x-rays) has occurred. (The root formation of upper central incisors is generally expected to be completed by ages 9 to 10 years.)

At this point, the surgical process of removing the embedded supernumery is less likely to result in damage to these, now almost completely formed, teeth.

Difficulties associated with this approach.

The forces that cause tooth eruption diminish with age. And that means that the later in life that a mesiodens is extracted, the more likely it is that the central incisors won’t go ahead and come in on their own (erupt spontaneously).

If spontaneous eruption is ultimately able to occur, it may take some months or years following the removal of the offending extra tooth. And for this reason, after its extraction, the dentist will need to periodically monitor the progress of the incisors via x-rays to get a hint of what progress they are making.

In cases where it appears that the incisors have adequate space in which to come in but haven’t shown any progress within the last 6 to 12 months, the dentist may determine that they need assistance.

This typically consists of exposing the unerupted teeth (a minor surgical procedure) and then attaching some type of orthodontic appliance (braces) to them, so to assist and guide them into place.

As a solution, the mesiodens is usually extracted and orthodontic treatment performed. [More about this digital makeover case.]

Whenever a mesiodens has been present (erupted or unerupted), some degree of generalized full-mouth tooth misalignment is common (tooth crowding, shifted midline). Orthodontic treatment (braces) can be used to correct these issues (as illustrated in our digital makeover picture).

It can be that even though a mesiodens is present, the person’s permanent teeth have still been able to come into place satisfactorily. If so, a decision might be made that the unerupted extra tooth should not be removed but instead monitored.

Periodic observation would need to include the use of x-rays so to evaluate for developing cyst formation or damage to neighboring teeth. 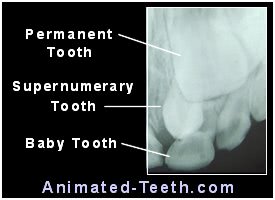 An x-ray of a mesiodens (supernumerary tooth).

Because around 75 to 80% of mesiodentes don’t erupt (pierce through the gums), the norm is if one is present it isn’t seen.

Since they are simply teeth (just extra ones) they can be identified via x-ray examination. One difficulty with early detection, however, is that the area where they lie isn’t always routinely x-rayed.

Deciduous supernumeraries frequently do erupt. But due to their normal-looking appearance, and the fact that young children often aren’t seen by a dental professional, they are frequently overlooked and have come in and ultimately fallen out without ever having been identified.

A simple tooth count is one way they can be discovered. (The normal number of deciduous teeth is 20.)

It’s fairly common that a search for the presence of a mesiodens isn’t begun unless the patient’s central incisors (one or both) are late in erupting, or else have come in but are displaced in position and/or alignment.

Additional tip-offs include that the primary (baby tooth) incisors have been over-retained (haven’t fallen out on schedule, at around age 6 to 7 years). Or else that the permanent incisors have erupted ectopically (in an abnormal location).

Dean JA, et al. McDonald and Avery’s Dentistry for the Child and Adolescent. Chapter: Development and Morphology of the Primary Teeth.

Meighani G, et al. Diagnosis and Management of Supernumerary (Mesiodens): A Review of the Literature.