10 things you shouldn’t do when you floss your teeth.

– These flossing mistakes make your efforts less effective, or even harmful. | Explanations | Pictures

What you don’t do when you floss can be just as important as what you do.

This page contains a list of flossing don’ts, which includes items that tend to decrease flossing effectiveness, or even lead to tooth or gum tissue damage.

Using mouthwash doesn’t replace the need to floss, period. And if you think about it, it’s easy enough to understand why.

This topic has even come up in court.

In 2005 a US District judge ruled that a well-known manufacturer’s claim that the use of their mouthwash replaced flossing was “false and misleading.” (Link)

#2- Don’t floss a million times a day, just floss once but do it right.

Some people tell their dentist that they floss several times a day. But when their dentist looks in their mouth they see little evidence of it.

The usual problem is that these patients are equating activity with effectiveness. They think they’re accomplishing when they’re not. As examples:

In both cases, the person really is “flossing” a lot, just never thoroughly and effectively. And unfortunately, it’s the latter two factors that count the most.

So rather than giving your teeth the once over multiple times a day, look for just one setting where you can take the time to do things right. And if you can do that more than one time a day, all the better.

Can you floss too much?

Not if you’re doing it right.

Directing pressure onto your gums with floss can hurt or damage them.

#3- Never let the floss put pressure on your gums.

When flossing between two teeth, don’t pull the floss straight onto your gum tissue.

The correct way to use floss between teeth is to pull it up against the side of each one and clean each separately. Remember, you floss your teeth, not your gums.

#4- Don’t ignore places that snag or break your floss.

You need to heed the hints that flossing can give you.

The sides of teeth are smooth. So if there’s a place where your floss snags, shreds or breaks, something is not right.

The overhang on this filling interferes with flossing.

A common cause of flossing problems can be due to “overhangs.”
This term refers to the situation where the edge of dental work (a filling, crown, etc…) isn’t contoured correctly and extends abruptly beyond the normal contours of the tooth (see picture).

Beyond man-made problems, existing dental conditions can also be the reason why your floss shreds, traps or breaks.

The sharp edges of a cavity can cut dental floss.

1) Cavities.
If tooth decay advances far enough, the hole that results may have sharp edges that interfere with flossing.
So, if a location that historically could be flossed uneventfully is now problematic, you could have a cavity. If you do it will only get worse until you have your dentist make the needed repair, so don’t delay in getting it checked out.
2) Tartar.
It’s conceivable that floss might snag on dental tartar (calculus) that has built up. Especially in the case where you hadn’t been properly flossing the area for a while.

Just like with a cavity, this problem won’t take care of itself. You’ll need to appoint with your dentist so they can evaluate your situation. If tartar is the culprit, a dental cleaning will be needed.

Flossing away plaque from these three locations is the goal.

#5- Don’t fail to clean all 3 must-do locations between your teeth.

When you floss, there are three locations that are important to clean.

Cleaning areas B and C is referred to as “subgingival” (below the gum line) flossing. Here are details about how to accomplish it.

You’ll do best using a piece of floss that’s longer rather than shorter. Flossing is difficult enough without struggling with your equipment.

Start out with using a piece that’s about 18 inches or so.

Later on and once your flossing habit has settled in, if 18 inches seems like more than you really need, then use less.

Holding your floss this way makes it hard to floss.

Holding your floss with the very same fingers you try to manipulate it with really doesn’t work very well.

Divide and conquer is the better way. Hold the floss with some of your fingers and work it around your mouth using others. These instructions describe how: Proper flossing technique.

#8- Don’t try to get fancy with your flossing.

Next time you’re at your dentist’s office and need a good laugh, ask your dentist or hygienist about some of the flossing techniques they’ve seen patients demonstrate for them.

It boggles the mind as to what these people think they’re doing. And while they may be flossing, there’s no question that they’re not being thorough and effective. 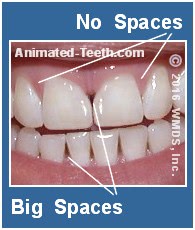 Bigger spaces are easier to clean with a larger size floss.

#9- Don’t use floss that’s too big or tiny for your needs.

Unwaxed, waxed, Glide® or Satin® flosses can each be suitable choices.

Bleeding gums is your sign that something is wrong. It’s an indication that the area can’t be or hasn’t been cleansed effectively.

With either scenario, continued flossing, as opposed to discontinuing your routine because it makes your gums bleed, is a big part of the solution.