Now, imagine that all of these odors were mixed up into a single cocktail and you had to take a whiff. Well, that’s pretty much what you do every time you smell someone else’s breath.

We didn’t just make that list up. The different compounds responsible for those kinds of stinky smells (see list below) are found in everyone’s breath.

And if their concentration is high enough, you’ll have bad breath. Or, if you can keep their levels to a minimum, you won’t. It’s pretty much as simple as that.


Where do these smelly compounds come from?

As it happens, the waste products produced by some types of oral bacteria are smelly sulfur compounds. And it’s these molecules that usually lie at the root of a person’s breath problems.

Some of the foulest smells you know are caused by sulfur compounds.

And while it may come as a complete surprise to you, each of these compounds is produced as a waste product by the bacteria that live in your mouth. And these molecules escape with your breath every time you exhale.
FYI: The compounds listed above are the big three sulfur compounds typically associated with bad breath.

Dentists refer to the foul-smelling sulfur byproducts excreted as waste by oral bacteria as “volatile sulfur compounds” (VSC’s). And it’s their presence in the air we exhale that others detect as “bad” breath.

[The word “volatile” describes the fact that these compounds evaporate (transform into a gas) quickly, even at normal body temperature. It’s this property that explains how these compounds are able to escape our mouth so rapidly and easily.]

FYI: Hydrogen sulfide and methyl mercaptan are the VSC’s primarily associated with bad breath that has an oral/bacterial origin (90% of halitosis cases).

… as well as some other stinky molecules too.

While the VSC’s in our first list above are generally considered to be the primary causative agents of bad breath, other types of volatile molecules can play a role too.

Some of these are the compounds that are responsible (at least in part) for the unsavory odors listed below.

It all boils down to concentration.

This wonderful mix of smelly compounds is found in the breath of all humans, no one is an exception. Fortunately, at low levels they can’t be detected by the human nose. It’s only when their concentration becomes elevated that others begin to notice them.

The term “anaerobic” describes the fact that these types of bacteria do best in an environment that’s devoid of oxygen.

FYI – Research suggests that the human oral cavity may be home to as many as 500 bacterial species, most of which are capable of producing smelly compounds that can cause bad breath.

But in particular, the following types of anaerobic Gram-negative bacteria have been identified as key producers of VSC’s.

A proposed mode of action is one where these bacteria cleave off sugar chains from glycoproteins, thus reducing them to a more basic form of protein molecule that’s then available for digestion by Gram-negative bacteria.

The key to controlling bad breath is to control the number of causative bacteria that live in your mouth.

The human oral cavity is home to hundreds of different types of bacteria. And there’s a constant battle for living space between the types that cause bad breath (which are mostly Gram-negative anaerobic ones) and those that don’t.

It’s the precise balance between these two that ultimately determines the quality of a person’s breath.

a) The role dental biofilms play.

The accumulation of biological films (the whitish coating that forms on teeth, above and below the gum line, and on the tongue) can tip the scales in favor of odor-causing bacteria.

So one way of controlling the number of offending bacteria that live in your mouth is to keep the level of biofilm that’s present (dental plaque) to a minimum.

b) The role food sources play.

Most volatile sulfur compounds are the waste products created by anaerobic bacteria as they digest proteins (or more precisely, the related compounds: proteins, peptides and amino acids).

FYI – Most specifically, studies indicate that it’s the breakdown of sulfur-containing amino acids (the building block molecules of proteins) that result in the formation of volatile sulfur compounds.

These are primarily Methionine and Cysteine. (Other sulfur-containing amino acids don’t play a major role because they are not incorporated into proteins.)

What’s the source of these proteins?

Even without having created an obvious exposure, like just having eaten something high in protein, it’s not hard for oral anaerobic bacteria to find their preferred meal.

Since the primary food source for the bacteria that cause bad breath is protein, you can help to control their numbers by limiting your intake of foods that are rich in them. More importantly, you should make sure to clean your teeth and mouth promptly after meals that have included them.

Foods that are protein-rich.

Make sure to clean your mouth after meals.

Keep in mind, if you’ve eaten a meal that contains high-protein foods, and you fail to clean your teeth and mouth thoroughly afterward How to., you’ve created the type of prolonged food source that’s idea for the proliferation of the kinds of bacteria that cause bad breath.

Where do the types of bacteria that cause halitosis live?

As discussed above, anaerobic bacteria do best in environments that are devoid of oxygen. And due to this fact, they’re typically found in the greatest numbers in the hidden recesses of the mouth. This includes:

(Takeaway: You may have noticed that two of the locations in the list above involve the tongue. That’s why tongue cleaning plays such a vital role in controlling bad breath. How to do it.)

The most common cause of halitosis is debris buildup on a person’s tongue.

a) The dorsum of the tongue.

For the vast majority of people, most of the bacteria that cause their breath odor live on the dorsum (top surface) of their tongue.
In fact, studies suggest that roughly 4 times as many bacteria (100 vs. 25) tend to attach to a single skin cell on the tongue as compared to other areas of the mouth.

Where on the tongue?

Think back to the breath testing experiments Self-testing. we outlined on the first page of this topic. 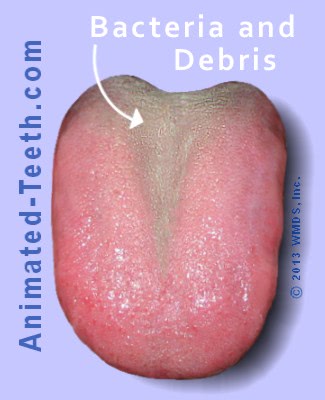 Smelly debris accumulation on the back part of the dorsum (top side) of the tongue.

Go to a mirror, stick your tongue out, and take a look. You’ll probably see some amount of coating on your tongue’s surface (see picture).
For most people, this film, or more precisely the anaerobic bacteria that live in it, is the fundamental source of their breath odor.

The coating is typically white but can also be yellow or grey. Some parts of it may even be brown or black.

The further back you look (toward your throat), the heavier the layer will usually be. (Researchers sometimes use the following terms to categorize the appearance of the film: dry, slippery, dry and rough, prickly and furred.)

The level of buildup will vary.

The amount of coating that forms can be influenced by the anatomy of the person’s tongue. For example, people who have a deeply grooved or furrowed tongue may find that they accumulate more coating than those whose surface is smoother.

Other factors can play a role too. For example:

Research has shown that there’s a direct correlation between the amount of coating on a person’s tongue and the total number of bacteria that are present (more coating = more bacteria). And in fact, the tongue can be home to literally billions of individual bacterial organisms. 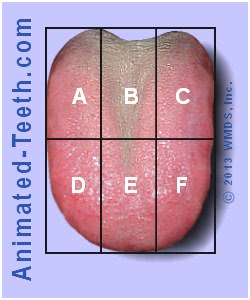 The greatest amount of coating is usually found in section B, followed by A and C. Sections D, E and F usually have the least.

As you can probably guess, when the anaerobic bacterial load on a person’s tongue is reduced (like by cleaning it), there’s usually a direct correlation (an improvement) in the quality of their breath. (That’s why tongue brushing or scraping Directions. plays such an important role in curing halitosis.)
▲ Section references – Rosing

As a way of documenting their patient’s status, some dentists use the Winkel index to quantify what they find. Using this system:

Odors can come from bacteria living below the gum line.

b) Bacteria that live around teeth.

The anaerobic bacteria that cause bad breath frequently find a home in places around your teeth too.

When you floss, you may notice that your floss dredges up a foul odor or taste. This odor is often most noticeable as you floss between back teeth.

These locations are places where anaerobic bacteria have found a home. The taste and smell you get is proof of this fact.

Gum disease causes deep pockets that are hard to clean.

The role of gum disease.

Even in relatively healthy mouths, anaerobic bacteria are able to find suitable (oxygen-deprived) places to live. These types of locations are however more numerous and available in the mouths of people who have periodontal disease (gum disease).

That’s because advanced gum conditions result in damage to the gum and bone tissue that surrounds a person’s teeth, the outcome of which is the formation of deep spaces termed “periodontal pockets.”

These recesses can be difficult, if not impossible, to clean. And that makes them an ideal undisturbed anaerobic environment for the types of bacteria that cause bad breath. (For more details, this page explains the halitosis / gum disease relationship. It’s role.

Our next page discusses important bad breath co-factors 8 culprits.. These are issues and conditions that tip the scales in favor of your developing halitosis, or a worse case of it.

Or if you’re more interested in just learning how to resolve your breath problems, this page outlines the plan needed for an effective halitosis cure. 3 goals to meet.