What are they? / What’s the difference between them? | How the herpes virus causes them. / HSV1 vs. HSV2. | What triggers outbreaks? | What is Primary Herpetic Stomatitis?

What is a cold sore?

Cold sores, also referred to as fever blisters, are a type of skin lesion caused by the herpes simplex virus that either form on a person’s lips, or else on their face in the area immediately surrounding their mouth. (The lesions display these identifying characteristics View list..)

Is there any difference between cold sores and fever blisters?

No, there’s no difference at all. These two terms refer to exactly the same type of oral lesion and can be used interchangeably.

Where do these names come from?

The derivation of these terms probably stems from the fact that a person’s outbreaks frequently correlate with periods of stress, like that caused by sicknesses such as a fever or a cold.

In scientific literature, these lesions are referred to as “recurrent herpes labialis.” This term is easy to interpret when it’s broken down into its component parts:

Recurrent = Meaning something that occurs repeatedly in the same way.
Herpes = A reference to the herpesvirus, the causative agent of these lesions.
Labialis = Reference to the fact that these sores typically form on or around the lips.

The causative agent of these sores (not to be confused with factors that trigger actual outbreaks View the list.) is the herpes simplex virus. But in most cases, what has caused your lesion is not the type of “herpes” that probably first comes to mind.

A little scientific background about the herpes virus.

Multiple types of herpesviruses have been identified (8 types currently) but only two of them are associated with the formation of oral-facial lesions. They are the herpes simplex virus “type 1” and “type 2.” Here are some primary differences between them. 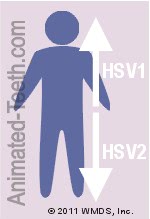 Most cold sores are caused by Herpes Simplex – Type 1.

How do you get oral herpes?

It’s generally considered that transmission of the herpes simplex virus occurs via direct contact with an infected individual (either their active lesion or saliva). We explain in greater detail here: HSV transmission.

Making entry into your body.

Once in contact with your skin, the herpes simplex virus binds to one of the cells making up its surface.
Then, an interaction between compounds found on the virus’s surface (glycoproteins) and skin cell receptors facilitates the capsid’s penetration into the cell. (The capsid is the portion of a virus particle that contains its genetic material, see photo viewer.)
The actual entry process involved can either be via membrane fusion (a joining of the membrane envelope of the virus and skin cell) or via a phagocytosis-like process where the membrane of the skin cell surrounds and “swallows up” (surrounds and engulfs) the virus particle. (Our photo viewer illustrates the latter process.)

The mechanism by which the herpes virus actually causes cold sores is probably substantially different than you’d expect. Here’s how this multi-step process takes place.

1) You didn’t “just get” the herpesvirus that caused your cold sore, you already had it.

When you think of having an infection, most people would logically just assume that they were recently exposed to the germs that have caused their problem. With cold sores, however, that’s not the situation.

Cold sores are a case of virus reactivation.

2) Where do the dormant virus particles come from?

The dormant virions come from an initial infection.

Most primary episodes do not take the form of a cold sore. And in fact, in most cases, the person doesn’t even display any significant symptoms at all. Because of this:

The stage is now set.

Once you have experienced your initial (primary) exposure to the Herpes virus, it remains inside your body for the rest of your life.

A number of precipitating factors and events have been identified, however, the level of importance that any one plays for any one individual will vary.

Triggers are generally categorized as either being systemic (factors involving multiple aspects of the person’s body) or local (regional events that affect the area of lesion formation).

a) The cold-sore gene.

It’s suggested that some individuals may have a genetic susceptibility to getting cold sores.

A paper by Kriesel reported that their team identified a specific gene on chromosome 21 (gene C21orf91) as the likely source for this trait, although the mechanism by which it has its effect is not fully understood. They have given it the name “Cold Sore Susceptibility Gene 1” (CSSG1).

We decided to look for evidence of a possible seasonal trend in cold sore/fever blister outbreaks.

Our method, and what our graph below shows, was to investigate how often people searched the Google index each month for the keywords “cold sores.” (We’re making the assumption that few people have an interest in this topic unless they’re looking for solutions for their own current/active lesions.)

As you can see, search activity for this topic seems to peak during the winter months. And that would make sense considering that it’s a time of year when people are often stressed (such as from a hectic holiday season or common cold) or exposed to harsh environmental conditions (cold, wind, dryness) that can result in lip chapping. (These events are known triggers for cold sore formation.)

Admittedly, our research method shouldn’t be interpreted as a rigorous scientific investigation. 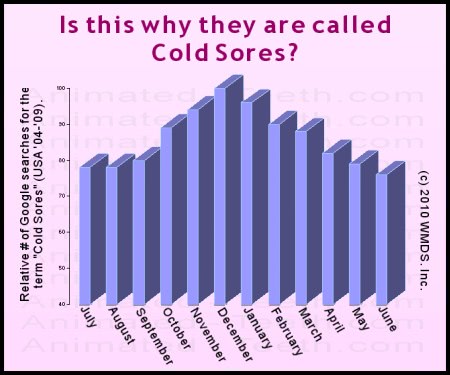 What happens after herpes virus reactivation has been triggered?

Following a person’s primary oral herpes infection What to look for., some of the virus particles that were associated with that event travel along sensory nerve fibers running from the affected area to that region’s corresponding nerve ganglion.

(A ganglion serves as a hub or relay station along a nerve fiber trunk. The one usually involved with cold sores is the trigeminal ganglion.)

Once they arrive, the virions take up permanent residence. And for most of their time in the ganglion, they exist in a dormant state.

The herpes virus lives in association with facial nerve fibers.

When activated, the virus forms a cold sore in the area the nerve services.

In response to some type of triggering event (like those listed above), the dormant virus particles become activated. (The actual mechanism by which this transformation takes place is not completely understood).
Once reactivated, the following cascade of events occurs:

It’s known that most of us do harbor the herpes simplex virus Statistics, yet not all people experience cold sores. Equally perplexing, of those that do, why do some people have breakouts more frequently than others?

While there’s no firm answer to these questions, herpesvirus reactivation is thought to be significantly influenced by the following component factors, each of which varies with each individual.

The basic idea associated with this statement is that when normal or optimal health conditions exist, a person’s immune system is able to keep the herpes virus relatively in check. But when it’s compromised (like during sickness), the virus has an easier time overcoming body defenses, replicating and causing lesions.

Why do cold sores tend to recur in the same place?

While you may not have noticed, the details above that outline the cascade of events that take place when the herpes virus becomes reactivated also explain why cold sores tend to reoccur in the same general location each time.

Once activated, the virus forms a cold sore in the area the particular nerve services.

Utilizing the same graphic shown above, here’s a recap.

How common is having the herpes simplex virus (HSV1)?

It’s estimated that roughly 80% of the general population has herpes simplex virus (HSV1) antibodies in their blood. Antibodies are proof positive that a person has been exposed because our immune system only creates them in response to the physical presence of virions within our bodies.

A person typically experiences their primary HSV1 infection before the age of 20 years. And then, once your first exposure has occurred, the virus remains inside your body (active or dormant) for the rest of your life.

Although most of us have been infected with herpes type 1, it only causes outbreaks (cold sores / fever blisters) in about one-third (20 to 40%) of the general population.

The rest of us do still carry the virus but, for whatever reasons, it remains dormant and we remain cold-sore-free.

Once activated, the virus forms a cold sore in the area the particular nerve services.

It’s your initial (primary) exposure to the herpes virus that then sets the stage where later on you (may) experience cold sores/fever blisters.

a) What are the signs and symptoms?

The signs and symptoms of a person’s initial infection of the herpes simplex virus (“primary herpetic stomatitis“) usually involve the following characteristics:

b) Why don’t the symptoms of primary herpetic stomatitis seem familiar to you?

You were very young. – If you don’t remember having had the classic signs and symptoms mentioned above it might be because you experienced them as a small child.

Your case was very mild. – It can be that you don’t remember going through this experience because your case was subclinical.

It’s been estimated that between 90 and 99% of all cases of primary herpetic stomatitis are either asymptomatic or so mild in nature that the episode goes unnoticed by the child or their parents.

▲ Section references – The textbooks by Regezi and Neville were used as primary reference sources for this entire page.

Agelidis AM, et al. Cell entry mechanisms of HSV: What we have learned in recent years.