– Known and suspected triggers for canker sore formation. | Events, compounds, conditions that can cause outbreaks. | When are likely times when lesions will form?

If you suffer from aphthous ulcers (the formal name for canker sores), you may feel that certain events tend to precede your outbreaks. And if you have these suspicions, you’re probably right.

Sufferers, along with researchers, have come to the conclusion that there are a number of different types of events, conditions, and compounds (a very wide variety of things actually) that can reasonably be considered to be triggers for the formation of canker sores.

However, a precise cause and effect relationship is often difficult to determine because one person’s triggering events can be entirely different than those that cause these sores in other people.

Here’s a list of outbreak triggers we discuss on this page.

As a prelude and a reminder, when reading through the outbreak factors discussed below it’s important to keep in mind that while many of them may be significant causes for some people, for others, including probably most people, they’re not factors at all.

So, if you find something on this page that doesn’t correspond with your experiences, it’s not that our information is inaccurate. It’s just that you’re one of the lucky ones, at least when it comes to that specific causative agent.

Note: Not all triggers are definitively proven.

And that’s precisely why we’ve used the words “known and suspected” outbreak triggers in this page’s title.

All of the causes we explain below are routinely included in scientific papers and textbooks that cover the subject of canker sores. And we would consider leaving any one of them out an omission. But it will take further research to confirm some of these causes definitively.

Here’s what’s so interesting about the subject of canker sore causes.

As you read through our information below, it should cross your mind that …

And that is exactly correct.

The science of the matter is that it’s the response of your own immune system that actually causes your aphthous ulcerations to form. It’s only the way that this response is triggered that varies between people.

Fundamentally, it’s the presence of antigens that’s the culprit.

In regard to your immune system’s response, it’s its detection of antigens (“foreign” molecules) in the oral tissue where your ulceration forms that sets the process of lesion formation into motion. So, in our discussion below, we try to explain how or why each factor facilitates/alters the antigen/skin tissue/immune system relationship.

If you’d like more information about the immune system response that takes place, jump to this page: The biology of Canker Sore formation. )

For many people, the formation of their aphthous ulcers is preceded by some type of tissue damage or trauma to the area where their lesions appear.

When oral tissues are traumatized, an opening is created on the surface of the skin through which antigens (the molecules that trigger the immune system response that causes canker sores to form) can enter. The skin’s surface simply no longer provides an effective barrier.

B) Tobacco use / Smoking.

Researchers have noticed that when people initiate a habit of tobacco use (either smoking cigarettes, a pipe, etc… or the use of smokeless/chewing tobacco) their frequency of canker sore outbreaks tends to decline.

And if able to quit their habit, just the opposite occurs and their outbreak frequency is found to increase.

The use of tobacco products irritates soft oral tissues. And in response, the surface of these tissues becomes more keratinized (their cells experience a build-up of keratin, a fibrous protein).

This keratinization effect serves to “toughen up” the skin’s surface, which makes it a more effective barrier to antigen entry. When tobacco use is ceased, the source of the irritation is removed and the skin’s surface reverts back to more normal (more penetrable) conditions.

Tobacco contains the compound nicotine. And when it’s present, it inhibits the release of Tumor Necrosis Factor-alpha (TNF-alpha) and other chemical mediators that play a role in a person’s immune system response that leads to canker sore formation.

Some sources suggest nicotine replacement therapy should be considered as a treatment remedy for canker sore sufferers who have terminated their use of tobacco products.

Many people find that their canker sores coincide with periods of emotional stress. Even the routine psychological fluctuations we experience on a daily basis in coping with minor events and changes can be enough to cause a person’s outbreaks.

As corroborating evidence for this observation, it’s reported that patients who have psychological disorders tend to have a higher incidence rate of experiencing aphthous ulcers. So do people who have genetic conditions that cause increased anxiety traits.

It’s not so clear how this factor helps to trigger the immune system response that causes a person’s canker sores.

A paper by Preeti suggests that stressed individuals may simply be more prone to performing parafunctional habits, like biting the inside of their cheeks or lips. And it’s this injury, in turn, that then leads to canker formation.

Canker sore outbreaks may be associated with nutritional deficiencies. Some of the vitamins and nutrients thought to be involved are:

It’s very common for people to report that the consumption of various kinds of foods and beverages causes their canker sore outbreaks. Examples include:

It’s generally considered that chemical compounds found in these foods and beverages are themselves the triggering antigen for the immune system response that causes the person’s canker ulcerations.

As a way of understanding what correlations exist for them, it’s suggested that a person should keep a diary where they record the suspect foods they have consumed that day. Then, later on if a canker sore outbreak occurs, they’ll have a record that they can refer back to to help identify specific causative agents.

Some studies suggest that the use of oral care products that contain sodium lauryl sulfate (“SLS”), a foaming agent found in most toothpaste and mouthwash formulations, may place a person at increased risk for canker sore breakouts.

We’ve seen two mechanisms given as an explanation for this effect.

Some papers suggest that SLS has a denaturing (molecular altering) effect on oral tissues. As a result, the skin’s surface provides a less effective barrier to antigen entry.

The other proposed explanation is that the SLS molecule itself is the triggering antigen.

A proposed solution is to stop using oral care products that contain this compound. For more details, see this page:  SLS-free toothpaste.

For women, there may be a relationship between aphthous ulcer formation and certain phases of their menstrual period. It’s also been reported that some women notice fewer sores during pregnancy. Neither of these observations has yet been adequately documented or explained by research.

Neville’s textbook of oral pathology categorizes hormonal changes as an event that can alter the “mucosal barrier.” (Meaning an effect that alters the effectiveness of the surface of oral tissues in creating a barrier that prevents the entry of antigens.)

Data suggests that some people may have a genetic predisposition for experiencing canker sores.

It’s generally thought a person’s genetic makeup influences the manner or aggressiveness with which their immune system reacts to the presence of the antigens that cause canker sore formation. (The person has an increased innate susceptibility to the development of canker sores.)

The current thought is that bacteria are not a causative agent for canker sores but instead, it’s some chemical compound associated with their presence and/or the infections they cause.

Some viruses may cause aphthous ulcer formation.

It’s considered that virus particles or chemical compounds associated with bacteria play the role of the antigens that trigger the immune response that causes canker sore formation.

Several medical conditions have been reported to show a correlation with canker sore formation (and other forms of aphthous ulcers as well). This finding suggests that people who experience persistent difficulties with mouth ulcers should consider the possibility that an underlying undiagnosed systemic condition exists.

The nature of the answer needed here lies far beyond the scope of this page.

The use of nonsteroidal anti-inflammatory medications (NSAIDs), beta-blockers, chemotherapeutic agents, and the compound nicorandil have all been suggested as being risk factors for canker sore outbreaks.

It’s the medicine’s chemical compound itself that is thought to be the triggering antigen for the immune response that causes canker sore formation.

L) Are they contagious?

No, canker sores are neither contagious nor infectious. We explain why on this page: Why aphthous ulcers are not contagious.

When do most outbreaks occur?

There may be a seasonal tendency for canker sore outbreaks. If there is, it seems that people tend to suffer from them more during the summer months.

What we did was evaluate Google search volume for the keywords “canker sores” over a 5-year period.

The chart we created from that data shows that web searches tend to rise into and subsequently top out during the summer months (August into September). They then fall off, reaching a low point in December and into January. 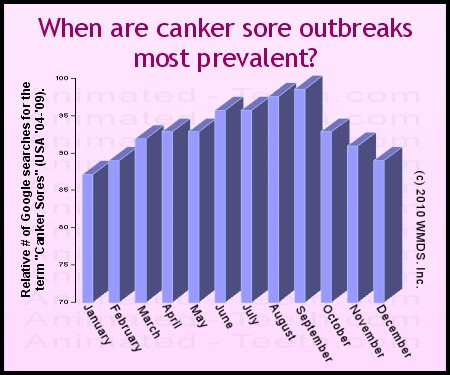 As you can see below, a similar analysis involving the term “mouth ulcers” seems to show the same seasonal bias.

(Aphthous ulcers are the most common type of recurring mouth ulcer. And for those who initially don’t know what type of lesion they do have, the generic term “mouth ulcers” seems a logical choice to use for an initial search.) 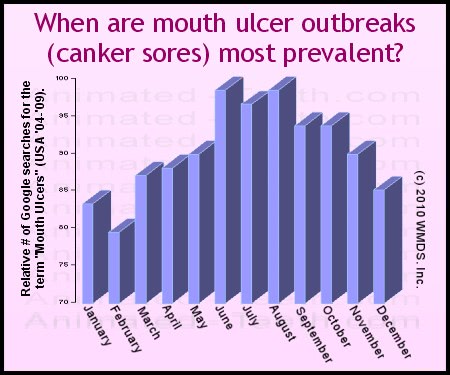 We aren’t trying to pass our simple study off as hard and proven facts. But what it shows is interesting.

In regard to an explanation, one risk factor for outbreaks is allergies to food, including fruits and vegetables. The increased availability of these items during the summer months might explain the seasonal effect demonstrated above.