Biologically, why do these ulcerations develop? | What takes place at the cellular level and why? – (It’s an immune system response.)

The biology of aphthous sore formation.

If you’re someone who suffers from canker sores, you may wonder why they form. What is the process that takes place at a cellular level that causes your body to react to the point that these ulcerations develop?

To answer this question, in as light of a scientific discussion as possible, this page covers the prevailing theory that’s used to explain canker sore formation and development. (As you’ll find out, these sores are a result of an immune system response.)

And then, to wrap this page up, we discuss how knowing these details explains a lot of the mystery and quirks associated with what a person experiences when their canker sores occur.

At a biological level, what causes canker sores to form?

While the full mechanism of aphthous ulcer formation is not been precisely determined, the current predominating theory states that it’s due to the response of a person’s own immune system to what can be a wide range of different triggering agents or events.

1) The immune response is initiated by the presence of some kind of antigen.

Antigens are any substance that when detected by a person’s immune system stimulates it to produce a response. In most cases, antigen molecules are proteins but can also be polysaccharides, lipids, or nucleic acids.

In the case of aphthous ulcers, some common sources of antigen molecules are foods, medications, chemical compounds, infectious agents (like bacteria and viruses, or more likely chemical compounds associated with their presence).

So, the whole process of aphthous ulcer formation begins when your body’s immune system first detects the presence of a “foreign” molecule of some sort (the antigen) in the tissues where your canker sore will form.

2) Once the antigen has been recognized, the process that leads to canker sore formation begins.

With aphthous ulcer development, the defensive action that the person’s immune system responds with involves the attraction of various types of white blood cells (neutrophils, lymphocytes, macrophages, mast cells, etc…) to the tissues where the antigens have been detected.

These cells and the compounds they produce then challenge the offending antigens in an attempt to eradicate them.

3) The inflammation reaction that’s been initiated results in tissue destruction.

A characteristic of the immune response that leads to canker sore formation is that an inflammatory mediator (chemical) named TNF-alpha is involved.

The presence of TNF-alpha triggers neutrophils (another kind of white blood cell that’s been drawn to the site of the antigens) to release mediators (chemical compounds) that cause tissue destruction. The result of this carnage is the ulceration that forms.

4) So, there you have it. Biologically, that’s why canker sores form.

Once an offending antigen has been identified, a cell-mediated (white blood cells) immune system response is begun that leads to a win-at-all-costs outcome that results in the formation of an ulceration (a canker sore).

In your immune system’s zeal to eradicate what it interprets as an invading compound, it destroys both the detected antigens and the tissue in which they resided (a compromise between preserving tissue integrity yet eradicating the invading substance). The carnage that results is the aphthous ulceration you experience.

This mechanism explains a lot about what you see during the stages of canker sore formation.

Something we haven’t mentioned yet is that your body’s immune system response (the process described above) starts off in the basal layer of the skin and then progresses up to its superficial (surface) layers.

And what would be expected with this type of disease process progression coincides precisely with what’s seen during stages of canker sore formation.

Here’s how what’s seen and experienced during some of the early stages of canker sore formation can be readily explained by events taking place at a cellular level during aspects of the immune system response.

This period characteristically displays no obvious tissue changes but a tingling/itching/burning sensation may be felt.

Biologically – This can be explained by the fact that while started, the response that’s begun is minor enough and deep enough within the skin tissue that no changes are visible.

A canker sore’s characteristic ulceration and red halo are explained by the events that take place at a cellular level. 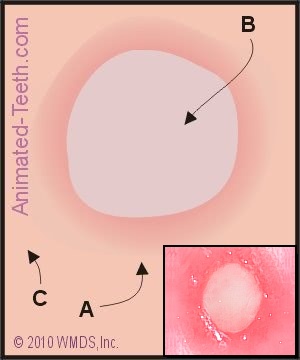 For the legend to this graphic see our page: How to identify canker sores.

During this time period, the affected area becomes reddened and slightly elevated.
Biologically – Two characteristic signs of inflammation are redness (due to vasodilation and increased blood flow to the area) and the influx of fluids and white blood cells to the area (which causes tissue swelling).
So, these are signs that the immune system’s response, while localized and limited in size, is starting to ramp up.

At this point, the canker sore has transformed into a fully-formed lesion. Visually, it appears as a sunken ulcerated region (labeled “B” in our diagram) surrounded by tissue having a reddish halo (labeled “A” in our diagram).

Biologically – The formation of the ulcer is due to the tissue destruction that the immune system’s response has triggered. The red halo that surrounds the sore is evidence of increased circulation characteristically associated with inflammation reactions and the presence of extravasated red blood cells (blood cells that have leaked out of their vessels into surrounding skin tissues).

The fact that the formation of canker sores is due to an immune system response explains a lot about outbreak triggers.

This diversity is easily explained as part of an immune system mechanism.

The fact that it’s the detection of antigens in oral tissues that sets off an immune response that results in canker sore formation makes it easy to understand how such a wide range of outbreak triggers can result in the formation of the exact same type of lesion.

Canker sore triggers can generally be interpreted as falling within at least one of the following three categories, each of which affects the antigen/immune system relationship. Here are some simple examples:

So, when attempting to understand your own experiences, keep this list in mind.