– Are cold sores contagious? / How is the herpes virus spread? / When is transmission most likely?

Cold sores (fever blisters) are usually distinguished from other types of mouth sores by way of evaluating:

(Scroll on down this page for pictures and details.)

The appearance of a cold sore (fever blister) will gradually change as it progresses through the five stages of formation outlined below.

The timeline for this transformation (from the first sign to complete healing) usually lasts between 8 and 12 days.

FYI: The stage of your sore correlates with its level of contagiousness.

In most cases, a person’s first indication that they have a cold sore starting to form is that they notice a new sensation (burning, stinging, itching, soreness, tautness, or swelling) in the area where the lesion will ultimately appear.

What to look for – The area may become reddened, and slightly raised or elevated (papule formation).

Things to know – All of these initial symptoms are signs of inflammation. (Your body’s response to the herpes virus and the tissue damage it’s starting to cause.)

The first readily visible sign of cold sore formation is the appearance of multiple fluid-filled blisters.
What to look for – The blisters are usually very tiny (smaller across than the thickness of a dime). And form in a cluster that’s no larger than about the size of a nickel. In some cases, individual blisters may join together to form a single larger one.

Things to know – This is the stage where the total number herpes virions (virus particles, HSV) is the greatest. The overall size of the forming lesion generally correlates with the relative number of virions present. (Hull)

In about 25% of cases, the herpes infection is brought under control (either just by your body’s immune system or with the help of antiviral medication Details) before blisters can develop. Since no blisters or following ulceration form, these are sometimes referred to as “failed” or “aborted” lesions. (Opstelten)

The blisters usually rupture soon after they’ve appeared. As they do, they release a clear fluid teeming with herpes virions. After all have broken, the sore transforms into an area of ulceration.

What to look for – Immediately after blister rupture, the lesion starts off as a shallow red ulcer (a wet, raw-looking sore) whose surface then turns grey.

Things to know – This phase of fever blister formation can be the most painful stage, and the one during which it’s most contagious.

By this point, the replication rate of the virus has passed its peak. And the inflammation reaction triggered by the presence of the virions and damage to skin cells they have caused is in full swing as it continues to clean up the carnage. It’s this inflammation response (a part of the normal healing process) that’s responsible for redness, swelling and tenderness associated with cold sores as they continue through their stages.

If the ulcer has formed in a location where it’s not kept wet by moisture from the mouth, it will scab over.

What to look for – The scabbing looks like a yellow, or dark red to brownish, crust. It often cracks or breaks, which results in bleeding.

During times when a scab has come off, you can see the amount of ulceration that still remains and the pink, newly formed tissue that surrounds it.

Things to know – The formation of the scab is often accompanied by an itching or burning sensation. Moisturizing the scab Details can help to prevent this.

As time progresses, so will the sore’s healing.

What to look for – A series of scabs will usually form on the lesion with each one flaking off before it’s replaced by a new one.

Each new scab will be smaller than the previous one, until finally the lesion resolves fully and in most cases without scarring.

B) Where do cold sores form?

Cold sores form either:
Cold sores typically form in the same general location as they have during previous outbreaks. Here’s why.

This is an important characteristic that aids in the identification of recurring facial lesions as cold sores.

Yes, during times when you have a cold sore, your potential for spreading the herpes virus should be one of your concerns.

Contact with your sore, or the fluids coming from it, or even your own infected saliva can transfer herpes virions to others, or even other parts of your own body (see below).

It’s generally considered that the dominant transmission route of the herpes simplex virus involves making direct contact with the infected individual, usually via one of the following events.

b) Via an intermediary.

The oral pathology textbook by Regezi states: “the spread of infection through airborne
droplets, contaminated water, or contact with inanimate objects is generally undocumented.” (Our research of this subject ran across numerous studies stemming from the 1980s and 1990s that in their day had postulated these as transmission routes.)

This same opinion seems to be supported by the other reference sources we’ve used for this page, all of which portray the dominant route of transmission of oral herpes as being either infected saliva or contact with active lesions, as opposed to intermediary objects.

A paper by Ayoub mentions the transmission of HSV 1 via shared eating habits (both utensils and food). One would have to assume that this type of activity is just another way of generating contact with an infected person’s saliva (and therefore the virions it contains). In light of this, other activities that create this same potential should be kept in mind and avoided.

2) Transfer to other body parts. 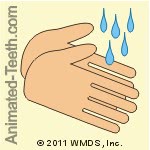 Always wash your hands after touching a cold sore.

Besides just infections associated with the mouth, it’s important to be aware of the fact that the herpes virus can also cause infections in other body locations too. (This doesn’t just apply to other people but also includes your own body.)

When are cold sores the most contagious?

Virus particles are present during all stages of cold sore formation. And for that reason, each and every stage should be considered to be contagious.

a) Wet lesions are the worst.

The most contagious stage of a cold sore is when its blisters rupture (the Weeping stage). This is because the liquid contained in these blisters holds literally millions of herpes simplex virions.

b) Scabbed lesions, less so.

Some people are at greater risk for herpetic infections and associated complications than others. And for this reason, they should be given special consideration.

This includes people with immature immune systems (newborn babies) or compromised ones (such as chemotherapy or HIV patients).

All of the basic precautions used to prevent the spread of the herpes virus need to be vigilantly practiced when these types of individuals are involved. Parents/caretakers need to establish rules about what type of contact is allowed with those in their charge.

Herpes infections involving newborn children can be a serious matter, with possibly multiple organ systems being affected, and even risk of the infection causing death.

In the vast majority of cases (90%), the virus is passed to the child from their mother during delivery (whether or not she currently has any signs or symptoms of infection). Fortunately, a newborn’s risk of experiencing a herpetic infection is a low-percentage event (involving far less than 1% of newborns), and usually a manageable condition when treated (however 60% of untreated cases result in death).

In about 10% of the less than 1% of cases that do occur (making this a rare-but-possible scenario), the newborn’s resulting infection is a result of virus particles spread from another individual (sibling, grandparent, etc…), like during a kiss or other activity that brings the child into contact with the infected person’s lesion or saliva.

Rettner R. Deadly Kiss: Can a Baby Contract a Lethal Virus from a Cold Sore?