The Invisalign® Cleaning System (Cleaning Crystals) – Do you need to use it?

– Effectiveness – What does research document about this product’s use? | Can you just use it alone? | Best practices.

How important is it to use the Invisalign® Cleaning System?

If you wear Invisalign® aligners, you have no doubt heard about their Cleaning System and its packets of “Cleaning Crystals.” And most likely related to its cost (each packet costs around a dollar), you may wonder how important it is to use this product to clean your aligners.

We’ve turned to published research for an answer.

As coverage of this question, we’ve ended up creating two separate pages:

What are important factors to consider?

Different than you might expect, there are actually several different issues that must be weighed when evaluating an aligner cleaning method. They include:

Fortunately, there have been a few published studies that have investigated these issues, and specifically as they apply to the use of Invisalign’s® Cleaning Crystals and possible alternatives.

Research – How effective are Invisalign’s® crystals in disinfecting your aligners?

Title: Scanning electron microscopy analysis of the growth of dental plaque on the surfaces of removable orthodontic aligners after the use of different cleaning methods.

This author has published two studies that have evaluated the effectiveness of the Invisalign® Cleaning System in regard to its ability to sanitize aligners.

The appliances were then evaluated via an electron microscope to determine what level of bacterial colonization remained after each of the cleaning routines had been performed. 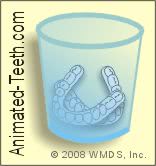 One way to clean Invisalign® aligners is by soaking them.

Brushing is needed too.

Discussion in this paper elaborated on the fact that studies have generally shown that the most effective methods for cleaning dental appliances (of all types) typically involve a combination of mechanical (brushing) and chemical (soaking) processes. And suggested that its findings corroborate this point. (We report on the need for this two-phase approach with denture cleaning here. Brushing plus soaking.)

What we found curious about this study.

We couldn’t help but notice that this study did not evaluate the effectiveness of just using the Invisalign® crystals on their own. (Just soaking the aligners, without any brushing.)

Based on the paper’s discussion about the importance of mechanical cleansing (brushing) in creating effective dental appliance cleansing, one might presume that they never considered that that protocol would be an effective option. But that is just our conjecture.

Title: ATP Bioluminometers Analysis on the Surfaces of Removable Orthodontic Aligners after the Use of Different Cleaning Methods.

This study (whose lead author was the same as the study above) was set up in a similar fashion as the one just discussed. The primary difference between the two was the way in which the level of bacteria remaining on the aligners was detected. (This one used bioluminometry.)

More about the Invisalign® experience.

Similar to the first paper, this second study stated that:

In contrast to the two Levrini studies, this one didn’t report such positive results for the use of the crystals. It determined that “this solution has no antibacterial effect against the tested bacteria.”

► Our conclusions about the need to use the Invisalign® Cleaning System.

The disparate findings of these studies make it difficult to know how much emphasis should be placed on the use of Invisalign’s® crystals. It might be stated that:

We would suggest that …

We think that it’s important to state that there are issues and concerns associated with the practice of aligner brushing that are important to consider, especially when toothpaste is used.

We’ve dedicated an entire page to this issue: Aligner brushing as a primary cleaning method. Directions. In our opinion, this is a must-read.

Our affiliate links can be used to shop  Invisalign® cleaning products/units  on  Amazon.com  or  Walmart.com

What shouldn’t a cleaning method do?

It may not have crossed your mind but there are some very important things that an aligner cleaning method should not do. They include:

Since using the Invisalign’s® Cleaning System is the recommended product, one might assume that the use of this cleanser doesn’t affect aligner plastics at all.

From a practical standpoint, that stance seems to be true enough. But as we discuss below, that’s not entirely what research suggests.

Research – What effects does the Invisalign® Cleaning System have on aligner plastics?

What type of plastic are Invisalign® aligners made from?

Obviously, to understand the effects that a cleaning method may have on Invisalign® aligners, this is a vital piece of information to know.

Generally, this is proprietary information held by the company. But the Material Safety Data Sheet for their Smarttrack® plastic (the material currently used) states that it’s composition is multilayered “thermoplastic polyurethane / copolyester.”

What research information is available?

We found published studies that investigated the use of cleaning solutions, including Invisalign’s® Cleaning Crystals, with both polyurethane and separately copolyester test samples.

In our reporting here, we’re making the assumption that known effects with either of these component plastics would have the potential to similarly affect Invisalign’s® multi-layered plastic.

This study was designed to investigate the effects of 8 cleaning methods on copolyester plastic. (One of the components of the plastic material used for Invisalign® aligners.)

The use of these cleansers was evaluated over a 6-month time frame of twice-weekly use. (48 exposures to the soaking solution.)

The plastic samples were evaluated for changes in:

It was determined that the long-term use of the Invisalign® Cleaning system:

This study involved many of the same investigators that conducted the Wible study, and was set up in a very similar fashion (although only 7 cleaning solutions were investigated).

A primary difference between the two studies was that this one evaluated the effects of the cleaning solutions on polyurethane plastic. (The other of the two types of plastic used for Invisalign® aligners.)

In a nutshell, the findings of this study were very similar to the one just discussed. It found that the use of the Invisalign® Cleaning System (over a 6-month period of twice-weekly use):

► Our conclusions about what these studies suggest.

► Our conclusions about choosing to use the Invisalign® Cleaning System.

Based on the information and discussion found on this page, we think that it’s justified to conclude that:

As further reading on the subject of aligner cleaning …

Levrini L, et al. ATP Bioluminometers Analysis on the Surfaces of Removable Orthodontic Aligners after the Use of Different Cleaning Methods.

Levrini L, et al. Scanning electron microscopy analysis of the growth of dental plaque on the surfaces of removable orthodontic aligners after the use of different cleaning methods.