Once your dentist has finished straightening your teeth, the retention phase of your treatment will need to begin.

During this phase you will be required to wear some type of dental retainers (which at least in theory may Probably should. last the remainder of your life). This is true no matter what kind of braces or orthodontic system The common options. was used.

Without proper retention, orthodontic relapse (the return of features of your original malocclusion) is likely to occur.

There are generally two kinds of dental retainers, Removable and Fixed.

And just as their names imply, they differ by way of the fact that one type is permanently attached (bonded) to your teeth whereas the other is just worn according to your dentist’s directions. Common instruction sets.

There’s no single best type for everyone.

You’ll need to quiz your dentist about which of these types of appliances they’ll consider for use with your case. And then the specific advantages and disadvantages each one offers your situation.

Listen seriously to what your orthodontist has to say in regard to their recommendations. Remember, they’ve just completed providing you with months to years of treatment. And as a result, they’ll no doubt have a founded opinion about how suited each type of appliance is to your situation. And also about which type you’ll be most likely to comply with (wear as instructed).

This latter point is an astoundingly important one because after all, it’s only the wear of your retainers that can ensure the successful outcome of your orthodontic work over the remainder of your life.

You may wear more than one kind of appliance.

Other terms used to refer to “permanent” appliances are “bonded” or “fixed” retainers. That’s because they’re attached directly to your teeth. They cannot be removed. 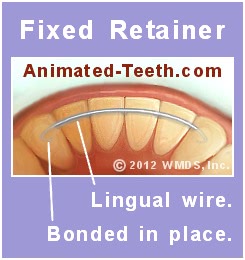 Fixed retainers were first introduced in the 1970s. This was an era when many new applications for the science of dental bonding were introduced.

How long is a fixed retainer left in place?

Unless there are reasons why it should be removed (see below), bonded retainers are typically left in place indefinitely. One study (Booth) found that this type of appliance is capable of providing acceptable service in excess of 20 years.

Advantages and disadvantages of permanent retainers.

Research suggests that a fixed retainer is better able to hold a patient’s lower front teeth (incisors) in position during the first months immediately following the completion of their active orthodontic treatment.

2) Fixed retainers make it harder to clean your teeth.

The biggest disadvantage of bonded retainers is that they make it more difficult for the patient to brush and especially floss.
Study – Cleaning difficulty. – A study by Sawhney polled subjects who wore different types of orthodontic retainers. One question asked was how difficult it was to maintain oral hygiene.

Study – Gum inflammation. – In situations where proper maintenance isn’t performed, dental plaque and tartar will tend to accumulate in the region of the retainer and this may place the person at greater risk for complications such as gum disease.

But don’t interpret this study as suggesting that this issue is never a problem, it just shows that it isn’t always. For people for whom it is, their appliance should be removed and another form of retention used.

Floss threaders. – Effective flossing around a bonded retainer typically requires the use of a floss “threader.” This device allows the user to work the floss underneath their wire, so they can floss the portion of their teeth in that region. (More details about cleaning around fixed retainers. How to.)

3) With permanent appliances, compliance is never a concern.

The great advantage of bonded retainers is that the dentist does not have to rely on patient cooperation. Unlike removable retainers that may be misplaced or simply not worn, fixed appliances are always in place to perform their duty.

4) The retainer can’t be seen.

Another nice advantage of permanent retainers is that due to their location on the backside of the teeth it’s very difficult for others to detect them.

In most cases, they can be considered to be the most esthetic type of retainer.

Unlike removable retainers that may, bonded appliances usually don’t affect a person’s speech.

Our affiliate links can be used to shop  orthodontic retainers and accessories  on  Amazon.com  or  Walmart.com

Innovative solutions and devices for the routine and emergency issues that retainer wearers encounter.

There are two basic categories of removable dental retainers. They are the Essix and Hawley appliances. As discussed below, each type offers its own specific advantages and disadvantages.

These are vacuum-formed appliances that are relatively simple to make. Many dentists fabricate them right in their own office. 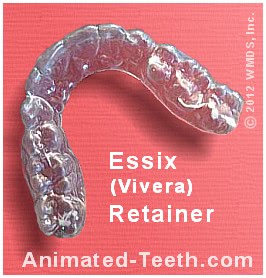 These retainers look very similar to Invisalign® aligners. Specifications | Examples But instead of being changed every few weeks, they are worn indefinitely (per your dentist’s instructions).

For Invisalign® patients, the use of Essix retainers may seem the logical choice since they are already familiar with wearing this type of appliance. And in fact, Align Technology, Inc. (the maker of the Invisalign® system), manufactures its own version of the Essix appliance called Vivera® retainers. 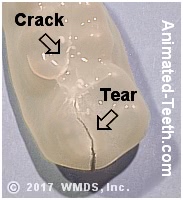 Hawley appliances are the granddaddy of retainers. They were first introduced in the 1920s. And even today they are the most used type of retainer for upper teeth. (Valiathan) 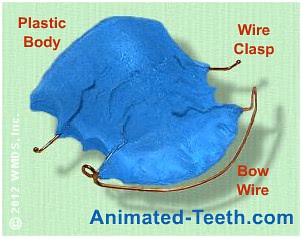 Hawley retainers have a design that involves wires and clasps anchored in a relatively thick plastic body. The plastic aspect covers over the roof of the patient’s mouth or else lies along the tongue side of their lower teeth.

The clasps grasp around selected teeth so the retainer is anchored securely. The retaining “bow” wire runs across the front side of the teeth and maintains their alignment.

The most noticeable feature of a Hawley retainer is the bow wire that runs across the front side the the patient’s teeth. The plastic body remains well hidden. Sometimes it’s constructed using plastic that has bold colors or a personalized design. 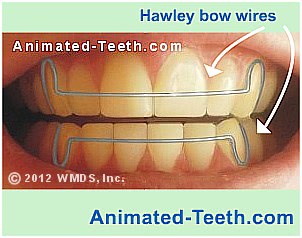 The bow wires of Hawley appliances are quite obvious.

Besides the specific factors outlined above for each individual type of appliance, there are some general issues associated with removable retainers that should be considered.

a) Their biggest advantage is also a disadvantage.

Just as their name implies, removable retainers can be taken out. You can remove them when you eat, brush and floss, or during those times when wearing them is not required.

The problem is this also means that they can be lost, or simply not worn (dentists call this “poor patient compliance”). And no retainer can perform its intended function if it’s not in place.

However, when they are worn as directed, studies have shown that the part-time wear of removable retainers is as effective as full-time wear (of removable or fixed appliances). (Meade)

b) Removable appliances may cause excessive salivation.

Wearing anything in your mouth may trick it into producing extra saliva.

That’s because, to our bodies, having something in our mouth is usually a sign that a meal is coming. So in response to wearing your retainer, it will start to produce the extra saliva it thinks it will need for the upcoming “meal.”

This isn’t much of a problem for most people. And over time, your body should return to normal as it realizes that the extra saliva isn’t required.

Hawley vs. Essix retainers- Which do most patients prefer?

To give you an idea of how patients seem to feel about wearing these types of appliances, we’ll report the findings of a study by Hichens. This investigation evaluated subjects’ use of Hawley and Essix (vacuum-formed) retainers during the first 6 months following the completion of their orthodontic treatment.

330 patients were involved, broken into roughly equal groups (Hawley vs. Essix). One specific goal of the study was to measure patient satisfaction with the appliance they wore (via the use of a questionnaire). The study’s findings were:

Based on all of these findings, it seems reasonable enough to suggest that patients tend to prefer having Essix-style (vacuum-formed) retainers.

Pratt MC, et al. Evaluation of retention protocols among members of the American Association of Orthodontists in the United States.

Sawhney B. Orthodontice Retainers: A survey of patient satisfaction and compliance.

Amazing site — esp. Inivisalign and retainer section. Am looking to learn more about the interaction between mouth guards for grinding and retainer for straightening. I have teeth grinding and need a mouth guard, and after learning via this site, I will need a retainer to keep my teeth straight. These are two needs from conflicting tools. I read the retainer is thinner and for alignment and the guard is is thicker and for grinding. Can the two be combined? Will I be a poor soul who has to wear a retainer for years during the day because I need to wear a mouth guard at night?

The type of retainer you anticipate getting is termed an Essix-style retainer (discussed above). And yes, compared to the construction of a nightguard whose purpose is to protect against bruxism (teeth grinding), the thickness of its plastic is much thinner.

Usually, if just one Essix retainer is worn (like just on your upper teeth), a person with a bruxing habit will grind through it quickly. (teeth vs. plastic)

But if you wear both an upper and lower Essix retainer, the amount of wear that takes place (plastic vs. plastic) is often just minimal and can provide a very successful outcome.

There are some technical reasons why this might not be the right solution for all cases. But I personally have worn this configuration for over a decade, very successfully. I’ve never worn through an Essix retainer.

As another solution, regular dental plastics bond to some of the types of plastics used to make Essix retainers. So it might be possible for your dentist to thicken up the chewing surface of your retainers with plastic so they can withstand grinding activity better.

And yet another solution would be to use a regular nightguard as the retainer for the upper teeth (the only requirement is that the appliance holds all of your teeth on that arch in place). Then on the lower arch, your dentist might place a fixed lingual wire (discussed above on this page).