– How much, how often and how long do you wear your aligners? | How many sets of aligners are worn? | How long does treatment take?

Before you decide to commit to Invisalign® treatment, you’ll no doubt want to know details about the general timeline of the process itself. This page answers those types of questions.

A) How much / how often do you wear Invisalign® tooth aligners?

1) You’ll need to keep your aligners in all of the time.

You’ll be expected to wear your Invisalign® aligners pretty much around the clock. The only exceptions being when you’re eating foods, drinking beverages, smoking or cleaning your teeth and aligners.

How many hours each day, minimum?

For most people, around the clock wear should translate to somewhere between 20 to 22 hours per day, with your dentist no doubt leaning toward the latter number.

And as insufferable as that may seem, just remember that with other types of braces you’re shackled to them 24 hours a day, so consider the 2 hours or so of respite you’re allowed each day to be the giant advantage that it is.

2) You can remove your aligners for special occasions.

You can take your aligners out for special events. This might include activities where you’ll be speaking in a public setting. Or times when you’ll have close social interactions with people and it would be embarrassing for you to have your aligners detected.

c) Not wearing your aligners enough is a big deal.

Even though you can take your appliances out whenever you want, if you do so without a good reason you’re not doing yourself any favors.

d) Things you can do to help things along.

You might envision that just wearing your aligners is all you need to do. And to a great extent that is correct.

But by paying a little bit of attention to how things are progressing in terms of aligner fit, you can help to ensure that your case is kept on track by confirming that each set of appliances has accomplished their intended task.

What to look for.

The end goal of wearing each set of aligners is that your teeth have shifted to the point where they fit fully and comfortably into them (there are no significant pressure points). This is proof that the alignment of both matches. Toward reaching this goal:

a) How long do you wear each set of aligners?

In most cases, Invisalign® aligners are worn on the order of two weeks. But there can be situations where they need to be worn longer.

The general idea is that you’ll wear each set until that point where your teeth fit fully into them comfortably and relatively loosely.

Our affiliate links can be used to shop  Invisalign accessories  on  Amazon.com  or  Walmart.com

Innovative devices and solutions for the issues Invisalign® wearers encounter.

b) How often are checkups?

Since they’ll need to monitor your progress to make sure that everything is going as planned, your dentist will schedule you for checkup appointments every four to six weeks.

At each checkup, your dentist will send extra sets of aligners home with you.

Based on the standard intervals given above, at each appointment your dentist will need to give you at least one or two additional sets of aligners to take home. They’ll also need to give you specific instructions about when to start wearing them.

What takes place during checkup appointments?

In most cases, you can expect that each checkup appointment will be fairly short. It may just involve your dentist looking at your teeth and making notes. However, at times it may also need to include some type of minor dental procedure. 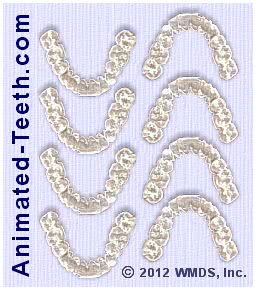 c) How many sets of aligners will you end up wearing?

The exact number of aligners required will vary with each person’s case. This number is, however, something that’s determined when the patient’s treatment is initially planned The treatment-simulation stage.
So, if you’re interested, just ask your dentist. They’ll know precisely how many sets will be involved.

How many are usually worn?

“Sets” may not really be the correct term.

On our pages, we usually refer to Invisalign® aligners as being used in “sets.” The idea being that one aligner is worn on the upper teeth and another on the bottom, and then these aligners are replaced by new aligners at the same time.

Invisalign® aligners should never be thrown away without your dentist’s permission.

Even though your aligners are usually just worn for a few weeks, you shouldn’t throw any of them away without getting an OK from your dentist first.

If a situation develops where your treatment begins to veer off track, your dentist may have your stop wearing your current set of aligners and go back and re-wear some of your previous ones.

d) How long will your Invisalign® treatment take?

For the most part, an Invisalign® case will generally take about the same amount of time as when conventional braces (brackets and wires) are used. Some published reports suggest that the time needed may be less. You’ll simply have to ask your orthodontist what their experience has been with cases like yours.

Most Invisalign® cases take about a year.

Align Technology, Inc. (the people who make Invisalign®) suggests that, on average, cases are completed in about 12 months.

Since the treatment time frame for conventional braces is usually between twelve to twenty-four months, that estimate may be evidence that removable aligners are best suited for relatively less involved orthodontic cases. Invisalign® limitations. Ones that can be completed in relatively shorter time frames.

Want to know how long your treatment will take? – Just do the math.

It’s easy enough to calculate how many months your case should take.

Of course, based on your case’s computer simulation ClinCheck® animation. your dentist knows precisely how many sets, and how much time, will be needed even before your aligners are made. And this really is an advantage over conventional braces where the treatment estimate that’s given is much less precise.

Another method: Take a look at your most crooked (“lead”) tooth.

With any patient’s case, there is a “lead” tooth. This is the one that needs to be moved the most (either in terms of linear distance or amount of rotation needed, or both).

A single Invisalign® aligner is typically used to create at most about .25mm of movement (roughly 1/100th of an inch) or about 2 degrees of rotation. So, the lead tooth dictates how many individual aligners will be needed.

Of course, you probably don’t have the capability to make this measurement. But, FYI, it is what everything is based on.


e) You’ll need to wear retainers after your Invisalign® treatment is finished.

Essix and Hawley appliances are the most frequently used removable retainers.

When making a decision to have your teeth straightened, don’t overlook the fact that you’ll need to commit to wearing dental retainers after everything has been completed.

The chance of alignment relapse after Invisalign® (or any other type of orthodontic treatment) is substantial and even likely unless retainers are worn as directed by your dentist.