– When and why it forms. | What does fluorosis look like? Pictures- snow capping (mild), mottling, brown (severe). | What dental treatments can be used to correct fluorosis? – teeth whitening, microabrasion, resin infiltration, restoration placement.

What is dental fluorosis?

What causes these changes?

The way fluorosis affects the appearance of a tooth has to do with the ways it has altered the composition of its enamel (reduced level of mineralization, increased porosity, increased fluoride content).

These changes affect both the color of the enamel and how it handles light (its degree of translucency), and possibly even its surface texture. 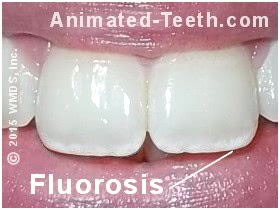 This type of fluorosis pattern is referred to as “snow capping.”

The vast majority of cases of fluorosis in the United States fall under the classification of slight to mild. 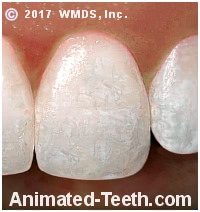 Extensive fluorosis staining is referred to as tooth mottling.

b) Moderate to severe cases.

When more frequent, more prolonged and/or possible higher systemic fluoride exposure has occurred, the resulting fluorosis can be expected to be more severe. With these cases:

The areas that are most affected have brown discoloration.

Streaks of fluorosis frequently have formed during the same time period.

c) Bilateral symmetry is the norm.

It’s characteristic that the staining pattern of fluorosis that’s seen is at least somewhat bilaterally symmetrical. (Meaning it has affected the same teeth, and usually even the same general tooth locations, on both the left and right side of the person’s mouth).

The explanation lies in the fact that the affected areas on matching pairs of teeth (left/right central incisors, lateral incisors, eyeteeth, etc…) were all at the same point of enamel formation when the exposure to the fluoride took place (see illustration).

However, the region of stain on different types of teeth can be expected to lie at different levels. That’s because at any point in time, some kinds of teeth are further along in their development (more fully formed) than others.

How severe can a child’s fluorosis be expected to be?

The extent to which fluorosis has affected any one child’s teeth will vary, according to a number of variables.

With cases where only minimal evidence of fluorosis is evident, no treatment is required if the person considers the appearance of their teeth acceptable. The integrity of the affected areas of enamel is seldom a concern.

b) Moderate and Severe cases.

In situations where the lesions caused by fluorosis are readily apparent and objectionable to the patient, a repair can be made by placing a dental filling (bonding), veneer or crown. Which type of restoration is deemed the most appropriate will simply need to be determined by the treating dentist.

A major drawback of having any type of restoration placed (bonding, veneer or crown) is that at some point in time it will ultimately require replacement.

This would be especially true for restorations placed relatively early in a person’s life, and those whose cosmetic appearance is of utmost importance. Restorations used to correct fluorosis would tend to fit both of these criteria.

You may have some minimally-invasive treatment options.

Your dentist may be able to offer one or a combination of the following “minimally invasive” procedures as a solution for your case. This term, or its synonym “conservative,” applies because compared to performing other procedures the tooth itself is little changed.

Advantages – The idea here is that nothing requires less maintenance over the long-term than a sound healthy tooth. So if your tooth with fluorosis meets that criteria, and its appearance can be corrected conservatively, then by far doing so makes the best treatment plan, not placing some type of restoration.

Disadvantages – As we discuss below, what sometimes comes with comparatively less invasive options is an outcome that’s less perfect. Or it may not be possible to know the treatment’s outcome beforehand. In either case, after undergoing the procedure you may still decide that restorations are needed to ultimately get the esthetic outcome you desire.

That’s not to say that conservative treatments never give a perfect result, because sometimes they do. You’ll simply have to rely on what your dentist tells you they feel is possible.

But for some people choosing one of these approaches is a compromise that’s selected because the value of a minimally altered tooth is understood and is important to them. And in light of that, a significantly improved, as opposed to perfect, cosmetic outcome is perfectly acceptable.

How fluorosis is treated via whitening treatments.

Because the body of the tooth is whiter, the areas of fluorosis staining are less obvious.

This is probably the most frequently used conservative treatment for fluorosis cases.

This method approaches the problem of fluorosis from the standpoint that there’s simply a color mismatch between the affected and unaffected areas of enamel.

Since the affected areas are too white, if the normal areas of enamel can be lightened (using teeth whitening treatments) the mismatch will no longer exist, or at least be as obvious.

Here’s a further explanation about how the whitening process is used for these types of cases: Severe | Mild (you should read both). And we have a digital makeover where we also discuss the use of this technique.
As you can see in our before-and-after photos, up close the results of this method may not seem all that perfect. (For your case, you’ll simply have to ask your dentist what they feel is possible.)

But even at short distances, results like these might be interpreted as quite normal by the eyes of others. And therefore an outcome that’s perfectly acceptable to the patient, especially considering the simplicity with which the transformation was accomplished.

As its name implies, microabrasion technique involves a process where the stained surface of a tooth is abraded off.

Fluorosis blemishes lie in a tooth’s enamel layer. In some cases, the lesion itself may be confined to just a portion of the enamel’s full thickness.

With microabrasion technique, the surface layer of the enamel, and the imperfections it contains, are worn away using an acidic abrasive paste. The whole process isn’t terribly unlike an aggressive form of tooth polishing. (We discuss details about the procedure here.)

The end result is a tooth that’s been returned to its normal appearance, at the expense of some of its enamel thickness.

Probably the biggest problem associated with utilizing microabrasion is that the dentist never really knows for certain how deep in the enamel the fluorosis extends.

Since the dentist will always error on the side of safety (by not removing too much enamel), if the extent of the lesion is deeper than hoped only a partial rather than full resolution will be accomplished. A dental restoration, although a smaller one, may still need to be placed.

But in cases where the use of this technique has provided acceptable results, it offers the perfect solution. The tooth’s appearance has been restored. The amount of enamel it has lost should be inconsequential. No long-term maintenance of any kind is required.

It may be that neither teeth whitening or microabrasion treatments have been (or are expected to be) successful on their own. But using a combination of the two is able to produce acceptable results.

In most cases, the microabrasion procedure will be performed first, then the whitening treatments.

This is a relatively new technique that may offer a conservative solution for mild to moderate fluorosis cases.

Using this procedure, a plastic resin is used to fill in areas of enamel porosity associated with the fluorosis. We discuss this technique’s use here as a repair for a similar type of enamel lesion.

What are the years of greatest concern?

Dental fluorosis only occurs when elevated levels of fluoride are ingested (swallowed) during that time frame when a child’s teeth are developing.

So once the crown portion of a tooth (the enamel-covered part that shows above the gum line) has completed its formation (a process that finishes long before the tooth’s root has completed its development), it’s no longer at risk.

Based on studies that have documented the usual time frames associated with tooth development, the most critical years for the risk of fluorosis lie between the child’s birth and age 6 to 7 years.

The damage isn’t actually visible until later on.

As mentioned above, because fluorosis only forms during that period while the child’s teeth are in the process of forming (and therefore still lie embedded in the jaws), its effects aren’t visible until the affected teeth have finally erupted (broken through the gum line).

Permanent and/or baby teeth may be affected.

Fluorosis forms during tooth development, so any teeth that are forming at the time of the child’s elevated fluoride exposure may be affected. That includes both permanent (adult) and deciduous (baby) teeth.

Since deciduous teeth ultimately exfoliate (fall out), correcting their appearance usually isn’t an issue. But having baby teeth that show signs of staining is often an indication that the child’s permanent teeth will show similar defects too.

Studies have identified four fluoride sources that are commonly associated with a child’s risk for developing fluorosis.

The list above reveals that with the widespread availability of fluoridated products combined with the implementation of municipal programs (water fluoridation infographic), it’s now easier than ever for a child to experience a high level of fluoride intake.

That means every child’s total exposure should be evaluated and monitored. Your dentist is in the best position to help you calculate and calibrate what their exposure/intake is and should be.

! A primary cause of fluorosis is swallowing toothpaste.

a) The underlying problem.

Small children, especially those younger than age 6, characteristically are not able to reliably spit out when brushing.

As a result, they may end up swallowing a large portion of the toothpaste that’s been placed on their brush. And if it contains fluoride, over time enough may be ingested that fluorosis forms.

The following suggestions can help to minimize a child’s risk for fluorosis.

The fluoride content of commercially prepared foods must be monitored.

Bottled juices and juice-flavored drinks can be a source of high levels of fluoride. These products sometimes have a concentration that is significantly higher than the 0.7 ppm (parts per million) considered appropriate and optimal.

Davies RM, et al. The rational use of fluoride toothpaste.

Dean JA, et al. McDonald and Avery’s Dentistry for the Child and Adolescent.

SCHER. Opinion on critical review of any new evidence on the hazard profile, health effects, and human exposure to fluoride and the fluoridating agents of drinking water.