Important pages –How (why) do
cavities form?How long for
cavity formation?White-spot
LesionsCavities
on X-raysMulti-care
ToothpastesFluoride
ToothpastesAll
Pages
All topics.  »All Decay Prevention pages.  »The science of cavity formation.

The science and chemistry of tooth decay (How and why cavities form.)

– An explanation of the tooth demineralization process and the role dietary sugars, dental plaque and oral bacteria (and their acidic waste products) have in causing it.

If you’re curious about the science of tooth decay formation, this page outlines what goes on. It also gives suggestions based on this information that explains steps you can take to prevent cavities from forming in your own mouth.

1) Cavities are caused by tooth “demineralization.”

Decay formation is the result of what dentists refer to as “demineralization.” This is a process that occurs when a tooth is exposed to an acidic environment of pH 5.5 (referred to as the Critical pH) or below.

[The number 5.5 state above is an approximate value that varies with the current conditions in the person’s mouth, such as the level of calcium and phosphate in their saliva. And also the physical characteristics of their tooth enamel (its resistance to decay), which can even vary on a tooth-to-tooth basis.]

The acidic environment damages the tooth’s hard tissues (enamel and dentin) by way of leaching mineral content from them (primarily calcium and phosphate ions). Hence the term “de-mineralization.”

[FYI: Normal conditions for the mouth are neutral (around pH 7). Many of the types of beverages that people routinely drink have a pH that’s well below 5.5, and as such, can contribute to the demineralization process too.]


2) Where do the attacking acids come from?

The acids that cause tooth demineralization tend to be produced by specific types of bacteria, with two of the most prominent types (at least according to historic studies) being streptococci mutans and lactobacilli.

The primary home of these damaging bacteria is within dental plaque:

a) The acids that cause decay are bacterial waste products.

The bacteria that cause cavities are living organisms. And just like all living things, they consume food and in return create waste products.

As it happens, the wastes that these types of bacteria create are very acidic (having a pH of 4 and lower). The primary compound they produce, and the one primarily responsible for tooth demineralization, is lactic acid.

b) What kind of food is involved?

The primary food source for cariogenic (cavity-causing) bacteria is dietary sugars. This includes sucrose (table sugar), glucose, fructose, lactose, maltose and cooked starches.
The bacteria digest these sugars via a process called glycolysis, which is the primary means by which all bacteria create the energy they live on.
What’s different about cariogenic bacteria is that they’re able to take this process one step further, which results in the formation of the very potent compound lactic acid.

c) How quickly does the acid form?

Research by Stephan published in 1944 included a graph that illustrated the pattern of acidic response that takes place in a person’s mouth immediately after their rinsing with a sucrose (table sugar) solution.

The Stephan Curve shows what happens after you eat a sugary treat.

When sugar consumption causes a pH drop of 5.5 or below, decay formation can take place.

Variables that affect the curve.

Each of the factors listed below will influence how intense the attack will be (how quickly and how much acid is produced), and therefore how long the pH of the mouth will remain below 5.5 (the level where demineralization will occur).

Fact – Within minutes of receiving a sugary meal, oral bacteria start to produce the acids that cause tooth decay.

The less sugar you consume, or the fewer number of times you eat sugary foods, or the less time you allow sugars to remain in your mouth, the less exposure your teeth will have to bacterial acids. Toward this goal:

Everyone’s mouth is inhabited by bacteria. In fact, a single human mouth can contain more microorganisms than there are people on planet Earth.

And while you can’t sterilize your mouth, there are things you can do to minimize the impact of bacteria. You do this by preventing them from forming organized colonies.

These bacterial colonies are referred to as “dental plaque,” and keeping it from building up and staying put is what brushing and flossing are all about.

a) Why plaque formation is so problematic.

Dental plaque not only provides a home for bacteria but it also acts as a medium that holds the acid they produce directly against a tooth’s surface.

It’s the acids that leach out underneath dental plaque that cause cavities.

Take a look at our diagram. When acid production is active (like after a sugary treat), the acid that’s formed can seep out of the plaque in one of two directions.

b) Some of the acids get neutralized.

Any of the acidic waste products that seep out into the mouth won’t be able to cause decay. That’s because they’ll immediately get diluted, buffered, and/or washed away by saliva or any foods and beverages that are consumed.

c) It’s the acid underneath the plaque that causes cavities.

The acid that’s most instrumental in causing demineralization is that which seeps through the plaque and on down to the tooth’s surface.

The thickness of the dental plaque above tends to act as a protective covering that helps to shield the acid from dilution, buffering, or being washed away. Over time, saliva will finally penetrate through the dental plaque and begin to create its neutralizing effect. But this can take as long as two hours or more.

That means the acid that finds its way to the tooth’s surface will remain relatively concentrated for an extended period. During this time, demineralization will take place.

Fact – Decay occurs in those areas where dental plaque accumulates on a tooth’s surface.

Fact – 1) Acid formation, and therefore tooth demineralization, begins within minutes of oral bacteria receiving a sugary meal. 2) It can take up to several hours for saliva to penetrate through dental plaque and neutralize these acids.

Brush and floss promptly after eating so to ensure that dental plaque is not present on your teeth.

The amount of tooth damage that occurs after a sugar exposure is in part related to the age of the dental plaque. (Age = How long a particular glob of plaque has been sitting on a particular location on a tooth.)

Factors such as thickness, chemical nature, and the types of bacteria and their organization inside the biofilm (plaque), all correlate with its age and ability to promote the decay process.

Fact – The longer dental plaque has been sitting on a tooth’s surface, the more capable it is of causing tooth damage.

Brush and floss often and effectively. Take the time to be thorough.

There’s more to this story …

You might be surprised to learn that the process of tooth demineralization is only half of the story about how cavities form.

It does explain how and why tooth decay starts and advances. But the whole process of cavity development is more complicated than just that. We explain on our page “How long does it take for a cavity to form?”

Tooth anatomy as it relates to cavity formation.

Every aspect of the outer surface of a tooth is composed of either enamel, dentin or cementum. They are each calcified tissues (they have a high mineral content) and are the ones in which decay forms.

But beyond that, they are very different. Here are information and some interesting facts about them.

The primary hard (calcified) tissues of a tooth.

Dentin makes up the bulk of a tooth. Enamel just covers the surface of the portion lying above the gum line.

When you look at your teeth, most of what’s visible is just those aspects of them that are covered by enamel (this would include everything you see that’s white, and frequently even 100% of what you see at all). (See diagram.)

You’ve probably heard that tooth enamel is the hardest tissue found in the human body and that is true. It’s composed of around 95% minerals.
Most of this mineral content consists of calcium and phosphate ions that have combined to form crystals of hydroxyapatite (hydroxyapatite crystals are the basic building-block element of tooth enamel).

Collectively the crystals are organized into minute enamel “rods” (a tooth will have 5 to 12 million of them). These long, strong rods make up the structure of the enamel itself.

Enamel has some unique characteristics that influence how it is affected by the decay process.

You might be surprised to learn that teeth are not solid enamel. It only makes up the surface layer of a tooth’s “crown” (that portion that lies at and above the gum line).

The bulk of a tooth, both its root and interior aspects, is composed of a light yellow, hard tissue called dentin (see diagram above).

It too contains a high percentage of minerals (in the form of hydroxyapatite), but not as high as enamel. Only about 70% of its composition is mineral, so relatively speaking, dentin is the “softer,” more cavity-prone, type of calcified tooth tissue.

Cementum is an ultra-thin mineralized layer that covers the surface of a tooth’s root.

It’s affected by the decay process, just like the other calcified tissues. But it’s so thin and destroyed so readily that we’ve confined our discussion to just dentin and enamel.

Is a tooth’s nerve involved with decay formation?

It’s only the tissues mentioned above that are directly involved with the process of tooth decay formation (a condition caused by tooth demineralization).

Yes, a tooth’s nerve (an interior, non-calcified tissue) can be damaged during the process. But that’s a secondary issue (a side effect) and fortunately doesn’t always occur. 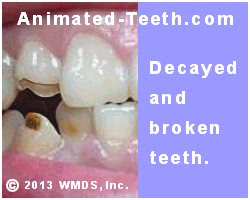 The terms dental caries, tooth decay and cavity all refer to the same thing and can be used interchangeably.
It’s pretty easy to see why the term “cavity,” which means a hole, has come into usage. The same can be said for the term “decay,” which makes reference to the destructive (decaying) aspect of this disease. Why the word “caries” is used may not be so obvious.

“Caries” is derived from the Latin word for “rot,” which is also a suitable description of the decay process. “Dental caries” is the term you will find most frequently used in scientific literature.

FYI: Beverages you may be consuming that have a low pH.

When it comes to causing tooth damage, there’s nothing unique about the acids that bacteria create. Anything that promotes acidic conditions in your mouth assists the same demineralization process, and that includes many of the beverages that people routinely consume.

An evaluation by Reddy found that:
Most of the beverages tested by this study had a pH lower than 4.0.

Dean JA, et al. McDonald and Avery’s Dentistry for the Child and Adolescent.

Reddy A, et al. The pH of beverages in the United States.