What should you do if you’ve swallowed a whitening strip?

– How harmful is it? – Factors and considerations. | What usually happens? | What do strip manufacturers say to do? | What becomes of the strip?

What happens if you swallow a Whitestrip®?

A potential problem unique to using strips as a teeth-bleaching method is the situation where one or more has been ingested (swallowed).

As this page discusses, there are a couple of factors that ultimately determine what level of event this becomes. But for most end-users, having done so will be of little consequence other than their possibly experiencing some minor gastric issues.

It’s important to point out, however, that this risk is a primary reason why you should: 1) Limit your oral activities during whitening sessions. 2) Only perform treatments during waking hours. 3) Keep your supply of strips well out of the reach of children.

How harmful is it to swallow a strip?

Crest®, the maker of the Whitestrips® product line seems to play down this issue.

This can be difficult to quantify, for a couple of reasons. 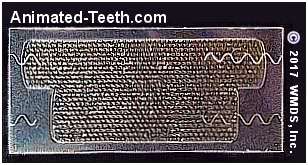 Be careful not to swallow Whitestrips®.

The following paragraphs expound on both of these issues further.

We searched through the most-used database for biomedical literature (the National Institutes of Health’s PubMed database) and also the CDC’s (Centers for Disease Control and Prevention) website for case reports involving swallowed whitening strips. Both searches came up empty.

That alone could be considered a positive sign that swallowing strips usually doesn’t prove to be an event of major concern.

In lieu of having any directly on-target resources, we offer the following information about swallowing hydrogen peroxide (solution) in general.

Based on case reports, the CDC suggests that for adults:

You might notice that with the example above that only the percentage of peroxide is stated, there’s no mention of the quantity consumed.

That’s because this information comes from case reports (like accidents that have happened). And inherently with these types of events, some factors, such as the precise amount of peroxide swallowed, are often never known.

Of course, the total amount of peroxide that’s been ingested, not just its concentration, will be an important factor in what level of effects are experienced.

As a basis of comparison with something you might be familiar with, the hydrogen peroxide that comes in the brown bottles from your local store usually has a 3% concentration.

Based on the specific weight of aqueous 3% hydrogen peroxide solution at room temperature, which is about 1 g/ml, it would take 1.3 tablespoons to create a 20 mg (one whitening strip) exposure.

Factors that would reduce the amount ingested.

The above calculations apply to swallowing a strip that’s in its most potent state (right out of its packaging). But if instead it’s ingested at some point following that (which is the more likely scenario), your exposure will be less, and possibly substantially so.

As a whitening strip is worn, the peroxide in its whitener coating gradually gets used up. (That’s why there’s limited benefit to extending the duration of a treatment session, or reusing a strip.

One would expect that this degradation process takes place most quickly initially, and then tapers off (in a fashion described as an exponential curve).

These conclusions seem to explain what Crest® states about swallowing their Whitestrips® products.

Our take: Swallowing a strip is usually of minor consequence because in most cases the event takes place at a point when the strip’s whitener is substantially depleted.

What about kids swallowing whitening strips?

The CDC webpage we’ve referenced above about ingesting hydrogen peroxide in general also states that “Children do not always respond to chemicals in the same way that adults do.”

They then follow that statement by saying “Different protocols for managing their care may be needed.” We interpret this as suggesting that in some instances emergency care may be required. So clearly, monitoring a child following their event is an important step.

We will point out that Crest® does not recommend the use of its Whitestrips® products for anyone under the age of 12 (age 18 for Whitestrips Supreme®).

Generally, the comparatively greater weight of children that have reached this age range proves to be an asset in avoiding complications, like systemic toxicity issues.

We don’t have the credentials to speculate how a very small child’s system might react to swallowing a strip(s) but will state that the event should be taken seriously.

We can imagine a scenario where a child has discovered an adult’s box of whitening strips and has ingested more than one. Of course, this event (a low-weight human having swallowed multiple strips in their most potent state) would also be a worst-case scenario.

Without question, safely storing your whitening strips out of the reach of all children seems an important consideration to enact upon.

What becomes of whitening strips that are swallowed?

In the case where the strip has simply been swallowed (no choking or coughing took place), the most likely event is that it has entered into your stomach.

If so, an object like a flimsy plastic (polyethylene) whitening strip can be expected to traverse the remainder of your digestive tract and eventually be passed uneventfully.

Crest’s® statement about what will happen with their Whitestrips® products seems to concur. They state “It will simply pass through your system.”