This page features simple animations that illustrate the use of basic orthodontic techniques to straighten teeth.

And while the ones we show were chosen because they’re frequently used with the Invisalign® system Intro to Invisalign®, they’re also routinely used with all other types of dental braces too. Other orthodontic systems.


A) Closing spaces between teeth.

Removable, clear aligner systems, like Invisalign®, are generally considered to be an appropriate treatment method for closing relatively small tooth gaps.
As a general rule of thumb, the amount of spacing involved (all spaces totaled together) should measure no more than 6mm per arch.

Here’s a digital smile makeover Before and after. that illustrates the type of tooth gap that the Invisalign® system might be used to close.

B) Crowded teeth are sometimes narrowed first, and then realigned.

Crowded teeth can be narrowed, and then realigned.

Some cases that involve tooth crowding can be transformed into, and then treated as, a case where the bulk of the treatment process involves space closure.

With this approach, the dentist will shave down the crowded teeth just slightly using their dental drill or a diamond-coated flexible strip (a process termed “tooth stripping” How it’s done.).

Then, once that’s been accomplished, it’s possible to use Invisalign® to realign the teeth within the same amount of jaw space that already existed.

Crowded teeth can be realigned by expanding the dental arch.

Another approach that can be used with the Invisalign® system is to correct tooth crowding by flaring out the patient’s teeth just slightly (referred to as “expanding the arch”).

With Invisalign® cases, the amount of arch expansion that’s created (the amount of extra space made so the crowded teeth can be realigned) can be as much as 2 to 4 mm.

The space needed to realign teeth is sometimes created by extracting teeth.

Another way to create the space that’s needed to realign crooked teeth is to extract one or more of them.

“Extraction” cases are commonplace in the orthodontic world. In most cases, they only involve the removal of back teeth (usually bicuspids), often in right/left pairs.

An example that involves front teeth.

Instead of using that approach, our animation for this section illustrates a case where a single crowded front tooth is extracted, and then the remaining 3 incisors are realigned into the space formerly occupied by all 4.

How does
it work?
Buttons &
Attachments
Orthodontic
Methods
Teeth
Stripping
Treatment
Limitations
Philosophically this approach strays from the ideal (pulling a perfectly good tooth just as an orthodontic short cut). But from a practical standpoint, it’s sometimes chosen.

When this method is used, it almost always involves the realignment of lower front teeth. And yes, the patient will end up only having 3 lower incisors (positioned in a space that’s normally occupied by 4). But the vast majority of people who see this person’s smile will never notice that anomaly.


E) Rotated teeth can be realigned with removable braces.

It’s usually best suited for cases where the teeth have a rotation that’s less than 20 degrees from normal.

“Attachments” What are these? | Pictures may be needed for these cases.

These strategically placed lumps of dental bonding help the aligners direct their forces to teeth in a way that without them Invisalign® might not be able to (efficiently, effectively) make the needed corrections.

F) Treating cases with both Invisalign® and conventional braces. 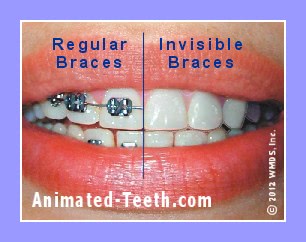 It’s possible that Invisalign® might be used for just a portion of a patient’s total treatment plan.

Since both types of braces are involved, the total
cost Braces fees. for this type of treatment plan would be expected to be greater than if it was treated with conventional braces only.