Important pages –Lumineers® – What are
they? | vs. VeneersProblems /
DisadvantagesCost &
LongevityConventional
VeneersAll
Pages
All topics.  »All Porcelain Veneer pages.  »Disadvantages of Lumineers®.

The placement of ultra-thin porcelain veneers, like Lumineers®, Vivaneers® or DURAThin®, using a no-drilling/no-shots protocol has its critics.

The two primary problem issues that are usually brought up are:

1) Placing them may result in below-average esthetics. – Ultra-thin veneers have a reputation for needing to be comparatively opaque, as opposed to more translucent and lifelike like regular porcelain veneers.

That can make new veneers hard to get used to. It can also make the teeth they’re placed on harder to properly clean.

Proper case selection is the key.

In response to these criticisms, dentists who favor the use of Lumineers® (or similar products) are quick to point out that these issues can be kept in check by way of proper case selection.

We’d generally agree. Many of the problems associated with Lumineers® placement tends to stem from the aggressive sales tactics of dentists who push the envelope related to when a no-tooth-preparation protocol should be used.
An attitude of “just as long as the patient is informed and willing to compromise” is frequently given as justification for going ahead with the procedure.
We’re not so sure how ethical that stance is considering how little most patients seem to comprehend about this subject and the potential problems that may lie in store for them. Hopefully, the contents of this page can help with that.

It’s also important to state that every patient should consider all possible alternatives before opting for any type of veneering procedure.

a) Ultra-thin veneers frequently need to be very opaque.

(Use the in-text links for an explanation.)

Why is having opaque veneers a problem?

The whole issue of opaqueness has to do with how natural looking the veneered tooth will end up looking.
Tooth enamel, the part of a tooth that a veneer tries to mimic, is translucent (light is able to pass through it). And a great deal of what gives a tooth its lustrous look has to do with the way light enters into this layer and is then reflected back out. (See diagram.)

If a veneer (or veneer/cement combination) doesn’t accurately simulate enamel’s light-handling effect (as in it’s too opaque and keeps light from entering), your tooth’s appearance won’t look quite right. It might look white, but it won’t look perfectly natural.

Take the case where an ultra-thin veneer is used to lighten the color of a darkly stained tooth.

(This is the exact same problem that occurs with dental bonding. This page explains and illustrates this phenomenon in detail, just substitute the words “dental bonding” with “opaque veneer.”)

Because they are thicker, conventional porcelain veneers can be made out of comparatively more-translucent porcelain, yet still be able to mask dark tooth structure that lies underneath them.

And due to this translucency, light will be able to enter into the veneer and reflect back out in a fashion that truly mimics the lustrous look of a natural tooth. (This page explains and illustrates this issue in detail.)

Also, a thicker laminate generally offers the dental technician more opportunity to incorporate characterization and shading qualities into the veneer itself by way of using different shades of porcelain in its fabrication (see images below).

A lot of people simply don’t appreciate this difference.

We do have to admit that when it comes to the issue of obtaining a precisely lifelike result, many people just don’t seem to care.

The ease and pain-free advantage that no-drilling/no-shots technique offers simply outweighs the disadvantage of a less than perfectly natural-looking outcome.

That’s probably because people’s attitudes about tooth appearance have changed over the last couple of decades, likely due to the explosion of tooth-whitening options that have become available over this same time frame.

Whitening processes tend to rob tooth enamel of translucency. And as a result, the patient ends up with a set of uniform snow-white “Chiclets” (teeth).

Nowadays, it seems that that is the look a lot of people are seeking. And if that’s the one you want, it’s easy enough to get with a set of Lumineers®.

Especially in the case where only one or a few veneers are being placed, the increased characterization that’s possible with a (thicker) conventional veneer may be an important asset in creating a perfect match with the patient’s neighboring teeth. 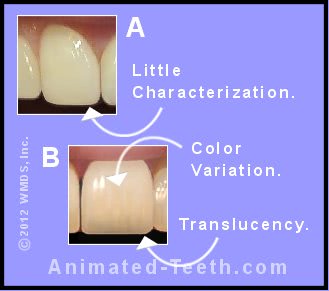 It’s the characterization of a veneer that helps it to look lifelike or match well.

The two teeth shown in our graphic illustrate this point. Both teeth have a nice66 appearance. One does, however, look more lifelike and the other more “plastic.”

Another criticism of placing Lumineers® using a no-tooth-preparation technique is that it can result in teeth that are bulky and over-contoured.

It’s easy enough to see how placing no-prep veneers could result in this outcome. After all, if you bond a shell of porcelain over the surface of a tooth without trimming it back first, its overall dimensions will be larger. It’s only a question of how much, and if it’s enough to cause problems.

Case selection is key in avoiding this outcome. When Lumineers® are placed to just make minor enhancements and upgrades, the results can be acceptable. But when what is trying to be achieved lies beyond general guidelines, a problematic outcome can be expected.

(An excellent way to get to evaluate how the addition of ultra-thin veneers may affect the size and thickness of your teeth is to view a pre-treatment diagnostic wax up of your case.)

a) What are some of the potential problems?

Placing restorations that create larger, fuller teeth can easily result in a look that’s artificial. In extreme cases, the term having “horse teeth” may certainly apply.

Of course, the degree to which this occurs is the key. And toward keeping it to a minimum case selection is always a primary determinant.

Despite this outcome, the convenience and comfort of being able to take advantage of no-drilling/no-shots placement may be so attractive to some people that this is an easy enough trade-off to choose. Having bigger, larger teeth is not a concern as long as they’re whiter and more perfect.

Another area of concern is how the increased size of the veneered teeth will affect the person’s daily activities.

Fortunately, over time people tend to adapt to these types of difficulties. It’s just a matter of how extreme the change has been.

No-tooth-preparation veneers (like Lumineers®) must be ultra-thin so they don’t add too much bulk to the tooth.

(A primary concern is the amount of thickness added at the gum line.)

If you bond a porcelain veneer directly onto the untrimmed surface of a tooth it will change the tooth’s contours, in the sense that there will now be a ledge (sometimes referred to as a “speed bump”) right where the veneer ends (see our “No” graphic).
(Dentists formally refer to this type of change as affecting the “emergence profile” of a tooth, meaning altering its contours in the region where it exits the gums.)
This type of over-contouring can:

(In general, under contouring a dental restoration typically makes a more benign error than over-contouring. And placing no-drill Lumineers® seems to break this rule of thumb.)

Problems that may develop.

The consequences of either can be problematic to resolve.

The solution. / The dilemma.

The way to ensure that a veneer’s contours don’t promote plaque retention is to make its gum line edge as thin (knife-edged) as possible. And generally speaking this is easy enough to do.

The dilemma lies in the fact that in some cases doing so may compromise the esthetics of the restoration. That’s because the thinness of the veneer in this region may not effectively mask over the underlying tooth structure. (For example, this could be a problem in cases where veneers are used to lighten the color of teeth.)

(Here’s a solution for this problem if the patient allows.)

Research into the matter.

General applications.Closing tooth gaps.“Straightening” teeth.
Several studies have evaluated how an over-contoured dental restoration tends to affect the health of the surrounding gum tissue.
As an example, one study (Deng) determined that:

Since Lumineers® can be fabricated as thin as .2mm in thickness, the above findings seem to confirm that placing them using a “no drilling” technique can produce acceptable results.

The potential for problems comes into play when this technique is used when ideal pre-treatment conditions do not exist. This would include placing ultra-thins as a way of creating “instant orthodontics” (see example below), especially with cases involving protruded or severely crowded or rotated teeth.

Ultimately, a person’s oral home-care habits may be the most important factor.

Some studies (Ehrlich, 1980 and Kohal, 2003) have determined that the most significant issue associated with over-contoured restorations is the effectiveness of the person’s oral hygiene. Those people who put in the effort and do an effective job do not develop problems.

This seems to justify (rationalize) the placement of no-prep veneers, even in situations where the resulting contours of the teeth will be less than ideal. However, one must realize that doing so commits them to the situation where they must perform satisfactory oral home care, every day, for the rest of their life. (How many people do that?)

Here’s an example of the type of case where the placement of no-drill Lumineers® could easily result in teeth that are too oversized.

… but at the expense of making them too bulky.

It involves the situation where veneers are placed to improve the apparent alignment of crooked teeth. (Dentists refer to this as “instant orthodontics.”)
1) The no-prep approach.
Our first graphic illustrates how the veneers, while ultra-thin in some areas, will need to be relatively thick in others.

That’s the crux of the problem we’ve been discussing. With a no-tooth-preparation approach, the veneers alone make up the needed thickness variations. And as you can see, using this method can easily result in bulky or over-contoured teeth.

Preparing (trimming the teeth back) as a first step …

… gives a result where the teeth are even yet not bulky and over contoured.

With it, the most prominent portions of the teeth are trimmed back first and then the veneers are made and placed.

Using this method, each tooth’s contours can be kept within normal limits.

Note: Lumineers® can be placed using no-drill or conventional veneering techniques. It is the method of placement that is the issue here, not the specific brand of veneer.

DiMatteo AM. Prep vs No-Prep: The Evolution of Veneers.