– The preparation of the back portion of the upper jaw (premolar/molar area) for a dental implant. | The steps of the procedure. | Open vs. Closed sinus lift procedures. | Healing times. | Types of grafting material used.

A) What is a Sinus Lift?

The “sinus lift” is a bone-grafting procedure that’s required when the volume of bone found in a patient’s upper jaw (in the region originally occupied by their bicuspid or molar teeth) is inadequate to accommodate the physical dimensions of a planned dental implant (length is usually the concern).

Examples of when sinus-lift surgery is needed.

There can be several reasons why the volume of bone found in the posterior portion of a patient’s upper jaw might be insufficient to accommodate a dental implant. Some common ones include:

When there’s not enough bone for an implant, a sinus lift is needed.

We discuss all of these possibilities in greater detail on our implant placement bone evaluation page.

B) What does the sinus lift procedure accomplish?

When this procedure is performed, a portion of the maxillary sinus is filled in with bone (grafting material). The result is a thicker sinus floor into which a tooth implant can then be placed.

C) How is the sinus lift procedure performed?

The specific technique that a dentist uses can vary. But traditionally this surgery has been performed as follows:

A sinus lift increases the thickness of bone. 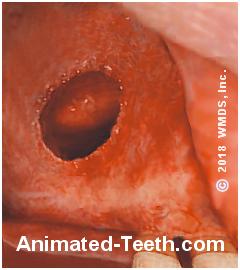 The bone graft materials are placed through the sinus window opening.

The above described lateral wall technique is referred to as an “open” sinus lift (due to cutting open the bony wall of the sinus).
Other open procedures involve creating a “window” (opening) through the sinus wall through which the sinus membrane is lifted and then grafting materials (supported and shaped by a manufactured collagen barrier membrane) are packed.

“Closed” procedures involve the placement of the bone graft material less invasively. For example, one method involves placing/pushing it through small holes drilled through the jawbone in the area directly adjacent to where the implant is placed.

An advantage of using a closed procedure is that the resulting wound is likely less extensive. And with some techniques, it’s possible that the implant itself may be placed during the same procedure. Both of these factors can reduce the amount of healing time or the number of surgeries needed for a patient’s case.

As a disadvantage, with some closed techniques only a limited amount of bone width/volume can be gained.

How much healing time is required?

Generally speaking, the amount of time allowed for bone graft healing lies on the order of 6 months, with a range of 4 to 8 months being common.

That means in cases where a sinus graft is performed first and then after healing has occurred the implant is placed, the patient’s total treatment process may encompass 9 months to a year until complete healing and osseointegration (fusion of the implant and bone) has occurred. (6 months for graft healing, 3 to 6 months for implant healing.)

In cases where the bone graft and implant placement procedures are performed during the same appointment, the graft’s healing and implant’s osseointegration will take place simultaneously, thus shortening the amount of treatment time needed for the completion of the patient’s case.

Studies suggest that in cases involving sinus lift procedures, the amount of original bone thickness (height) needs to lie on the order of 4 to 5 mm (about 1/2 to 1/3 the length of the embedded implant). (Bortoluzzi)

That’s because this is the thickness of bone that will provide stability for the implant during its healing process. Implant stability is an important factor in its successful osseointegration (fusion with the surrounding bone).

So in cases where the amount of original bone is less than this amount, the treating dentist will most likely utilize a two-step process (sinus grafting first, then after healing, the implant is placed). If the amount of bone is greater, then it may be possible to perform both procedures at the same time.

What types of bone-graft materials are used with the sinus lift procedure?

Several different types of bone-grafting materials can be utilized with sinus lift surgery.

In its discussion of this subject, a study by Yoon (2014) states that the reported survival rates for implant placement associated with sinus lift procedures range from 92 to 97%. (Success is generally judged by implant loss or detected mobility).

It’s important to state that there can be a host of factors involved with implant failure.

My dentist didn’t offer. Can I request that my implant is placed when my lift is performed so my treatment is quicker?

Absolutely there’s no harm in asking but there may be reasons why doing so simply isn’t possible.

No doubt bottom line, you and your dentist want the same thing, a successful outcome. And right now it seems that your dentist is of the opinion that a two-stage approach makes the most predictable option. It’s true that techniques and further research are always evolving, so you should ask what’s possible. But as discussed above, it’s likely the thickness of your current bone in that area (and the lack of implant stability that it can likely provide) that has dictated their planned approach.

Hi, 9 months ago I had a upper sinus lift with Dio implant where I had an extraction on 26, 27 had been a old root canal treatment, with amalgam filling, it had never been capped, now after the sinus lift and implant I’m due to go back for the abutment and porcelain crown to be fitted, but I’ve been experiencing for several months during the healing process of the upper sinus lift, a pain of sorts which feels like it’s coming from 27 canal treated tooth deep inside my gum, it seems to be there all the time it’s a throbbing dull pain, and constant, I went to my local dentist who X-ray the area, but could not see anything wrong with the tooth I’m thinking the pains coming from, there’s no hot or cold sensitivity on the tooth, only deep within my upper gum, jaw area, I’m worried as when I go back overseas to Budapest to have the work finished, that alls not right with what they did when they did the upper sinus lift, as I’ve also had a bad cough since having the upper sinus lift, any help would be greatly appreciated, thank you, in advance of your reply

(For anyone reading, the tooth numbers stated are European nomenclature. Their USA equivalents are upper molars #14 and #15.)

As far as diagnosing your problem, we’re not going to be of any help at all. The obvious difficulty is that you have two adjacent sites, either of which might be the cause of your symptoms and hard to distinguish between.

As comparative worst-case scenarios, you might have failing root canal treatment (infected tooth) or a sinus or graft infection. (You mention a persistent cough, which is sometimes caused by persistent sinus drainage due to a sinus infection.)

But conceivably, even something as simple as teeth grinding (bruxism) could cause the symptoms you describe with your tooth.

You should be in touch with the dentist who placed the implant. They might request that you have some type of radiograph taken that could be forwarded to them so to help them pass judgment on their work.