Can a crown be placed without its tooth having root canal treatment first? | If not, why do so many crowned teeth end up getting root canalled? | Statistics about the endodontic therapy vs. crown relationship.

Some people seem to think that if a tooth needs a crown that it also has to have root canal therapy. To the contrary however, these are entirely separate procedures and most certainly one can be performed without the need for the other. 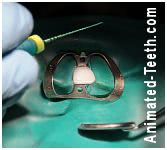 Root canal treatment being performed on a previously crowned tooth.

Having said that, there are some statistical relationships between the two. For example:

B) What is the relationship between crowned teeth and a need for root canal therapy?

A number of studies have evaluated crowned teeth over the long term to see what type of events they tend to experience.

As we report below, it’s commonplace that crowned teeth with no previous history of problems with their nerve (pulp) tissue ultimately develop complications that necessitate their having endodontic therapy.

Studies and their findings –

(FYI page: 8 things you can do to reduce your chances of ever needing a dental crown. Jump to page.)

You might wonder why the above statistical relationships exist. What is the cause?

For the most part, the answer lies in the fact that dental crowns are usually used to rebuild teeth that have experienced some type of significant structural damage. And as it happens, these same types of events can also insult or compromise the tooth’s nerve tissue and therefore create a need for root canal treatment too.

The relationship between the two is a little bit like the similarity between automobile bodywork (= getting a crown) and under-the-hood work (= having root canal treatment).

2) Your tooth’s crowning procedure may have stressed its nerve.

If you think about the crowning procedure from your tooth’s perspective, the process really is a big, potentially traumatizing, event.

During the procedure, a drill is used to grind away essentially all of the tooth’s enamel layer, and a fairly substantial amount of the dentin encasing its nerve (pulp tissue) too. Related to doing so:

a) The act of drilling creates friction and therefore heat.

The nerve inside a tooth is living tissue. And exposing it to elevated temperatures (like those possibly created during tooth trimming) can damage it. Our Anusavice resource states that this type of event creates the greatest risk of causing tooth trauma during its procedure.

The good news is that tooth dentin (the hard tooth structure that encases a tooth’s nerve) is a good insulator, even at thicknesses down to 1mm (4 hundredths of an inch).

Unfortunately, a dentist has no way of precisely quantifying how thick the dentin is at any one point on the tooth, so the question of how much pulpal protection actually exists always remains.

As a primary method of controlling heat production, a dentist will always strive to ensure that the tooth surface they are trimming is constantly bathed in water. (That’s why dental drills spritz a mist.)

b) Drilling creates jarring vibrations that are transmitted throughout the tooth.

The dentist can minimize the level of trauma they create by using a light touch with their drill (this helps to minimize heat production too). Dental drills characteristically make sound, and how labored the whine is hints to the level of workload involved.

Another cause of mechanical trauma to a tooth is caused by dental drill bits (burs, stones, diamonds) that have lost their concentricity, and thus have a minute wobble when they’re used.

Due to the porous nature of tooth dentin, the action of the dentist’s drill can pump bacteria into this layer in the direction of the underlying pulp tissue. As a result, it may become irritated.

Once again, a dentin thickness of just 1mm is considered enough to provide adequate pulpal protection. But as stated above, a dentist never really knows if this thickness exists.

It’s very common that a dentist will repeatedly wash and dry off the tooth that they are preparing.

In some cases, they may apply some type of agent to the tooth in association with this step. Or chemicals used with other steps of the procedure may come into contact with the freshly prepared (porous) tooth surfaces.

Minimizing the use of compounds can help to limit pulp tissue insult. The dentist must also take care to ensure that their air-drying of the tooth isn’t excessive and causes dehydration.

The cumulative effect must be considered.

Obviously, none of these types of trauma are experienced in isolation, and therefore its the cumulative effect they create that is of primary concern.

Some teeth will make it through the crowning process fine, others won’t.

How the tooth’s nerve tissue will respond is an unknown factor. The general idea is that if at the start of the procedure the tooth’s pulp tissue was healthy, in the vast majority of cases, and especially if the dentist takes the needed precautions (discussed above), it survives just fine.

But in cases where the health status of the pulp tissue is already compromised (like discussed at the beginning of this page), it may not be able to rebound. If not, symptoms and the need for root canal treatment will pursue.

Isn’t all of this reason enough not to have a crown made for a tooth?

No, if a crown is indicated, then that’s the best plan. Yes, possibly the trauma of the procedure will, on its own, be the traumatic event that triggers the ultimate degeneration of the tooth’s pulp tissue.

But if so, it’s most likely that the procedure was simply the event that finally pushed the health of the compromised tooth’s nerve over the edge. The crowning process precipitated the timing of an outcome that would have ultimately occurred anyway.

D) The timing of the need for root canal treatment can be quite varied.

There can be a lot of leeway as to when a crowned tooth’s need for endodontic therapy finally becomes apparent.

The timing of events may seem suspicious.

When symptoms occur relatively sooner, it may seem that the crowning process itself has been the culprit. This can be true (for all of the reasons outlined above), but usually the tooth’s procedure was not the original causative factor. Here’s an explanation why.

Your tooth was probably worse off than realized.

Dental crowns are most frequently used to rebuild teeth that have experienced some type of structural catastrophe (crack, fracture, large cavity, lost filling).

And due to having experienced this traumatic event, it can be that the tooth’s pulp tissue, while still able to survive, exists in a compromised state. (As in it’s no longer as resilient as it once was and therefore isn’t as able to healthily rebound from trauma or insult.)

While in this state, it’s possible that some type of stimulus (such as the crowning procedure) will trigger the final degenerative process of the tooth’s nerve, and its subsequent need for root canal treatment.

Should your dentist have anticipated this problem?

A history of your tooth being asymptomatic isn’t conclusive evidence that all is well with its nerve. And while you can’t expect your dentist to be all-knowing, there are routine tests that they should perform that may reveal a tooth’s endodontic problems before its crowning procedure is begun.

As routine as taking a radiograph of a tooth is in preparation for its crowning procedure, when it comes to diagnosing endodontic problems an x-ray by itself often isn’t conclusive.

What exists in the picture may be difficult to interpret. Or the tooth’s condition may be at a stage where the types of changes visible on an x-ray have not yet developed. Why?

It’s generally accepted that thermal (cold) and electric pulp testing can provide a reasonably reliable estimate of the status of a tooth’s nerve (Weisleder, Jespersen) and therefore they should be performed prior to the tooth’s procedure.

Despite performing these and even additional evaluations Nerve-health testing., the results of x-rays and clinical testing can be vague and difficult to interpret.

If collectively all signs tend to point to the same conclusion, then great. But without a clear consensus, a dentist will probably give the tooth the benefit of the doubt as opposed to performing root canal treatment without a clear indication.

Cheung GS, et al. Fate of vital pulps beneath a metal-ceramic crown or a bridge retainer.

Tan K, et al. A systematic review of the survival and complication rates of fixed partial dentures (FPDs) after an observation period of at least 5 years.

Valderhaug J, et al. Assessment of the periapical and clinical status of crowned teeth over 25 years.