– Which teeth are the wisdom teeth? How many do you have? | Pictures and examples of 3rd (and 4th) molars. | What does it mean for a wisdom tooth to be impacted? | Impaction classifications: mesial, vertical, horizontal, distal / full-bony, partial-bony, soft-tissue.

1) What are wisdom teeth?

►  “Wisdom teeth” are a type of molar. Molars are the large chewing teeth found furthest back in a person’s mouth.

►  Most people have 1st, 2nd and 3rd molars. A person’s third molars are their wisdom teeth.

How many wisdom teeth does a person have?

◄ Front of mouth.|Rear of mouth. ►

Is this always the case?

No, it’s been estimated that about 25% of people are lacking one or more of their third molars (Faculty). In these cases, it’s due to a variance in their genetic makeup.

Some people have more.

It’s possible for a person to have additional wisdom teeth. In this case, what actually exists is that they have both 3rd and 4th molars.
An evaluation of a population of US servicemen and women by Shadzad determined an incidence rate of 2% for the presence of at least one 4th molar.
(The most common case was a single upper 4th molar, like shown in our picture below.) 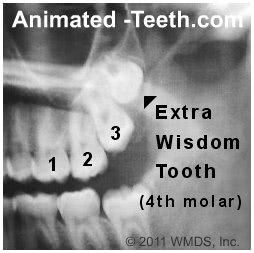 When do wisdom teeth come in?

For most people, the eruption of their 3rd molars takes place during their late teens or early twenties.
(Eruption = The physiologic process by which a tooth attempts to come into position in the mouth.)

The most common time frame for the eruption process is 18 to 24 years (Faculty).

FYI: The usually recommended time window for having your wisdom teeth removed What age? is based on issues related to tooth development/eruption.

2) What are “impacted” wisdom teeth?

In dental terminology, an “impacted” tooth refers to one that has failed to erupt into its expected position in the mouth, within the expected time frame. This failure may be related to:

The entire lower portion of this page contains illustrations and animations that detail the various types of wisdom tooth impaction classifications.

Dentists use a number of terms, in combination, to describe the positioning of impacted teeth.

How these individual classifications are used.

To fully describe a tooth’s situation, a term will be chosen from both of the above groups. For example, a “full-bony mesial impaction” indicates a tooth that …

Our pictures and animations below provide examples of impaction types.

a) Mesial, vertical, horizontal and distal.

The other types of impactions, in order of frequency of occurrence, are the vertical, horizontal, and distal types.

Wisdom teeth having a mesio-angular or vertical angulation are the most common types of impactions, making up roughly 40% of cases each.

In comparison, horizontal and disto-angular impactions are much more rare, with less than 10% of cases involving teeth with a distal orientation and less than 5% with a horizontal one. (Hupp)

FYI – When making their preoperative assessment of the expected level of difficulty of an extraction Governing factors., the dentist will pay particular attention to the angulation of the tooth because that’s a significant factor, and readily observed on pre-op x-rays.

It’s interesting to note that the same general orientation poses the opposite level of challenge with teeth in the upper vs. lower jaw.

Here’s an x-ray of a single individual whose four wisdom teeth can generally be categorized as each of the four classifications of impactions. 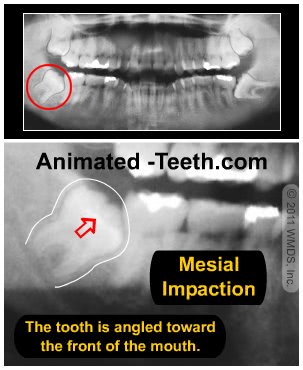 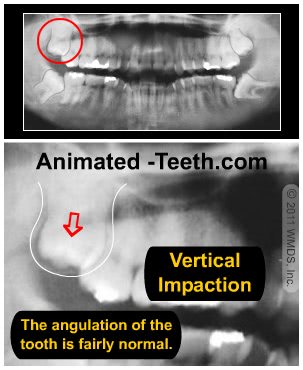 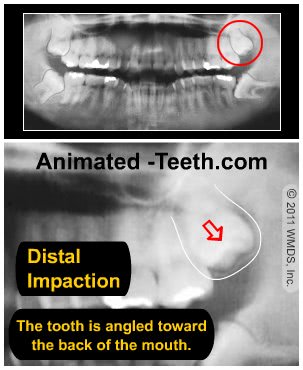 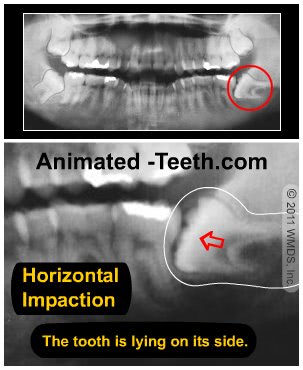 In combination with the classifications above, wisdom teeth are also categorized as soft tissue or bony impactions.

FYI – The cost Fee estimates. to remove an impacted wisdom tooth is typically based on its soft-tissue/bony classification.

And as you might expect, within this group soft-tissue impactions are typically the easiest to perform, followed by partial and then full-bony.

3) How likely is it that your wisdom teeth will be impacted?

Studies suggest that the incidence rate of having at least one impacted third molar runs on the order of 65 to 72% for populations under the age of 30. (Faculty)

(Older populations, of course, have a lower incidence of impacted wisdom teeth because many of the people evaluated would have had theirs removed when younger.)

The reason why some wisdom teeth are impacted is not an easy question to answer. A primary cause simply seems to be a condition of inadequate jawbone space behind a person’s second molar.

Why this lack of space exists is not fully understood. There does, however, seem to be a correlation between large tooth size and/or the presence of generalized tooth crowding and having impacted wisdom teeth.

The human diet has changed.

The dietary changes adopted by modern man have been theorized as playing a role in the incidence of 3rd molar impaction.

The coarse nature of stone-age man’s diet had the effect of producing extensive tooth wear (not just on the chewing surface of the teeth but also in between, where neighboring teeth touch against each other).

When this type of wear takes place, it tends to reduce the “length” of the teeth (as a set), thus creating additional jawbone space to accommodate the wisdom teeth by the time they erupt. In comparison, the diet of modern man does not usually cause a significant amount of this type of wear.

Additionally, the harsh world of the caveman no doubt often led to the occurrence of broken teeth and tooth loss. Once a tooth (or a portion of it) is missing the teeth behind it have a tendency to shift forward. This type of movement would make more jawbone space available for wisdom teeth. In comparison, with the advent of modern dentistry, there are relatively few reasons why a tooth should remain unrepaired or be lost.

Faculty of Dental Surgery of The Royal College of Surgeons of England. Current Clinical Practice and Parameters of Care. The Management of Patients with Third Molar (syn:Wisdom) Teeth.