Do wisdom teeth cause crowding of your front teeth?

– A person’s teeth may shift over time, but is this change caused by their third molars? | What do most dentists think? | What does dental research report? 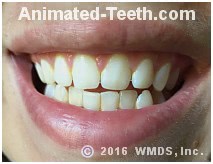 Lower incisor crowding that has developed some years after orthodontic treatment.

Will having your wisdom teeth removed prevent your other teeth from shifting?

There’s a belief that’s held by some members of the dental community, and a large percentage of the general population, that a person’s wisdom teeth exert pressure on the teeth in front of them. And as a result, those teeth are pushed out of alignment (become crooked).

Which teeth are usually affected?

The teeth most discussed with crowding theory are the lower front ones, especially the lower incisors (see picture). This effect is less mentioned in regard to upper front teeth.

Why is understanding this phenomenon important?

If it could be prevented, it seems obvious that experiencing this type of tooth shifting would be a disappointment to anyone.

It also seems that encountering this effect would be especially disheartening for someone who had previously completed orthodontic treatment.

A patient’s orthodontic treatment has usually been completed long before their third molars have started to come in. (An event that normally takes place between ages 18 to 24.)

Knowing that the work they’ve provided is as stable as possible is a prime concern for orthodontists (hence this topic is important to them). When this phenomenon occurs, they refer to the relapse as “secondary mandibular incisor crowding” (mandibular is the dental term for lower teeth).

What if this theory is correct?

Whether or not this type of tooth shifting can be caused by wisdom teeth matters quite a bit.

What does research show about the third molar / tooth crowding relationship?

You might be surprised to learn that the dental community has been investigating and debating this issue for over 100 years.

And while it seems that the majority of dentists, especially those trained more recently, now consider this theory to be invalid (an opinion that wisdom teeth do not cause tooth shifting and therefore should not be extracted as a preventive for it), it must be stated that even today this controversy has still not been totally resolved.

How the opinion of dentists has changed over time.

As recently as 50 years ago (and possibly less, see below), a majority of dentists (specifically oral surgeons and orthodontists) felt that a correlation between wisdom tooth eruption and teeth shifting did exist.

Choosing this stance was founded on the research of the era.

Probably what was overlooked by the dental community was that each of these studies only involved a small sample size. Also, at this point in time, it seems not enough research had yet been performed to allow the formation of group conflicting or alternative views.

Over the course of the last 50 years, quite a bit of additional research has been conducted on this subject. However, admittedly much of it paints a contradictory or inconclusive picture.

As a help in wading through and passing judgment on this data, we’ve decided to rely on the findings of several literature reviews that have already performed this job. Their process has involved:

The primary goal of this review was to see if evidence could be found that supported the prophylactic (preventive) removal of wisdom teeth in general. It evaluated 260 papers. Only two of these met their screening criteria and also addressed the topic of tooth crowding.

The opinion drawn was that the only scientific proof available suggests that the prophylactic extraction of wisdom teeth for the purpose of preventing the shifting of the lower incisors is not justified.

This paper evaluated 223 articles, of which only 21 met its screening criteria. The authors readily stated that collectively they were quite contradictory and supported both sides of the teeth-shifting argument.

They concluded that “third molars do not cause tooth crowding.” But did state that they may play some role in combination with other factors (see below). However, this review did not make a recommendation for the prophylactic removal of wisdom teeth.

This review pointed out that the insufficiency of high-quality studies makes it difficult to formulate definitive guidelines. But stated that there is currently “no sound research evidence supporting the prophylactic removal of non-pathological impacted third molars.”

What’s interesting is that the authors of this paper noticed a transition in the opinion of researchers over the decades.

What is the current opinion of dentists on the wisdom teeth / teeth shifting debate?

We found a study that seems to confirm the change in attitude that the Almpani paper just discussed suggests. In contrast to the statistics cited above for the 1970’s era, the current opinion of clinicians is apparently different now.

Lindauer surveyed roughly 400 orthodontists and oral surgeons (for a total of over 800 clinicians) in regard to the theory: Do erupting wisdom teeth cause anterior tooth crowding? The findings of the study were:

If extracting third molars reduced the potential for tooth shifting, orthodontists would have fewer case failures (relapse) over time. So their lack of support for this theory is telling.

The age of the clinician seems to be a factor in which opinion they hold.

The author noticed a relationship between the age (year graduated) of the clinician and their response.

These findings suggest that the developing trend in the opinion of clinicians is that removing wisdom teeth doesn’t play a significant role in preventing tooth crowding and is therefore unwarranted.

Nothing on this page is meant to suggest that people who have third molars don’t have teeth that do shift during their lifetime. But rather that research has not been able to definitively demonstrate a firm statistical correlation between the two.

That’s led some researchers to suggest other reasons as a cause of this phenomenon. Some of them are:

For more information on this subject –

We offer the following pages for additional information about reasons to or not to remove wisdom teeth:

Costa MG, et al. Is there justification for prophylactic extraction of third molars? A systematic review.

Lindauer SJ, et al. Orthodontists’ and surgeons’ opinions on the role of third molars as a cause of dental crowding.

Sidlauskas A, et al. Effect of the lower third molars on the lower dental arch crowding.