– What do they look like? – pictures | Signs and Symptoms | What causes these lesions? | What treatment is needed?

What is a sinus tract?

In dentistry, the term “sinus tract” is used to refer to the situation where:

The anatomy of a sinus tract.

Patients frequently use the term “gum boil” to refer to the associated pimple-like lesion they see on their gums.
The term “fistulous tract” is sometimes used to refer to this type of lesion. However, according to formal medical terminology, its use is technically inappropriate. (Hargreaves)

Despite the word “sinus” being a part of the term, a person’s nasal sinuses typically have no involvement with the lesion.

a) There’s usually no tooth pain.

While the formation of a tract is a sign of infection, the tooth in which it’s located typically remains asymptomatic. (Although there may be a history of pain or swelling associated with the tooth prior to the tract’s formation.) (Hargreaves)

That’s because the pain associated with pus formation is usually due to the effect of pressure buildup. Since with sinus tract formation the pus is free to vent off, no pressure buildup occurs and therefore no discomfort is experienced.

Because pain typically isn’t felt, these lesions may go unnoticed, possibly for years. Many times they’re only first discovered through the thoroughness of a dentist’s routine examination. (Tronstad)

The pimple that forms at the tract’s orifice (opening into the mouth), or the general area surrounding it, may display some tenderness. If so, it’s usually only slight. However, it may be noticeable enough to bring the presence of the lesion to the person’s attention. 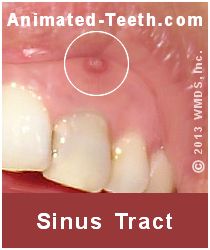 Proximity to the tooth.

The pimple-like lesion that forms at the tract’s exit point on the patient’s gums typically lies directly adjacent to the tooth that harbors the infection. But that’s not always the case.
It is possible that the tract’s terminus instead empties at a fairly distant point. And since the tooth that lies at fault is frequently asymptomatic, determining exactly which of the patient’s teeth is the culprit may not be immediately obvious to the dentist.

As a means of discovery, a dentist will often insert a slender cone of gutta percha What’s this? directly into the tract and then take an x-ray.

The flexible nature of the cone (which is radiopaque, meaning it will show up on the x-ray) will follow the tract’s path to its source (the infected tooth), thus making the diagnosis obvious.

Location on the jawbone.

As illustrated in our diagram, it’s common for the location of the pimple that forms to lie at a level that approximates the level of the tip of the infected tooth’s root.
▲ Section references – Tronstad, Hargreaves

The size of the tract’s orifice (the pimple-like lesion that forms on the patient’s gums) may enlarge or deflate over time. This may involve a daily, weekly or even monthly time frame. 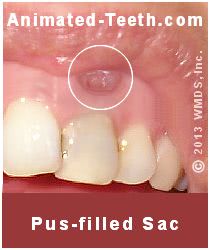 As compared to the picture above, you can see the pimple is fuller (retains some pus).

As an explanation, the quantity of pus that vents through the tract will tend to wax and wane in step with the current activity of the tooth’s infection. And once this volume of pus has reached the tract’s orifice, its freedom to pass on through the gum tissue without being restricted or retained will influence the current size of the lesion.

If the tract’s orifice has become blocked or restricted (such as partially healed over, like during times of low infection activity), tissue swelling will tend to form because some quantity of the pus will be trapped in the soft tissues.
Then, once this opening has opened back up (due to the pressure of the accumulated pus), drainage can resume, thus bringing down the size of the boil/pimple.

Since a sinus tract is simply a drain for pus, the discharge coming from one may have a noticeably bad taste. Sometimes this is the only tip-off to a person that their lesion exists.

How and why do sinus tracts form?

The response of a person’s body to the presence of infection is a process termed inflammation. And some of the chemical mediators involved with this process trigger bone resorption (bone tissue breakdown). As a result, a tract begins to form.

The infection that has triggered the tract’s formation is typically characterized as being a chronic (long-standing) one, with the tract developing over time. But formation is possible in conjunction with acute episodes too (sudden swelling flare-ups).

What treatment is needed?

The solution for a case that includes the presence of a sinus tract is to resolve (clear up) the associated tooth’s infection. In most cases, that simply means performing root canal treatment.
Once that process has been completed (and therefore the factors that triggered the tract’s formation have been removed) the tract and its surface lesion can be expected to close within a few days. (Hargreaves)
In cases where this doesn’t occur, further evaluation is required. The assumption at this point would be that either the tooth’s endodontic therapy was not successful. Or that there are additional factors involved.

As an example of other possible factors, the continued source of infection may be due to a periodontal (gum disease) condition.