Coronal leakage – A cause of root canal treatment failure. –

What is it? | What causes it? – How does it happen? | How can it be prevented? | Which type of dental restoration creates the best seal for a tooth? – crown vs. filling

Coronal leakage: What is it?

Dentists have become increasingly aware of a process termed “coronal leakage.” This phenomenon involves the situation where bacteria and debris find a way to seep into and recontaminate the interior of a tooth that has previously had root canal therapy.

Why is it a problem?

Coronal leakage causes root canal treatment failure. Once it has occurred, the tooth will require endodontic retreatment How succesful is this? so to once again clean/disinfect and then reseal Procedure steps. the tooth’s root canal system.

How is coronal leakage prevented?

As this page explains, it’s prevented by way of placing an appropriate permanent dental restoration for a tooth promptly after its root canal work has been completed.


This page’s highlights as a video –

Note: Dental-Picture-Show’s content and videos have now been absorbed into Animated-Teeth.com.

A description of the phenomenon of coronal leakage. 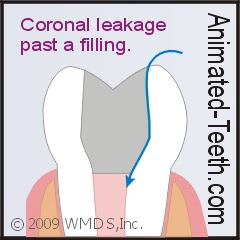 If the filling’s seal is compromised, bacteria can recolonize the tooth’s root canal system.

One of the primary goals of root canal therapy is the elimination of bacteria and other contaminants from within the tooth. Why? | How?
Now, imagine the situation where a tooth’s treatment has been successful in accomplishing this task. But, over time, the same types of contaminants that were originally associated with its problems are once again able to leak back into its interior space.
Once this occurs, the conditions inside the tooth will revert back to those similar to what existed before its therapy was performed. And as a result, what had been successful treatment will now ultimately fail Signs | Symptoms.

That scenario describes what coronal leakage is.

Coronal leakage is the phenomenon where oral debris and bacteria seep from the patient’s mouth, past an endodontically treated tooth’s dental restoration, and ultimately penetrate into and recontaminates its interior root canal space.

The term “coronal” refers to the fact that the entry of the seepage is via the “crown” portion of the tooth. (The part of the tooth that’s visible above the gum line.)

What research has found.

While the concept of coronal leakage has been known for over 100 years, it’s only since the 1990’s that it’s received wide-spread attention and study. 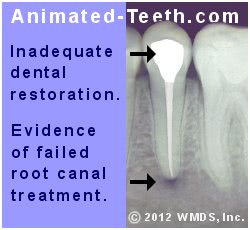 Bacteria seeping past this tooth’s defective filling has caused its root canal treatment to fail.

How big of a problem is it?

Nowadays it’s considered a significant factor in endodontic failure. For example, a study by Hoen evaluated 337 failed root canal cases and determined that 13% of them involved complications with coronal leakage.

But with cases in general, it may be only one factor of several that are involved. Here’s an explanation.

A study by Gillen applied statistical analysis to data collected from published research. The findings of the report were:
But the study also determined that:

Together, these findings imply that:

That conclusion isn’t necessarily surprising. But it does reinforce the fact that each and every step of a tooth’s treatment is interrelated.

Although a tooth’s root canal system does receive an “endodontic” seal during its procedure (by way of the dentist packing gutta percha inside the tooth How this is done.), the integrity of this seal isn’t able to resist the continued assault of contaminants that takes place when coronal leakage occurs.

The following two studies investigated how quickly a tooth’s endodontic seal is compromised when it doesn’t have the protection of any type of coronal restoration (like a filling or dental crown). This would be similar to the situation where a (failed, defective or inadequate) restoration was allowing coronal leakage to occur.

Understanding how the potential for coronal leakage might affect your tooth’s treatment. 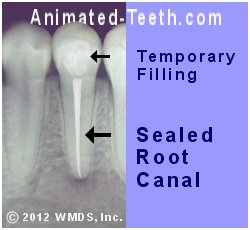 A) Coronal leakage as it pertains to temporary dental restorations:

Once your root canal therapy has been completed, your dentist will need to place some type of temporary restoration that will create a seal that protects your tooth’s work until that point in time when a permanent one can be placed.
You need to be aware of the temporary nature of this restoration and the time frame over which it can be expected to maintain its seal.
You’ll need to ask your dentist for details (that will be based on the type of temporary filling material that has been placed) but it may be as little as 3 weeks. (AAE)

B) Coronal leakage as it pertains to permanent dental restorations:

Generally speaking, your tooth’s permanent restoration should be placed as soon as it is reasonably convenient (in other words, don’t drag your feet on scheduling this procedure).

It’s important to adhere to your dentist’s instructions on this matter. Their recommendation will be based on the type of interim restoration they have placed in your tooth’s access cavity and the time frame they feel they can rely on the seal it creates.

The restoration they place will need to:

What types of restorations can meet these requirements?

After an evaluation, your dentist will make a recommendation as to what type of restoration they feel should be placed. (We discuss factors related to making this decision here: Rebuilding teeth after root canal treatment. Options.)

Generally speaking, there are three alternatives that might be utilized. 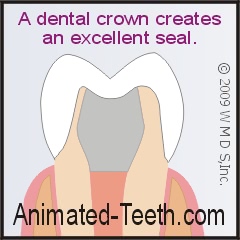 A dental crown can establish an excellent seal but not all root canalled teeth require one.

Which makes the best choice toward preventing coronal leakage?

In terms of creating a predictable, lasting seal, there is no question that placing a brand new dental crown makes an excellent choice. But this procedure is too aggressive for teeth that don’t otherwise require this type of restoration (see “rebuilding” link above).

Choosing to patch an existing crown through which the tooth’s root canal treatment has been performed makes the least predictable choice. We explain the reasons why here. Pros / Cons