Measuring the ‘working length’ for root canal file use.

– Your dentist will need to measure the length of each canal they treat. Here’s how they do it. | Using x-rays to make the measurement. | Using an electronic apex locator. | What is this process like for the patient?

As we explain in our outline of the root canal procedure The steps., it’s important for a dentist to clean the entire length of each root canal they treat. But it’s also just as important that they don’t use their files beyond this point (beyond the tip of the tooth’s root).

This page explains how a dentist makes that calculation. How they measure the proper “working length” of a canal.

There are two primary methods that a dentist typically relies on to make working length calculations.

One of them is the traditional method of positioning a root canal file in the canal, and then taking an x-ray picture of it. (The first use of this method actually dates all of the way back to 1899. [Ingle])

The other involves the use of a device called an “electronic apex locator” (EAL). (The term “apex” in this context refers to the tip of a tooth’s root.)

While EAL’s were first introduced into clinical practice around 50 years ago, these types of units have only been in widespread usage in dental offices since the 1990s.

It’s interesting to note that the development of electronic devices hasn’t supplanted the need for the continued use of the traditional method of taking an x-ray.

An influential study by Martinez-Lozano (2001) that compared dentists’ ability to interpret the findings of both methods concluded that neither was completely satisfactory in aiding them in determining a canal’s true working length.

That doesn’t mean that these techniques don’t have merit. Nor does it mean that improvements haven’t been made in the reliability and accuracy of EAL’s since then. But this finding does reflect what appears to be the continued consensus of the dental community. That is, a dentist will gain the greatest amount of available information by using both methods together (Hargreaves). So expect your dentist to do just that.

A) Making working length calculations via the use of x-rays.

This method simply capitalizes on the fact that metal objects are easily visualized on dental radiographs.

(Dense metal objects block the passage of x-rays. That means that the portion of the film/detector that lies opposite the object won’t be exposed/triggered. As a result, the outline of the metal object will appear white in color on the x-ray picture.)

How a dentist takes a measurement.

(The measurement process can only take place after your dentist has gained direct access to the interior of your tooth and the openings of its root canals. Per our outline of the root canal process (see link above), that involves completing Steps 1 through 3.) 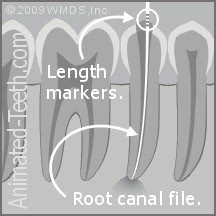 X-ray of a tooth with a file in place.

A = The metal portion of a file. 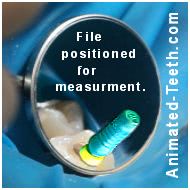 The stopper is positioned over the corresponding file marker.

What if the x-ray shows that the file hasn’t been positioned perfectly?

You may be wondering what happens in the case where the dentist’s initial estimate was wrong and the file doesn’t extend to the canal’s end.

That’s not really all that much of a problem and there are a couple of solutions that exist.

Overall, the whole process of establishing a canal’s working length via the use of an x-ray should be a minimal event for you.

This process is performed well into your tooth’s root canal procedure, and long after you’ve been numbed up. So feeling something (like the file being positioned) won’t be an issue.

The act of taking the x-ray isn’t necessarily a quick process. Your dentist will first need to loosen the rubber dam What’s this? that’s been placed for your procedure, position the x-ray film/detector next to your tooth (you’ll probably be asked to hold it in place with your finger), snap the picture, and then reconfigure the rubber dam.

The process of disassembling the dam for x-ray placement has some potential consequences (we discuss them below). In comparison, taking an electronic measurement (also explained below) is much quicker, does not require dental dam disassembly, and requires no participation on your part.

In recent decades, the use of electronic length-measuring devices has become commonplace. These units are referred to as “electronic apex locators,” or just EAL’s. (The word “apex” refers to the tip of the tooth’s root.)

Since the 1960s, EAL’s have taken various forms, with each next-generation unit typically relying on similar, yet more advanced, electronic circuitry.

(For example, progressing from just measuring resistance to impedance. Also, newer designs overcome issues such as the presence of tissue, blood or other liquids in the canal (all are conductors of electricity). [Ingle – linked above.])

How a dentist takes a working length measurement using an electronic apex locator.

While how any specific type of unit might be used may vary, our description here explains how they are generally used.

(The measurement process can only be performed after your dentist has gained direct access to the interior of your tooth and its root canal system. Per our outline of the root canal process (see link above), that involves completing Steps 1 through 3.)

A = Metal shaft.
B = Measurement markings.

Despite the fact that an apex locator is an electrical unit, its use is a non-event for the patient. You won’t feel a thing. And, in fact, using one is a plus because it typically makes performing your procedure quicker and simpler.

The use of both methods is generally/usually the best plan.

Having an electronic apex locator available doesn’t mean that the technique of determining a canal’s working length via x-ray isn’t needed or shouldn’t be performed.

For these reasons, expect your dentist to use a combination of both methods.

Since originally writing this page, the COVID-19 pandemic has become an issue worldwide. And that fact is transforming the way dentistry is practiced. (Not just from the standpoint of COVID-19 but also with the possibility of future pandemics in mind.)

In regard to the issue of root canal length measurement, it must be pointed out that a great advantage of determining this value electronically is that this technique is performed under the isolation of a rubber dam. (The method that dentists use to prevent oral fluids from contaminating a dental procedure’s work environment.)

In comparison, when an x-ray is taken, the tooth’s dam must be partially disassembled so the x-ray film or detector can be positioned inside the patient’s mouth. Unfortunately, this process creates an exposure of the dental office environment and staff to the patient’s potentially infected saliva and oral aerosols (like those created by coughing).

By no means does this mean that radiographic apex determination should not be used for cases. But the added exposure taking x-rays creates to patient oral fluids will no doubt encourage your dentist to lean toward the use of an electronic apex locator whenever possible.