Causes of root canal treatment failure. – Reasons why completed endodontic therapy may prove to be unsuccessful. –

An overview of the kinds of procedural difficulties and errors most frequently associated with failed cases. – What can go wrong? Why? What can be done?

Why has your tooth’s root canal treatment failed?

This page explains issues that are frequently identified as being the causative factor(s) in the failure of a tooth’s endodontic therapy.

Unsuccessful cases generally involve a situation where there is some type of deficiency associated with one (or both) of these fundamental goals of endodontic therapy:

It may be that procedural shortcomings or complications have prevented the completion of the tooth’s work according to the standards needed. Or issues associated with the tooth’s preoperative condition may have created obstacles that prevented the tooth’s successful treatment.

What can be done for failed cases?

With each reason for endodontic failure, we also explain how the tooth’s situation might be remedied. Generally, there are only two options, extraction or case retreatment (conventional or surgical). This page explains in greater detail what those options may entail: What’s the fix for failed root canal treatment? Possible options.

Examples of specific reasons why root canal treatment may fail.

Different types of teeth (molars, premolars, canines, incisors) characteristically have differing numbers of roots and root canals. What’s normal? | Variations. But unfortunately for the treating dentist, there are no hard rules about the configuration that actually exists.

The back root (root “a”) of a lower molar may have one or two canals. 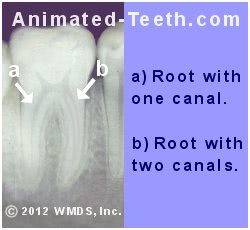 If it has two but both aren’t found, its root canal treatment will fail.

A dentist’s due diligence.

The problem/question that arises is how much effort a dentist should reasonably expend in searching for these, possibly rare, variations.
As a point of fact, additional canals are frequently tiny in size and as such difficult to identify. Additionally, they may have a location inside the tooth that’s strange or unexpected.

For these reasons, it’s easy enough to understand why a dentist might not be astoundingly inquisitive if the configuration they have already discovered lies within the parameters of what can be considered normal for the tooth involved.

The crux of this issue is simply that any untreated (overlooked, undiscovered) canals, no matter how minute in size, will remain a locus of persistent infection.

And as such, that leaves the expectation that they will lead to the failure of the tooth’s root canal treatment.

An endodontist using a surgical microscope.

Once the untreated canal(s) has been identified, conventional retreatment of the case The process. is frequently successful.

The anatomy of the root canals inside a tooth can display variations.

With both of the above variations, it’s common that the division of the canal isn’t identified (they typically aren’t observed on x-rays). And even when detected, it may be difficult, or even impossible, for the dentist to adequately treat (clean, shape, fill) the branch.

If that’s the case, and just like with missed canals discussed above, the result will be one where some of the tooth’s root canal system is left ineffectually treated. As a result, the deficient portion can provide a location where infection can persist and therefore act as a continued irritant to the tissues that surround the tooth’s root, ultimately leading to case failure.

The root canal systems of any and all teeth have the potential to include accessory canals in their configuration. (They form when tissues that play a role in root formation become entrapped during the calcification process.) And their existence is quite commonplace.

An evaluation of 493 extracted teeth by Ricucci determined that 75% of them had accessory/lateral canals.

The question then arises, if they are so common, and they are difficult to clean and fill, why aren’t they a dominant factor in root canal failure.

As one might expect, studies suggest that the size of the accessory canal and the contents they harbor (such as microorganisms and their byproducts) are key determinants in the outcome for the tooth.

Once the untreated canal(s) has been identified, it may be possible to successfully retreat the case conventionally. In some cases, surgical retreatment Explained. (a process where the problematic portion of the root is trimmed off) may be needed. 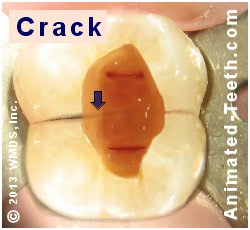 Some cracked teeth may not be treatable.

Cracks that extend into a tooth’s root can be colonized by bacteria. But unlike root canals that can be cleaned and sealed off, there’s no way to treat the minute spaces created by cracks.
That means that once they’ve been invaded by bacteria, the infection that results due to their colonization can’t be cleared up. It will be a persistent source of irritation to the tissues that surround the tooth’s root.

As such, the tooth’s outlook is one of case failure. Short of amputating the affected root (if this option exists at all), case retreatment/further treatment is generally not possible.

There are several issues that can make dealing with cracks especially difficult:

Tooth extraction is often the only option. With multi-rooted teeth, it may be possible to salvage the tooth by cutting off the problematic root (root amputation).

The integrity of the seal created inside a tooth during its root canal procedure is an important factor in treatment success.

It may be that the tooth’s intact seal has deteriorated over time. Or that the placement of its filling materials resulted in shortcomings initially (due to underfilling, the presence of voids, etc…). And while there can be technical reasons why underfilling a canal has occurred, deficient fills can generally be expected to correlate with the level of clinician expertise.

What’s the solution for cases that have failed because they have lost their endodontic seal?

Conventional retreatment is often successful with these types of cases.

5) Overextension of the tooth’s filling material.

Studies have shown that in cases where the materials used to fill in and seal a tooth’s root canal system extend out beyond its root’s tip (overfilling, overextension), the likelihood of endodontic failure is increased. (Tabassum)

The basic problem involved with this issue is one of bioincompatibility. Due to the presence of the materials, a foreign body/inflammation response may be triggered in the tissues surrounding the root’s tip.

This response doesn’t occur in all cases. And in fact, it’s possible for normal and complete postoperative healing to occur in the presence of an overfill.

As a final point, while it’s true that in clinical practice unforeseen events sometimes occur, generally speaking, the ability to properly confine root canal filling materials within a tooth must be considered a factor that correlates with the clinician’s level of experience and skill. (See specialist vs. general dentist discussion below.)

What’s the solution for cases that have failed related to the overextension of root canal filling materials?

Successful conventional retreatment of the case may be possible. In situations where the gross overextension of materials can’t be retrieved, surgical retreatment may be necessary.

A defective or inadequate final restoration (the “permanent” one placed after the completion of a tooth’s endodontic treatment) can allow bacteria and other contaminants to reenter the inside of the tooth. (The x-ray graphic above shows an example of this situation.)

This phenomenon is referred to as “coronal leakage” and it is a major cause of root canal failure. For more information, use this link: What is Coronal Leakage? Causes. | Prevention.

Even the highest quality root canal work can’t survive (resist reinfection of the root canal space) if its tooth’s permanent restoration doesn’t provide an adequate seal. The study by Hoen cited above reported that 13% of failed cases involved complications with coronal leakage.

What’s the solution for cases that have failed because they have lost their coronal seal?

7) Other types of technical shortcomings with the tooth’s procedure.

Beyond the clinician-associated issues mentioned above, other technical/procedural errors and complications can arise and have a detrimental effect on the treatment outcome of a tooth. This might include:

The study of 90 endodontic failures by Iqbal cited above determined that about 6% of the cases could be attributed to problems associated with perforations, and 7% broken instruments.

If the dentist thinks that they can overcome or correct the previous difficulty, then endodontic retreatment is indicated. If not, the tooth will need to be extracted. Why?

Research suggests that treatment performed by endodontists (root canal specialists) tends to have a higher success rate Study findings. than that provided by general dentists.

For example, the study by Iqbal cited above that evaluated failed cases determined that roughly 80% of them had been attempted by general dentists. (See additional statistics below.)

Why referral to a specialist may make sense.

Any dentist can tell you, providing endodontic therapy for some teeth will prove to be amazingly straightforward, and then for others surprisingly involved. Unfortunately, a tooth’s level of difficulty can’t always be predicted.

For this reason, some dentists may feel they can boost their patient’s chances of success by referring suspect cases on to an endodontist before complications arise. Per the data found on our failed root canal page Statistics., this might be an especially prudent choice for certain types of teeth (like molars).

Additionally, our page “Endodontist vs. General Dentists- Which makes the best choice, and when?” How to choose. discusses this issue in detail. 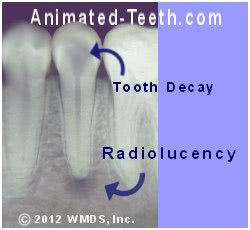 Teeth having pre-op radiolucencies may be more likely to fail.

A tooth’s initial status may play a role in the ultimate success or failure of its endodontic work. One such concern involves teeth that have a “periapical radiolucent lesion” (see picture).
These types of lesions may continue to harbor bacteria despite the successful completion of the tooth’s root canal treatment. If so, this (external to the tooth) locus of infection will be a persistent irritant to the surrounding tissues.

The Iqbal study cited above suggests that the success rate of teeth having this initial condition (vs. those that don’t) may be lower, on the order of 20%.

In cases where the dentist’s evaluation of the quality of the tooth’s previously performed root canal treatment seems acceptable, the solution for this situation may be a minor surgical procedure referred to as an “apicoectomy with retrograde filling.”

During this procedure, the tip of the tooth’s root is trimmed away (an apicoectomy is performed). The exposed root canal opening on this trimmed surface is then sealed by placing a filling (a “retrograde” filling).

It’s possible that your tooth’s root canal treatment has been successful but the tooth itself has problems due to other factors.

a) The tooth has broken or fractured.

Teeth that have undergone root canal treatment are typically considered less structurally sound than they were originally, possibly substantially so. And for this reason, they often require the placement of a dental crown for strengthening and protection. How it does that.

If an endodontically treated tooth does break, it’s not always a big problem.

b) The tooth has extensive decay or gum disease.

Just like any other tooth, teeth that have had root canal treatment are at risk for the formation of tooth decay and gum disease. And if allowed to advance, either of these conditions can ultimately lead to the tooth’s loss.

If the tooth’s condition can be corrected or overcome, then endodontic retreatment is indicated. If not, then the tooth will need to be extracted.

Iqbal A. The Factors Responsible for Endodontic Treatment Failure in the Permanent Dentitions of the Patients.

Ricucci D, et al. Fate of the tissue in lateral canals and apical ramifications in response to pathologic conditions and treatment procedures.